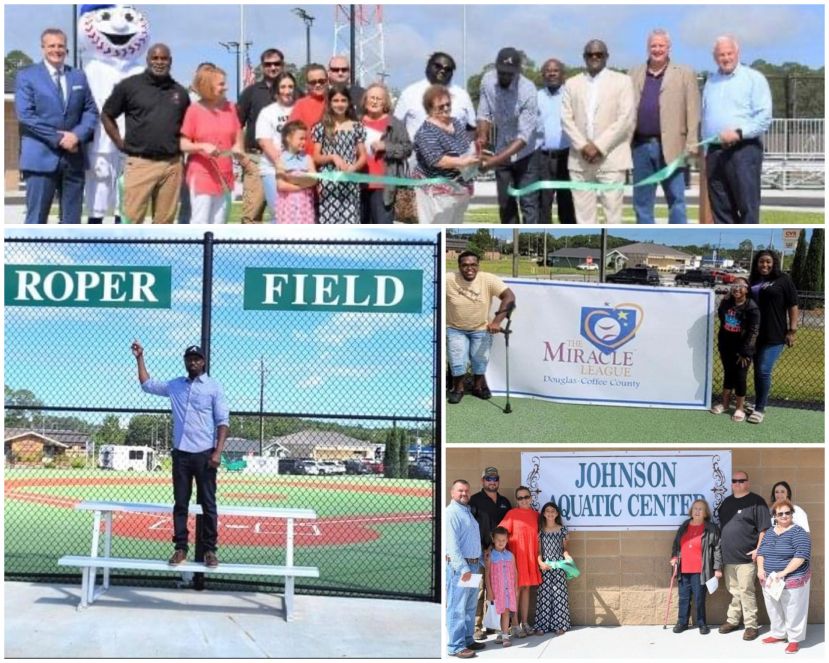 On Friday, May 27, 2022, the City of Douglas held a historic ribbon cutting in Douglas and Coffee County to officially re-open Davis-Wade Park and introduce the community to the new Roger C. Johnson Aquatic Center and Roper Miracle Field. Many citizens were on hand to celebrate the occasion with family members of the late Parks and Recreation Director, Roger Johnson, and the late City Commissioner Johnnie Lee Roper.

The ceremony got underway with Mayor Tony Paulk presiding and welcoming everyone to the occasion. "To see this day has filled my heart with many emotions", stated Douglas Mayor, Tony Paulk. "I would have loved for Mr. Roper and Roger Johnson to be here with us today rather than have to posthumously display this level of recognition. I, along with all city commissioners, are pleased with the outcome of renovations to this park and are proud to provide this high-quality aquatic facility and play area for people with special requirements". Mayor Paulk went on to say that a capital improvement of this nature does not happen without the vision of leaders and a unified community. He gave special thanks to Charles Davis, City Manager, Stevie Young, Parks & Recreation Director, and so many others who played a role in the fruition of the Davis-Wade Park renovations. Before ending his statements, Mayor Paulk quoted a popular quote from Mr. Roper, "If you see a turtle on the fence, someone had to put him there.”   Mayor Paulk encouraged those in attendance to reach out to help someone in need.

Improvements at Davis-Wade Park began in July 2021 and were completed on April 30, 2022.  The new aquatic center, named after the late Roger Johnson, features an eight-lane competition swimming pool, a new pool house, and a baseball-themed splash pad. The Miracle Field has now been named Roper Field after the late Commission Johnnie Lee Roper.  Roper Field features a Miracle Field for special needs sports play and an ADA playground.

The city received a $100,000 Land and Water Conservation Fund grant from the Georgia Department of Natural Resources to assist with funding the Miracle Field.  Donations from local citizens, Premium Waters, ESG Operations, Waste Industries, Southwire, Douglas Lions Club, and other donors also contributed funds to construct the Miracle Field.  Special thanks to Lewis Construction Company, Harper & Company Builders, and everyone who helped to fulfill a vision of local leaders where dreams have come true for every child and citizen to have a place to recreate.