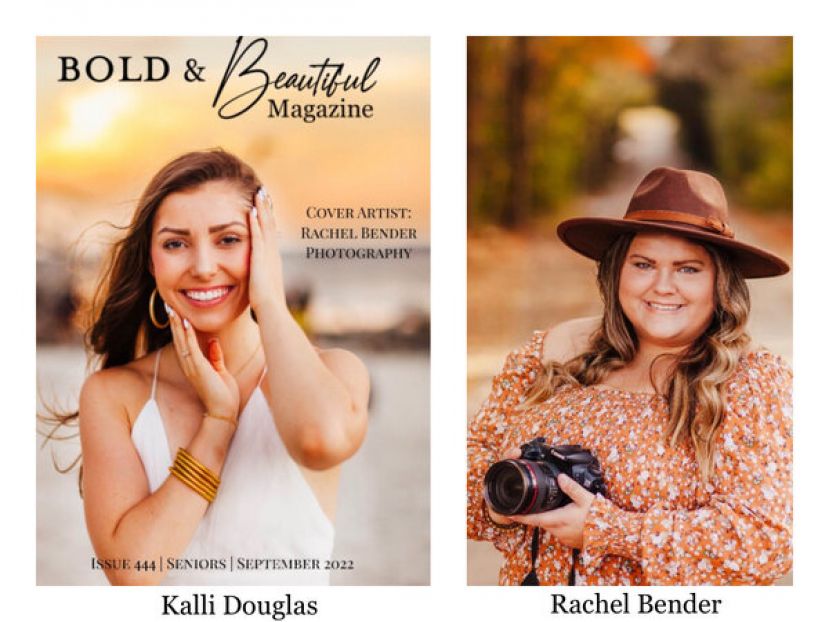 The edition features senior pictures of 12th grade students from across the nation, with Bender's image of Kalli the cover page. Four other local seniors Bender photographed were also featured in the special, including Evan Coffee, Ada Wooten, Madeline Morris and Gracelyn Day.

Bold & Beautiful, according to its website, was created by a photographer to help other inspiring photographers. The creator said the magazine can be used as a creative outlet for a chance of aspiring and established photographers to see their work in a printed publication and help gain clientele.

Bender refers to herself as a "lifestyle photographer" who grew up in the industry, with her mother being a photographer for 20 years. In 2018, Bender said she "began to educate herself" in all aspects of photography as a creative way to capture and preserve all of her memories with her children as they grew up. What began as a hobby eventually turned into a career when she started her own business, Rachel Bender Photography. Bender's photos have previously been featured in other magazines, with her work being selected as the back cover of Chasing Light Magazine last month.

After the cover was revealed, Bender told DouglasNow, "I am so excited to see the hard work I've put into photography pay off in such a big way. I'm also very thankful for all of my amazing clients that have trusted me to capture all of their most important milestones!"

The image of Kalli was taken during a senior photoshoot last month at Driftwood Beach on Jekyll Island. Bender stated that she "ran home" with excitement the night of the shoot to edit some of the "stunning" pictures, and submitted the awarded photo to the magazine shortly after. The cover was revealed on the Bold and Beautiful's social media page on September 20.


Kalli is the 17-year-old daughter of Kevin and Karla Douglas and a life-long resident of Coffee County. She is an active member of the school's varsity cheerleading team, Leo Club, Key Club, National Honors Society, an HOBY Youth Scholar and the FFA secretary. She will graduate next May and then plans to attend South Georgia State College to pursue a career in nursing. After graduating from SGSC, Kalli would like to continue her education to become a nurse practioner.

"I am so honored that my senior photo was selected to be on the cover of Bold and Beautiful. Rachel Bender is an extremely skilled photographer who made the shoot so much fun and the image she captured selected as the cover is most definitely deserved. I am so grateful that she submitted the picture and that the editors of the magazine recognized how talented she is!" Kali commented.