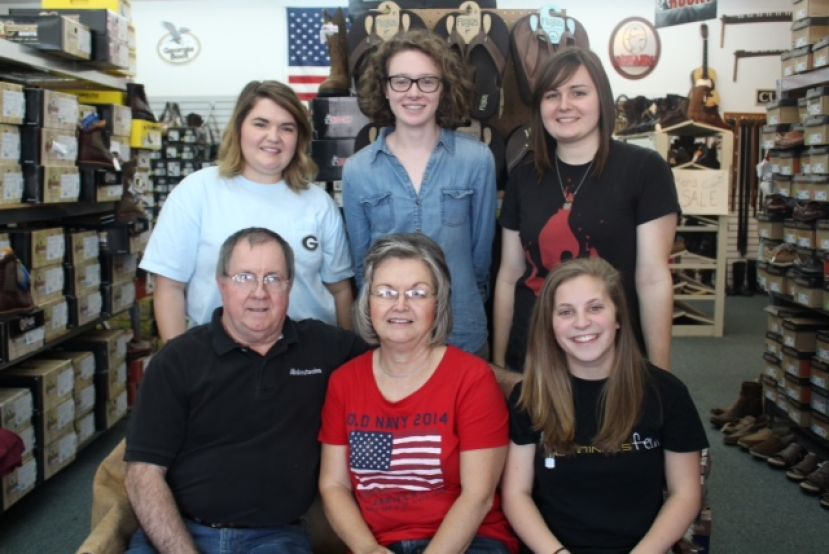 Allaboutsoles is celebrating its 10-year anniversary this month. The shoe repair and retailer opened its doors on Thursday, May 5, 2005, after much prayerful consideration by owner John Mathews. John’s wife, Sue, was unsure of this undertaking but she tried not to be negative.  She knew from past experiences that John was a good manager, planner and worker. With a few shoes and a lot of prayers for success, the Mathews family began their business journey.

Initially, John didn’t plan on doing shoe repair. He wasn’t a shoe repairman and didn’t know much about the trade. However, during that first week Allaboutsoles was opened, people kept bringing in shoes for John to fix. John had time on his hands and so he began fixing shoes.  He studied, talked to older shoe repairmen, and worked with John Morgan from Blackshear.  Mr. Morgan was excited to help John Mathews because shoe repair business was and is a dying trade. It is a needed business, but few want to take it up.  As the Lord often does, He was sending the Mathews family on a path they had not planned on traveling.

As business grew, John needed help. He asked his daughter, Rebekah, to help him sell shoes.  She was a junior in high school and was homeschooling at the time, so they were able to arrange a schedule that allowed her to work and get her schoolwork done. In October of 2005, John realized he needed even more help. Sue joined them at the store for a few hours most days.  And Allaboutsoles took off.

Over the last decade, the Mathews family has seen God make a way in situations that left them puzzled and looking for answers. To John and his family, it was just a confirmation that they were where they needed to be doing what they needed to be doing.  One particular situation, a friend came by to encourage John and John told him of a seemingly impossible situation. The friend said, “Let’s pray.” Later that same day John received a phone call that entirely changed the store. God has blessed Allaboutsoles throughout the last 10 years in ways too numerous to name. There was another friend that would come in often and talk to John about things that needed to be done or listen to John’s ideas and help him work through them.  He was also another great encouragement to John and the Mathews family.

Within two short years, Allaboutsoles had outgrown its original location.  John’s brother, Chapman, had just closed his mattress business at 520 South Peterson Avenue next to Dollar General and Friendly Rental.  It was the perfect size. They needed a bigger place for shoe repair and to display new brands of shoes they were carrying. During the week of July 4, 2007, Allaboutsoles moved to its present location. Though the Mathews family didn’t ask for help, a family came and helped complete the move. “We couldn’t have done it without them! We didn’t realize we needed help, but God did and He sent friends,” recalls Sue.

Now, 10 years later, the Matthews family has struggled, been blessed, and through it all worked hard to serve their customers. Allaboutsoles is not a self-serve store.  John, Sue, and the rest of the staff want to measure your feet to make sure you are getting the right size. They want to understand what exactly your problem is or exactly what kind of shoe you are looking for. It is amazing to see the different repairs that can be done to help you stay in that comfortable shoe a little longer.

They now have two full time employees and one part-time staff member in shoe repair.  Sarah, John and Sue’s daughter, began full time in January 2014. Through it all, they know they are blessed with many faithful customers. “God has provided for us in amazing ways.  We know our success is due to God leading and blessing us,” states Sue.