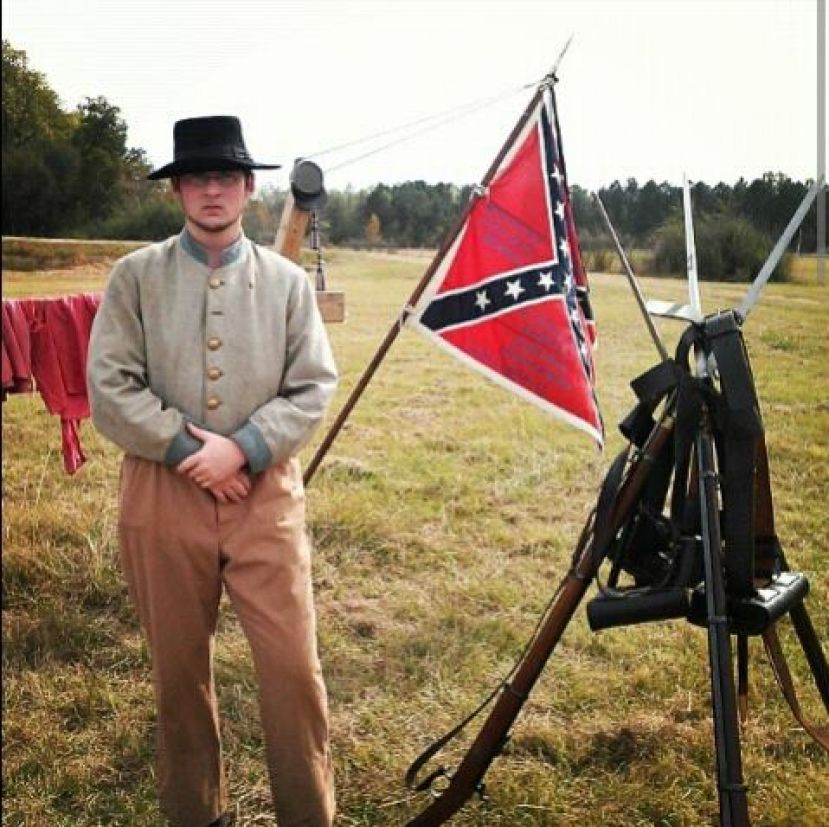 Chris Adams, who will graduate from Coffee High School on Saturday morning, will spend Sunday, May 24, retracing the journey his great-great-great-great grandfather, Aaron Ricketson, took from Coffee County to Thomasville in order to regain his citizenship following the end of the Civil War. Adams is a living historian with the 12th Georgia Company C out of Irwinville and as such is recognized as a Confederate soldier with the Army of Tennessee. As a member of this group, Adams is one of the last living Confederate soldiers.

Aaron Ricketson, who lived in Coffee County when the Civil War broke out, was a private with the 63rd Georgia Regiment Company K, Coastal Defense Unit. A number of Coffee Countians belonged to this unit. Private Ricketson, who enlisted in the Confederate Army in 1862, was a combat-hardened veteran who saw action in some of the war’s bloodiest battles, including the shelling of Fort Wagner in South Carolina. Ricketson was inside Fort Wagner for nearly 12 hours as the Union Army pummeled the fort with thousands of rounds of artillery fire.

In 1863, Private Ricketson returned to Coffee County on furlough. While he was home, his unit split after suffering heavy casualties in General William Sherman’s Atlanta Campaign. They were incorporated into other units and ended up surrendering to Sherman’s forces a short time later. Unable to return to his unit, Ricketson was labeled a deserter and had to avoid capture from both Union troops and a local militia headed by Judge Daniel Newbern, whose primary goal was to round up Confederate deserters and send them to prison. Ricketson sought shelter in Atkinson County’s Roundabout Swamp, where a colony of Confederate deserters lived. Prior to the war, Ricketson had made a small fortune in cattle. From 1863 to 1865, Ricketson used his connections in South Florida to bring cattle from the Lake Okeechobee area to South Georgia to feed Confederate troops.

Following the war, Ricketson moved to Texas where he became a Texas Ranger. He built a new life for himself in the Lone Star State and became very wealthy. He returned to South Georgia just once after the war, in 1913 to visit family. He is buried in Burnet County, Texas.

“I won’t be walking or riding a horse. I’ll be driving my iron horse,” laughs Adams. “This is a small way for me to recognize something that one of my ancestors did in service to a cause he believed in. After the war, he made a tremendous contribution to society and, like so many other Confederate soldiers, helped build the country we live in today.”