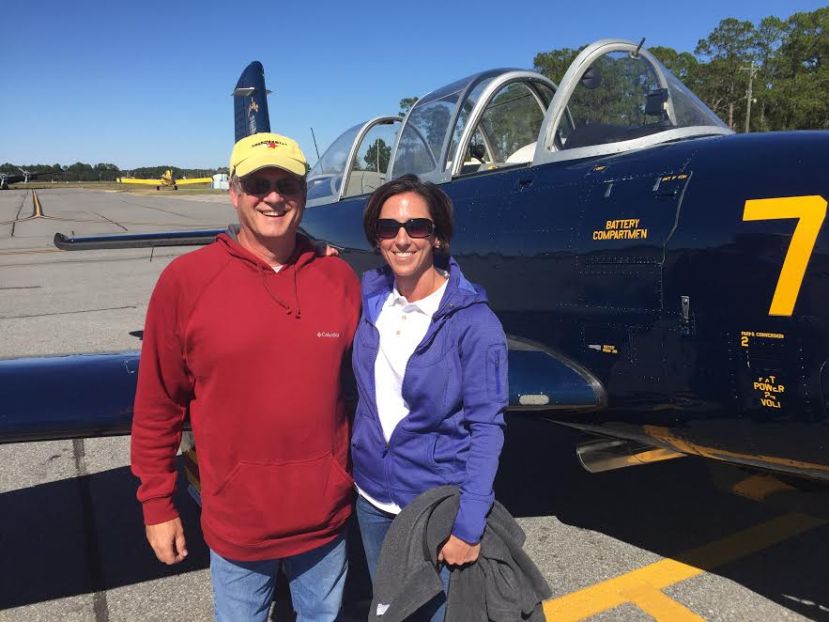 Robert Preston, Jr./DouglasNow.com Lt. Col. Christine Mau, the first female F-35 pilot. stands with Paul Hunt after taking the P-34 behind them up for a short flight.

Saturday afternoon, my family and I visited the Douglas Municipal Airport while the open house was in full swing for the 63rd AAF Flight Training Detachment reunion. This year was the final year of the reunion; the flight training school’s cadets (is that even the right word to use in this context?) are now of an age that makes travel nearly impossible for them.

The base was in operation during World War II. From 1941-1944, as many as 10,000 cadets received flight training at the school. Classes were nine weeks long, and during this time, cadets received primary flight training before moving on to further their instruction. There were about 55 of these schools around the country. The Raymond-Richardson Aviation Company, a civilian firm, operated the school but the Army Air Force oversaw the training and curriculum.

After receiving their basic flight training here in Douglas, cadets would move on to other bases for more specific instruction. These cadets were among the bravest men our country has ever known, and each year, surviving members of this elite fraternity travel to Douglas for a reunion. Now, 71 years after the end of World War II, these reunions will take place no longer.

This year, Lt. Col. Christine Mau, the first female F-35 pilot, spoke at the dinner to kick off the weekend. Lt. Col. Mau stayed in town for the weekend and practiced her craft on an old P-34 in the skies above Douglas Saturday afternoon. Mau was part of the first all-female combat sortie while with the 389th Expeditionary Fighter Squadron. Their mission was to provide air support to coalition and Afghan forces. This entire mission was carried out by women, from the pilots and weapons system officers of the two F-15E jets to the mission planners and maintainers. As decorated a pilot as Mau is, even she was in awe of the company around her this weekend.

It’s hard to put into words watching those cadets and their families Saturday afternoon. Many were in such poor health they could hardly get around. Yet they were here, remembering what for many was the most significant period of their lives. These men altered history and preserved the freedoms we now enjoy.

It was bittersweet watching the cadets and their families interact with each other. The years and mileage have taken their toll. These once proud warriors are now elderly, stooped, and fragile. As we stood on the tarmac at the airport, my brother looked at me and said, “You know, I bet these guys have seen some unbelievable things. I can’t image what they went through.”

Most of us cannot fathom what these men had to do when they were but boys. Generations of fighters have followed but none have been asked to do what the soldiers of World War II did. The 63rd AAF museum will live on. But without the reunion, without the men and women who worked and studied at the base returning each year, something will be missing. Unfortunate though it may be, it’s the way things are.

Time is undefeated and untied, even for the bravest of the brave.