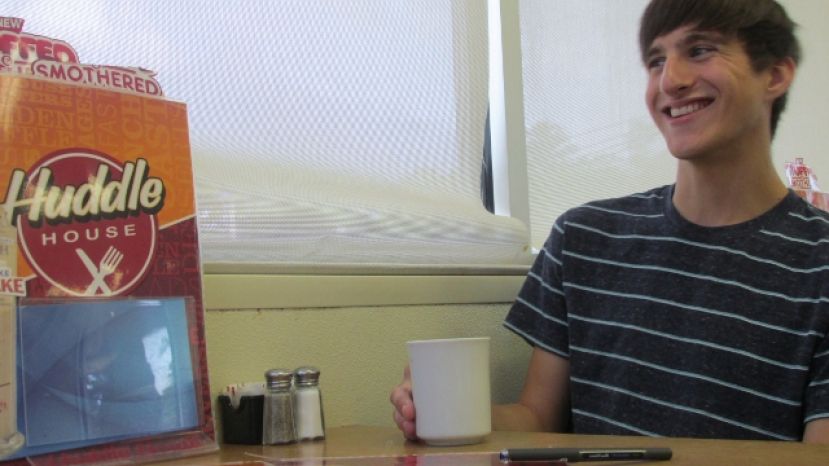 While most teens are spending their summer vacations watching television, sleeping late or playing video games, Bryce Carver is traveling and working on his career as a film director.

Currently, he is working with Director Sidney Bryant on a movie being filmed in Fitzgerald.

"I work behind the scenes with lighting and in the grip department," Bryce says. "It has been such a learning experience.  It is a Christian-based action-thriller, and it is exactly the kind of motion picture I would like to direct some day."

He says he has been impressed with how helpful all the locals are in Fitzgerald.

"Everyone is so willing to help us out while we work on the movie.  The local law enforcement, business owners and just regular individuals go out of their way to lend us a hand every chance they get."

The film, Surrender, is a story that Sidney Bryant started writing in 2013 to help raise funds for his church to build a local community center in Fitzgerald. All of the crew and actors are volunteering their time to help produce the film. One such volunteer is Bryce.  While Carver is helping others by volunteering with the film production, he is gaining valuable expereince for his own future.

Bryce's ultimate goal is to produce and direct movies. He is a fan of Steven Spielberg, Sidney Bryant and Tyler Perry, and he sees these individuals as inspiring. He wants to work towards making the kinds of films that are humorous, uplifting and positive.  He enjoys the Christian productions that focus on family, like Fireproof, and wants to be the kind of director that can  bring a small community together to work on a project.

"I like filmmaking because you can create things for people to enjoy and you can make people smile," he says. "There is a lot of negativity in the film world and I would like to change that."

Besides being motivated and inspired by film directors, Bryce credits a lot of people closer to home for his positive attitude and focus.

"Rodney Ragsdale has helped me out a lot," he says.

Ragsdale is in charge of the Technology Student Association at Coffee High, of which Bryce has recently been appointed the reporter. After high school, he has his educational sights set on Georgia State University in Atlanta.  After college, Carver wants to travel and eventually live in a film-friendly environment.

"I want to live in New York," he states. "It seems to be the hub of creativity and a great place to be inspired."

In addition to film-making, he enjoys writing, photography and music.

"I am a guy who likes to express himself, he says. "I have big plans in life, and I plan to do them."

Bryce is a very active church member of Sand HIll Baptist Church, and he takes great pride in his membership.

"I've been going to this church my entire life," he says. "It's a wonderful place with great people."

Bryce has an exceptionally positive outlook on life, despite the recent loss of his father.

He says, "Several friends of mine wonder how I can be so positive after what happened, but I can't take credit for that.  I prayed a lot during his sickness and after his death and God has helped me.  Prayers lift us up."

Bryce holds on to his positive attitude and says that people can learn from their experiences and get something good out of all situations.

"Basically, people can get better or they can get bitter," Carver says.

He describes the loss of his father as a lesson in gratitude and says he is blessed to have had such a great father. He is especially glad that he was able to spend the last year of his dad's life working with him and enjoying his company.

"You can't build your life around hurts from the past", Bryce says.

He plans to write about his dad's sickness, how it affected their family, and how the prayers of family and firiends changed their world.

Bryce has an older brother, Brandon, and creativity appears to run in the family, to which he credits his parents. His admiration for them is evident in almost everything that he discusses.  Whether it is regarding work ethic,  family values or his exceptional attittude about life,  Bryce is quick to point out that his parents and God are the ones that should get the credit for everything.