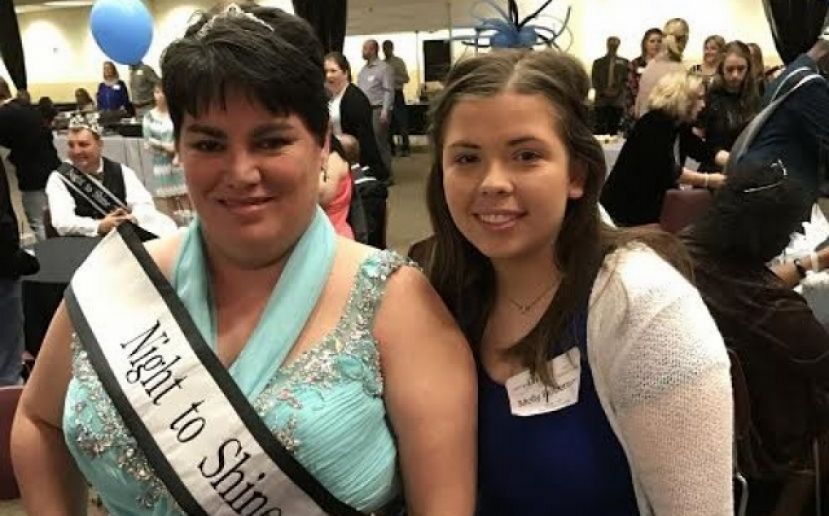 Robert Preston, Jr./DouglasNow.com Cindy Davis (left) was one of about 130 guests of honor at A Night to Shine Friday night. She is pictured with her buddy, Molly Roberson.

Friday night, my family and I attended A Night to Shine with my 14-year-old son, Montgomery. I was unsure of what to expect. I had no idea what the event would entail. I had my reservations about going, as did the rest of my family. Even Montgomery himself didn’t really want to go. “I want to stay at home,” he said every time we asked him about going.

“Force” isn’t really the right word to use but we, ah, strongly encouraged him to attend. After all, events like this will only succeed if people participate. I remained uneasy all week. Something like this can be very special or it can be a complete disaster. People with special needs are singled out their entire lives. As soon as teachers, parents, even friends begin to notice that something is different, those with special needs start to receive the wrong kind of attention.

I’ve noticed it with our son. It has happened at school, at church, even within our family. I was scared that Night to Shine could turn into something very similar – that attendees would be singled out and become spectacles for all the wrong reasons.

Thankfully, my concerns were unfounded.

From the moment each attendee stepped on the campus of Coffee Middle School, they were made to feel unique. The limo ride around the school to the red carpet – it could have been cheesy and silly. It, however, wasn’t. When attendees stepped out of their vehicles and made their way into the gym, volunteers made them feel like celebrities. Many of the honored guests played to the crowd. They knew what was happening and they felt the energy.

The event almost overwhelmed my son. As he exited the limo – something I can’t say that I’ve ever done myself – he saw the people and the cameras, and he could feel the excitement. Montgomery usually doesn’t do well in front of crowds. But Friday night, he held his head high and walked with confidence into the gym.

Each attendee had a buddy – someone assigned to him or her who acted as a personal chaperone. Depending on the needs of the individual attendees, some buddies had more challenging jobs than others. Heather Grantham was Montgomery’s buddy. I’d like to think she had it fairly easy but I’m sure she didn’t. What she did do, though, was make Montgomery feel like he was the most important person in the room. Each buddy did the same thing – they devoted the entire evening to their attendee and made sure they had the best experience possible.

There were plenty of other volunteers at the event. Buddies had to be 16 years old. A number of kids were there and even though they couldn’t be buddies, they interacted with the guests of honor and gave them their undivided attention. At times, Montgomery has a difficult time getting people to play with him. It’s not easy and many children don’t know how to be friends to a peer with special needs. Friday night, however, none of those barriers existed. Montgomery loves balloons. He busied himself playing with the various balloon arrangements. At one time, five or six other kids his age were playing with him, enjoying themselves with no regard for his disability.

He hasn’t had many nights like Friday. People were patient, kind, and compassionate. He played how he wanted to play. Instead of trying to get him to follow their rules, the other kids followed his. Yes, it was unorthodox. But they had fun. They played together. And Montgomery loved it.

Our son’s experience was not unique. All the attendees felt the same way. Many who went were adults, some almost elderly. They had never enjoyed a night like Friday. For many of them, it was the absolute best night of their lives.

Yes, when I arrived at the middle school Friday night, I was uneasy. Those feelings subsided rather quickly. It was an amazing experience, one that I hope comes back around next year.