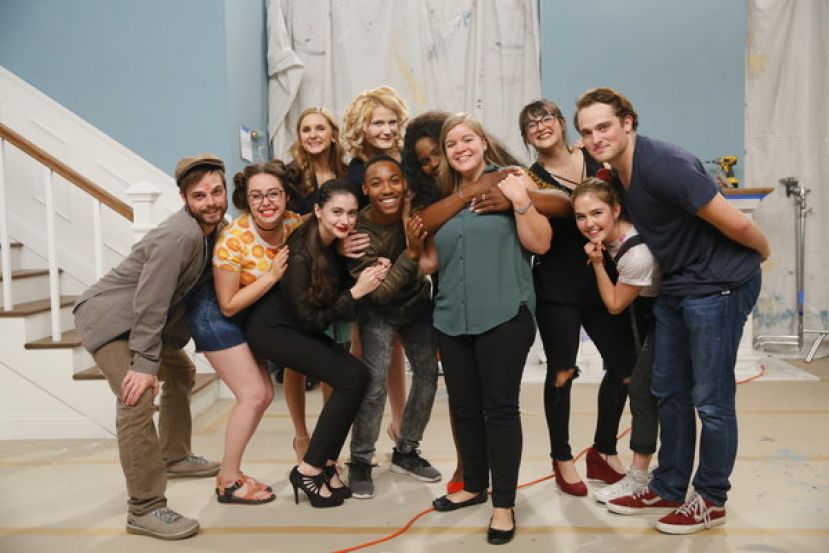 Submitted Photo Anna Braswell, seen in the center, is shown with the cast of 'Nailed It,' the show she wrote while at the Savannah College of Art and Design that ultimately led her to MGM in Los Angeles.

Anna Braswell’s parents, Dr. Randy and Claire Braswell, moved their family to Douglas when Anna was seven. “That summer, my mom took us to audition for Missoula Children's Theatre, because it was free and there were four of us and we needed to get out of the house in the summer,” she recalls. That’s when she began her love affair with the arts. A normally shy kid, young Anna pushed her way to the front and forgot her shyness. She’s been performing ever since.

She was in the band, show choir, and the drama club in high school. She performed in community theater whenever there was an opportunity and while a student at South Georgia State College she was president of the theatre company. Anna minored in theater after she moved to the University of North Georgia in Dahlonega. After graduating from UNG (then North Georgia College and State University), Anna returned to Douglas and took a temporary job at SGSC. While there she was co-advisor for the theatre company and she directed a student production of Neil Simon’s “Barefoot In the Park,” along with several short plays. Anna took a full-time position at SGSC when it became available, but she was on the lookout for a way to further her career in writing and performing.

Anna’s brother Luke and her sisters Sarah and Mary Esther went to Missoula Children’s Theatre with her, but Anna was the only one called to perform. Sarah works for South Georgia State College, Luke is a pastor, and Mary Esther is a physicist. Growing up they all played musical instruments and the whole family performed music in church. Randy still plays piano at Eastside Baptist Church and Claire still occasionally leads worship services. But it’s Anna who’s making her career in the performing arts.

While she was working on her Master of Fine Arts in Dramatic Writing at Savannah College of Art and Design - she began her studies there in the fall of 2015 - her professors held a contest for best television script. Anna’s student television script, “Maisy Does It,” won. It’s about a small-town girl (Maisy) who dreams of Broadway lights. She lands a job as a chorus girl at the Tony Awards, but the show is literally a disaster. Maisy goes home and becomes involved in the local community theater where she has to deal with a colorful cast of local characters. In recognition of her efforts Anna was awarded an internship at MGM Studios in Los Angeles, California. Not the amusement park, mind you, but the corporate office - the place where dreams are made into reality.

The Coffee High graduate spoke with DouglasNow as she had lunch at MGM’s offices in Beverly Hills. She’s come a long way from tutoring English at South Georgia State College, and even further from working at a Douglas dry cleaners. At SCAD, Anna studied dramatic writing in general: plays, films, the stage, but she focused on television, especially situation comedies, commonly referred to as sitcoms.

DouglasNow asked Anna what she most enjoys about writing. “It’s just the love of story and creativity. When you write you can create all the stories that you want and entertain people.” She finds a lot of inspiration in the old Hollywood musicals. Her favorite current shows are “The Middle” and “Speechless.” But her favorite of all time is the classic “Mary Tyler Moore Show,” which originally aired from 1970 to 1977.

When asked how long she was going to stay in Los Angeles Ms. Braswell replied, “Hopefully permanently.” As an intern, she reads submitted scripts, looking for those which show the most promise for future development into MGM television shows.

As Anna is engaged in these creative endeavors, her agent is looking to find her permanent employment. The usual progression is to first land a gig as a writer’s assistant. They do everything from fetching coffee to helping write the story. Her ultimate goal is to become a showrunner. Showrunners have ultimate creative authority as well as management responsibilities for their own television programs. At least that’s the dream. And as far as making dreams come true, Anna Braswell is in the right place.