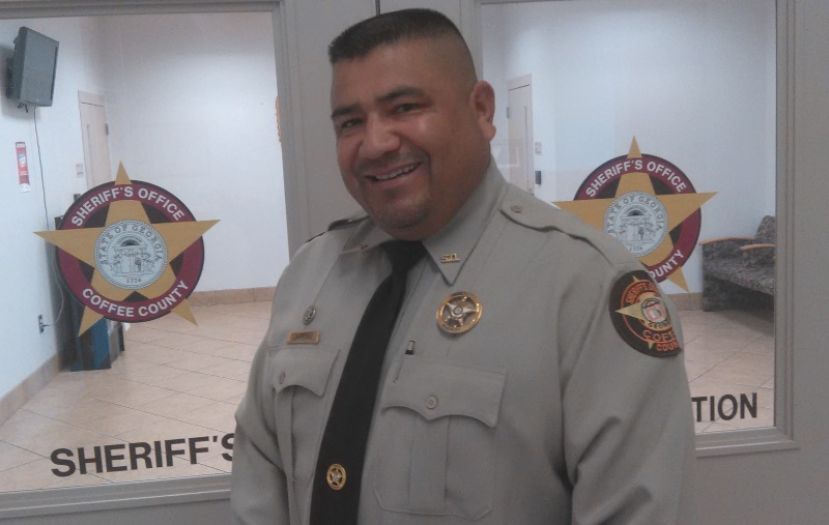 Submitted Photo Deputy Miguel Contreras: The 2017 Officer of the Year

Sheriff Doyle Wooten and the staff of the Coffee County Sheriff’s Office are proud to congratulate Deputy Miguel Contreras on being named as our 2017 Officer of the Year. Deputy Contreras rightfully earned this designation after being overwhelmingly selected by his fellow officers and coworkers.

Miguel began his career at the Coffee County Sheriff’s Office in July 2013, serving as a jail officer before going on to attend the Georgia Regional Police Academy in Tifton. After successfully completing the academy, Deputy Contreras was promoted to the road patrol division in January 2015.

Over the last three years, Deputy Contreras has proven himself to be one of the department’s most respected officers, both within the sheriff’s office and the general community. He is known for his professionalism, courtesy, and high standards in ethics and job performance. He is truly an “officer’s officer” and sets the bar high for upholding the laws of the State of Georgia.

When an officer goes above and beyond the call of duty, people take notice, and Miguel is a prime example. Department officials are often made aware of the many ways Deputy Contreras has stepped forward in the community to offer a kind word, gesture, or a concerned ear ready to authentically listen to the concerns of our citizens. On one such occasion, Miguel was recognized and thanked by the local 911 director for providing a surprise gift to dispatchers working on Mother’s Day.

In a time where law enforcement officers are closely watched, scrutinized, and critiqued, it is a pleasure and comfort knowing that the Coffee County Sheriff’s Office is well represented by Deputy Contreras and others like him. Miguel is highly-valued, respected, and greatly appreciated by both his supervisors and peers, and his fellow officers are proud that he has earned this distinctive honor.

More in this category: « The Martin Centre to host An Evening of Comedy featuring Kountry Wayne Colley on Nov. 5 FBLA members speak at the Coffee County Chamber of Commerce »
Login to post comments