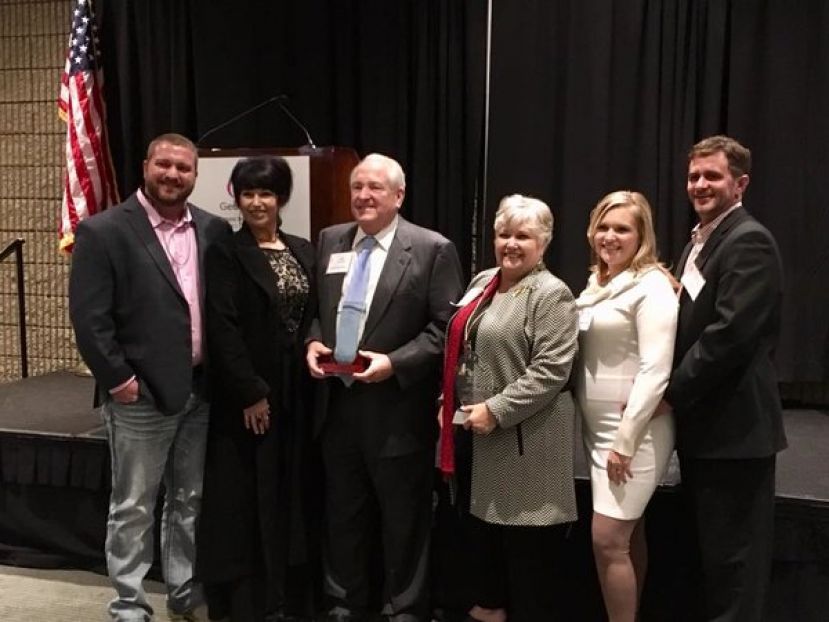 JoAnne Lewis and Luke Morgan were honored with state economic development awards at the annual GEDA (Georgia Economic Developers Association) Awards luncheon in Atlanta on Monday, Nov. 13. Lewis received the Rip Wiley Award for Professional Excellence and Morgan was named the 2017 Volunteer of the Year.

The Rip Wiley Award for Professional Excellence recognizes a GEDA member with at least 10 years of economic development experience for professionalism, honor, integrity, leadership, hard work and contributions to the profession. Lewis was nominated for the award by two current economic developers whom she mentored, Dorie Bacon, Executive Director of the Screven County Economic Development Authority and Andrea Taylor, President & CEO of the Hazlehurst-Jeff Davis Joint Development Authority.

The late H.W. Wiley, or “Rip,” as he was better known, was the industry division director for the Georgia Department of Industry, Trade and Tourism. Rip's main goals were to locate industry in the rural communities of Georgia and to assist communities in initiating efforts that would enable the recruitment and retention of industry. In striving to serve Georgia, he represented the state as a pillar of honor, leadership, integrity, dedication, professionalism and hard work. This award was established upon his death, in 1978, to be presented to the person in economic development who best represents his spirit of excellence and is considered to be the highest honor bestowed by GEDA.

In her retirement, she continues to serve her community and state by investing her own money in a drug rehabilitation facility for women in Douglas-Coffee County.

As Rip's main goals were to locate industry in the rural communities of Georgia, he would be most honored to know that an award in his memory went to one of the hardest working women in rural economic development,” states the nomination letter.

Morgan has been Chairman of the Douglas-Coffee County Economic Development Authority for 22 years, volunteering thousands of hours to lead the community and EDA. He has attended many hours of necessary training for Economic Development Authority volunteers and devoted much time to additional training including attending GEDA events and other economic development training. He is very proud of the stellar reputation Douglas-Coffee County has in the state of Georgia and has played a tremendous part in making our community one of the most successful in regards to rural economic development. Morgan was nominated for the award by Andrea Taylor, former Executive Director of the Douglas-Coffee County Chamber of Commerce and EDA.

Morgan has overseen the construction of three of the four spec buildings constructed and paid for by the EDA The latest spec building finished three years ago is the only one that is vacant. He has been significantly involved in recruiting over 2.500 jobs to the community. Those jobs have been a product of new industrial recruitment: American Insulated Wire (now Southwire), Premium Waters, Premium Peanut, and numerous cargo trailer manufacturers. He has also been involved in numerous industry expansions: Spectrum Distribution (three expansions), Elixir Extrusions (2 expansions), PCC Airfoils (three expansions), and Sunbelt Greenhouses (3 expansions).

Together with JoAnne Lewis, he is responsible for the re-opening of the shuttered Pilgrim's poultry processing facility in Douglas, resulting in the return of over 900 jobs and re-opening of hundreds of poultry houses throughout the region. Luke led the EDA to successfully fight Pilgrim's Pride in bankruptcy court so that our EDA could market the facility to another poultry integrator. Eventually, JBS bought Pilgrim's and the plant in Douglas-Coffee County was the only one of nine plants that was reopened. Without the leadership of Luke at the helm of the EDA, there is no doubt that this plant would have never reopened.

Morgan is retiring as EDA Chairman at the end of 2017 when his City-appointed term expires.