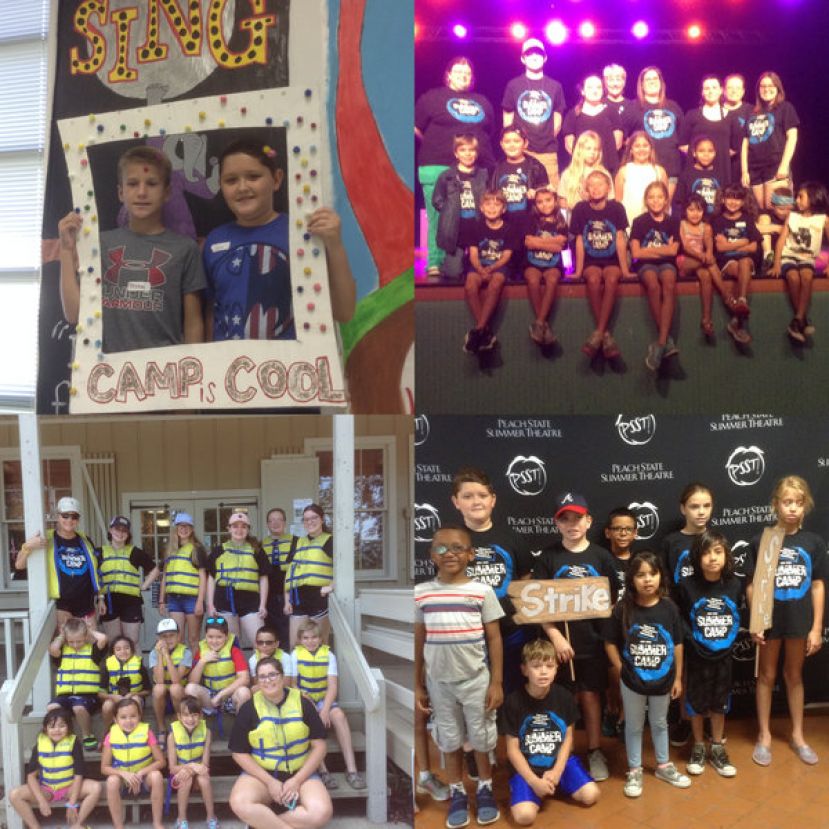 Douglas Parks and Recreation hit the ground running this summer with Camp Cool. Camp Cool is for kids ages 6-12 and it offers a new camp each week of June. Our camps are based on movies and we choose arts, crafts and games that relate to each movie. Each week we stress the importance of being a friend, and not a bully.

The first week of Camp Cool was all about the movie Sing. Sing is about a koala named Buster Moon who finds his theater has fallen on hard times. Being an eternal optimist, he takes one final chance to resurrect his theater by hosting a singing competition. It’s a heartwarming tale about friendship and reaching for your goals, even when it seems impossible. Campers made crafts and art projects, like guitars and their own Hollywood Walk of Fame star. But the highlight of the camp came on Thursday when we lit the stage up at the Martin Theater. Campers performed in a talent show which showcased art, singing, dancing, and even a slime tutorial! We have some very talented kids in Douglas! Thanks again to the Martin Theater, who helped make these kids feel like stars for the day. At the end of camp, the kids voted on the camper of the week. Camper of the week is someone who has been a good team player, a good friend, and who has followed directions all week. The kids voted Johan Salazar as the camper of the week for week 1: Sing.

“If you want to view paradise, simply look around and view it.” Most everyone will recognize this quote from one of the most popular movies in history. The second week of Camp Cool was full of candy, games, and a few Oompa Loompas as we focused on the movie Willy Wonka and the Chocolate Factory. The kids got to make candy sculptures out of real candy and got to paint a decorative glass mushroom. They also had a blast making shrinky dinks, where they drew pictures on plastic sheets and watched them shrink in the oven, just like Mike Teevee did on the movie. On Thursday, campers got to go to General Coffee State Park, where they rode in the canoes and kayaks and even got to swim in the lake! The kids had a lot of fun walking around and looking at the animals all over the park and luckily nobody turned into a blueberry! The campers voted Grayson Taylor the camper of the week for week 2: Willy Wonka and the Chocolate Factory.

For week 3, we went under the sea to be part of their world in The Little Mermaid. Mermaid tails, 2D canvas art featuring Ariel, Flounder, and other characters from the movie, and a coral reef sculpture were made during the campers’ art time. Campers also made art by blowing colored bubbles on paper and created an ocean in a jar to take home. They had loads of fun playing games like Ships and Sailors and Dodgeball. The highlight of the week was Thursday’s field trip, where campers turned into mermaids and sharks, to take on Summer Waves! The kids enjoyed the wave pool, the lazy river, and most of all, the water slides. The kids voted Jayla Shrouder as camper of the week for week 3: The Little Mermaid.

Our last week of Camp Cool was a blast. Diary of a Wimpy Kid is the story of an unpopular middle school student and his quest to survive the year through the eyes of his journal. He deals with family, friends, and bullies. Campers created their own art journals and tried different art techniques in it. They decorated bags and made coasters with cartoon drawings on them. They also made dreamcatchers and stress balls. The kids got really competitive playing games like checkers and memory games. We talked about the effects of bullying and what to do if you see someone being bullied. We also talked about ways to be a better friend and how to be kind. Our field trip on Thursday was to Valdosta to see the musical Newsies. It’s a Disney musical set around 1900 about kids on a newspaper strike. Campers said that it taught them to reach for their goals and to fight for what is right. They thought it was amazing. Campers voted Hoyt English as our camper of the week for week 4: Diary of a Wimpy Kid.

If your child missed out on all the Summer Fun with Douglas Coffee County Parks and Recreation no fear our summer Registration is always the first Tuesday in May for 4-6 p.m. at our main office 200-C South Madison. If you would like to know more about our summer camp or any of our Adult and Sr. programs please Call: 912-383-733, email This email address is being protected from spambots. You need JavaScript enabled to view it.  or join us on Facebook with Douglas Coffee County Parks and Recreation page.  All upcoming events will be posted on our Facebook page. Hope to see you next year!