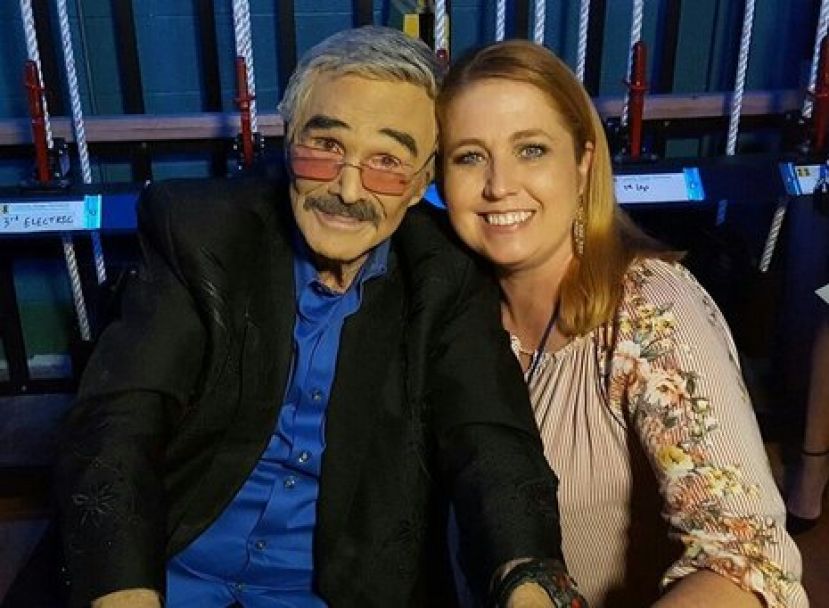 Photo courtesy of Windi Raper Windi Raper of Douglas (right) was one of several locals who visited with Burt Reynolds at the RKDS Film Festival in Valdosta in July. Thursday, Sept. 6, Reynolds died at age 82.

Earlier today, legendary actor Burt Reynolds died at age 82. In July, several Coffee Countians had the opportunity to spend a few minutes with Reynolds at the RKDS Film Festival in Valdosta, where Reynolds’ films were prominently featured.

The festival took place on July 12-14. On July 12, Reynolds, a Golden Globe winner and Academy Award nominee, was given a key to the city of Valdosta by Mayor John Gayle and a commendation from the Georgia General Assembly by Rep. John Lahood. Several of the over 200 films in which Reynolds acted were shot in Georgia. Three of Reynolds’ movies – “Smokey and the Bandit,” “Gator,” and “The Last Movie Star” – were featured during the festival. All three were filmed in Georgia; “Gator” was shot just up the road in Lakeland at Banks Lake.

A group of fans from Coffee County attended the festival and several took photos with Reynolds. At the festival, Reynolds looked frail and he had trouble walking. His mind, however, was sharp. He answered questions from audience members quickly and clearly. Reynolds stated that he planned to keep working in spite of his deteriorating physical condition. He was supposed to begin shooting his next movie, Quentin Tarantino’s “Once Upon a Time in Hollywood,” a film that takes place during Charles Manson’s summer of Helter Skelter, later this month.

A star high school football player in Riviera Beach, Fla., Reynolds accepted a football scholarship from Florida State University. However, a series of injuries – one suffered on the field and others in a car accident – cut his football career short. He left FSU and enrolled in junior college classes nearer to his home. It was there that he first became involved in acting.

Reynolds has been quoted as saying that every day when on set, he would walk up to camera, lean over and quietly whisper, “I need you to like me today. Please like me today.” While Reynolds may have never earned the honors of more acclaimed dramatic actors, there is no disputing that the camera always liked him. He had a rare combination of wit, charm, good looks, and tremendous acting ability that made him one of Hollywood’s most bankable stars. While he may not have had the accolades of a DeNiro, Pacino, Nicholson, or Redford, he was certainly no less of an actor. Burt Reynolds was an everyman’s leading man, one whose presence transcended the screen and brought viewers into the movie with him. For example, in “Smokey and the Bandit,” when Reynolds’s Bandit eluded a dim-witted police officer early in the film and he slowly turned and grinned into the camera, breaking the fourth wall, do you not feel as though you are in the Trans Am with him? Not everyone can pull that off. Burt Reynolds, however, wasn’t everyone.

I remember standing in the audience at the RKDS festival. I wanted to ask Reynolds a question. I had two in mind. One was related to the statement made above, about the camera liking him. The other was his connection to the Trans Am. I wanted his thoughts on being forever linked to that car after “Smokey and the Bandit” and what he thought about it. Unfortunately, I didn’t take the opportunity. I knew I probably wouldn’t have another chance to talk to him. But I certainly didn’t think that just a few weeks later, Reynolds would no longer be with us.

Burt Reynolds was a tremendous actor and a gentleman. None of us can outrun time but I thought he had a few more miles left in him. We have lost an incredible talent, a face of a generation, and one of the finest actors to ever work in Hollywood. I am deeply saddened by his passing.