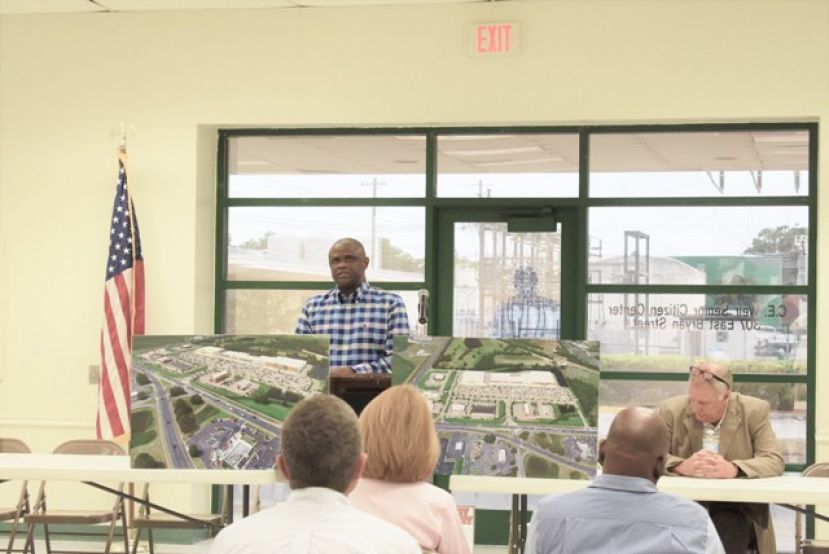 The City of Douglas mayor and commissioners hosted the first town hall meeting about the tax allocation district (TAD) referendum on Thursday, June 6, 2019, at the CE Weir Center.  City leaders and representatives from Perlis-Nease and the Jones Company were on-hand to listen, answer questions, and discuss any concerns from the public may have about the planned redevelopment at the old high school grounds.

“Everyone, city and county residents, were invited to join the conversation about the vote on TAD,” says Mayor Tony Paulk.  “I wanted to have this meeting so that before Douglas citizens vote on the referendum in November, they will be well educated about their decision to vote on the TAD referendum.”

Brian Bennett and Skylar Long from Perlis Nease gave a brief presentation about the redevelopment and how the project for Douglas Square will allow the project to invest in local dollars and improve Douglas’s quality of life.  It is estimated that approximately 275 jobs will be created from this investment. One of the big retailers potentially coming to Douglas, believes in developing leadership skill amongst employees to grow new leaders for Douglas and Coffee County.

Also present was Patrick Jones with the Jones Company.  According to Perlis-Nease and Jones Company representatives, “We are currently working on Phase 2 to attract big box retailers and for major retail to commit to come to rural Douglas, it must be a bankable and investable deal, which is why the establishment of the tax allocation district is important.”

After the presentations from Perlis-Nease and the Jones Company, Douglas Mayor Paulk opened the forum to questions, answers, and discussion with attendees.  Prior to the election in November, an additional Town Hall meeting is planned with city leaders, the Coffee County Commission, and Coffee County Board of Education.

Approval for the Act to authorize the local government to exercise redevelopment powers under the Redevelopment Powers Law, or to establish a TAD, will be on the ballot for city residents to vote upon during the General Election on Tuesday, Nov. 5, 2019.

More in this category: « Spraying for peanuts, pecans Baldwin's Ballers camp scheduled at SGSC this summer »
Login to post comments