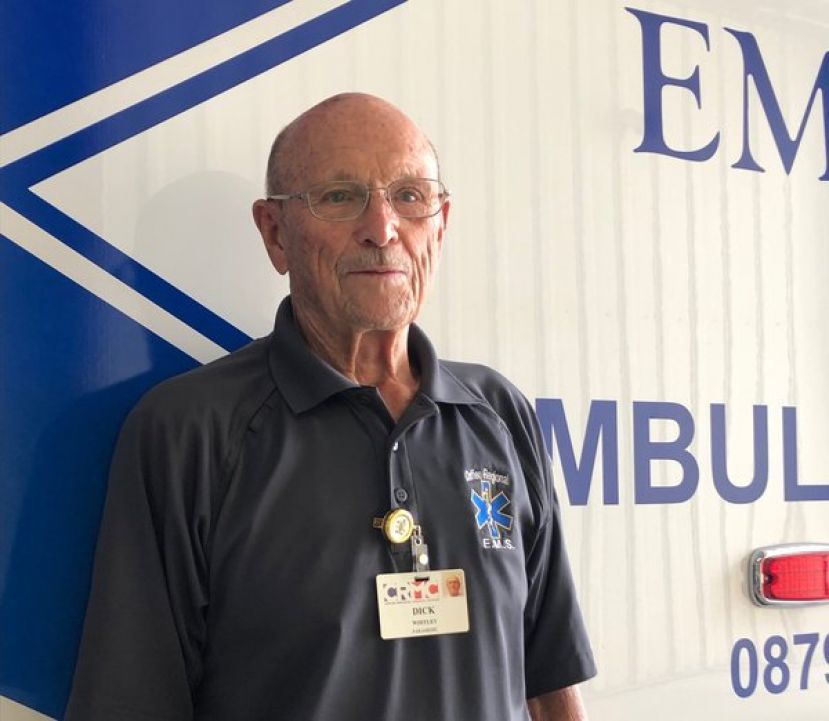 As the CRMC ambulance pulled back into Coffee County in the early morning hours of June 18, 2019, after making a transport to Savannah, it would be Dick Whitley’s last ride as an EMT.  At the young age of 86, Whitley has decided to retire, once again, from his service with Coffee Regional Medical Center EMS.

Born September 30, 1932 in Douglas to the late J.W. (Pete) Whitley and Helen Whitley, Mr. Whitley attended school in Douglas-Coffee County and graduated from Douglas High School in 1951. After graduation, Mr. Whitley joined the U.S. Air Force and, in 1951, completed his basic training and continued to serve four years. After his discharge, he ended up in South Dakota working on a rural farm until 1957, when he realized it wasn’t the life he envisioned. He rejoined the United States Air Force in 1957 and served until 1971. Over the next 16 years, he served in the Korean War and Vietnam War where he served with the EOD as demolition specialist. During this time, Mr. Whitley married the love of his life, Cecilia Meeks, on Feb 16, 1958.

Mr. and Mrs. Whitley would later have two daughters, Dana and Donna.  Mr. Whitley served a total of 20 years in the Air Force and honorably retired in 1971. After retiring, he returned home to Coffee County.  Once home, he began attending South Georgia College and was hired by Merch Refrigerator Company where he worked until 1977.  It was in 1977 that he began working at Coffee General Hospital, which would later be renamed Coffee Regional Medical Center. Mr. Whitley began his career at Coffee General working in the Human Resources department as personnel director. He served in that capacity for several years before leaving to work for Chaney Bush Irrigation Company for a short period. He returned to Coffee General where he worked with the auxiliary responding to emergency calls at night while going to EMT school during the day.

Mr. Whitley would become a full time EMT in 1988 at Coffee Regional Hospital. Later, in 1990 he completed the paramedic program in Valdosta under Barbara Tucker. Shortly thereafter, Mr. Whitley was promoted to shift captain and he would work in that capacity until his retirement from full-time work in June of 2005. Mr. Whitley couldn’t stand the thought of not helping people in need; therefore he returned to work as a part-time paramedic. Mr. Whitley suffered great loss in the years that followed, losing his beloved daughter Dana in January of 2013, the love of his life, wife Cecilia in July of 2013, and his son-in-law in March of 2014.

Mr. Whitley stayed abreast and up-to-date with the most current skills and updates in medicine, from licensing to attending classes for continuing education to learning the newest life-saving equipment and techniques in emergency medicine. During his career, he was named EMT/Paramedic of the Year on several occasions, the most recent being 2017.  Mr. Whitley is very involved in the community as well as his church, traveling abroad on three mission trips to El Salvador since 2014.

Robert Shadd, Director of Georgia’s EMS Region 9, verified that Mr. Whitley is the oldest licensed and working paramedic in Georgia.

Coffee Regional Medical Center would like to offer a very special thanks to Mr. Whitley for his 45 years of service to this community and his 20 years of service to this great nation. CRMC is a better organization because of the hard work and dedication you displayed over the years. When asked what he planned to do in his retirement, Mr. Whitley simply said that he planned to spend time at his river house. Mr. Whitley, may the only sirens you hear be those from the bullfrogs and crickets along the river bank.