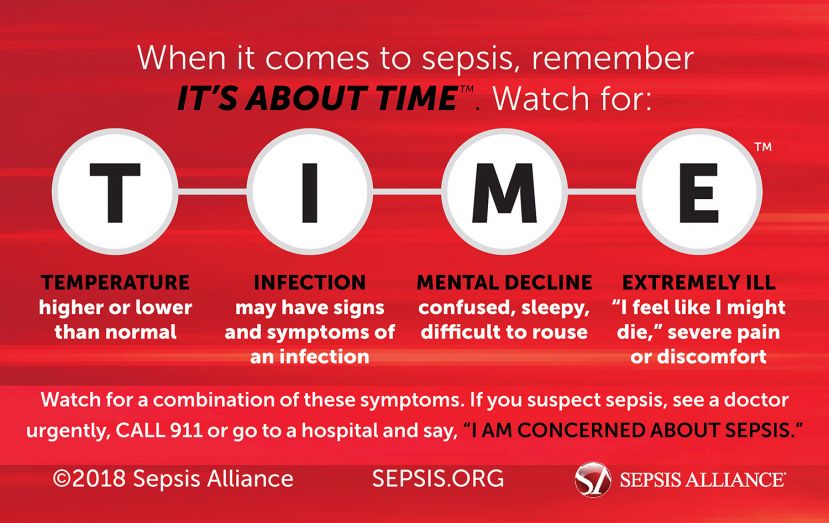 The following information is provided by www.sepsis.org

What is Sepsis? Sepsis is the body’s overwhelming and life-threatening response to infection that can lead to tissue damage, organ failure, and death. In other words, it’s your body’s overactive and toxic response to an infection.

Your immune system usually works to fight any germs (bacteria, viruses, fungi, or parasites) to prevent infection. If an infection does occur, your immune system will try to fight it, although you may need help with medication such as antibiotics, antivirals, antifungals, and antiparasitics. However, for reasons researchers don’t understand, sometimes the immune system stops fighting the “invaders,” and begins to turn on itself. This is the start of sepsis.

Patients are diagnosed with sepsis when they develop a set of signs and symptoms related to sepsis. Sepsis is not diagnosed based on an infection itself. If you have more than one of the symptoms of sepsis, especially if there are signs of an infection or you fall into one of the higher risk groups, your doctor will likely suspect sepsis.

Sepsis progresses to severe sepsis when in addition to signs of sepsis, there are signs of organ dysfunction, such as difficulty breathing (problems with the lungs), low or no urine output (kidneys), abnormal liver tests (liver), and changes in mental status (brain). Nearly all patients with severe sepsis require treatment in an intensive care unit (ICU).

Septic shock is the most severe level and is diagnosed when your blood pressure drops to dangerous levels.

Studies investigating survival have reported slightly different numbers, but it appears that on average, approximately 30% of patients diagnosed with severe sepsis do not survive. Up to 50% of survivors suffer from post-sepsis syndrome. Until a cure for sepsis is found, early detection and treatment is essential for survival and limiting disability for survivors.

Your body’s temperature should stay fairly constant, around 98.6 degrees Fahrenheit (37 degrees Celsius), moving up or down a bit depending on your activity, the environment, and time of day. A temperature of 100 degrees Fahrenheit (37.7 degrees Celsius) is considered to be hyperthermia, a fever. When you have an infection, your body’s temperature usually rises as it tries to fight off the bug causing the infection. Interestingly, some people see their body temperature go down (hypothermia) instead of up. This is why any change, high or low, can be a sign of sepsis.

I – Infection – may have signs and symptoms of an infection.

Sometimes however, you may have an infection and not know it, and not have any symptoms. Keep this in mind especially if you have recently had surgery or an invasive medical procedure, a break in your skin, or you have been exposed to someone who is ill.

Sepsis can affect your mental status. Some people, especially the elderly, may not show typical signs of infection. Instead, they may show a sudden change in mental status, becoming confused, or a worsening of dementia and confusion. Sleepiness, often severe, is also a common complaint.

Children developing sepsis may exhibit different symptoms. Time is very critical so if you see one or more of the symptoms below, your child may be very ill. See a doctor immediately, come to the ER, or call 9-1-1 and say “I’m concerned about sepsis” to ensure the proper medical care is received. Below may be symptoms of sepsis in children:

For children under 5, the following may be signs of sepsis:

Unlike diseases or conditions like diabetes or kidney stones, there is no one test that can tell if you have sepsis. Diagnosis is made after your doctor evaluates your symptoms, your history, and other tests that may indicate you have an infection. This can then lead your doctor to suspect you have sepsis.

Some of the tests that may be done to help determine if you do have sepsis include blood tests, urine tests, and tests for specific infections including pneumonia, meningitis, strep throat, influenza, and skin infections.

What is the treatment for Sepsis? Sepsis is a medical emergency, and should be treated as such. In other words, sepsis should be treated as quickly and efficiently as possible as soon as it has been identified. This means rapid administration of antibiotics and IV fluids. The severity of the sepsis and health of the patient will determine the route of treatment. A 2006 study showed that the risk of death from sepsis increases by an average of up to 7.6% with every hour that passes before treatment begins, therefore time is critical.

What are the risk factors for sepsis? The obvious risk factor is an infection. Any infection, from the tiniest source (a bug bite, a hangnail, etc.) to the more severe (pneumonia, meningitis, and more), can trigger sepsis, which can lead to severe sepsis and septic shock. The infection can be bacterial, viral, fungal, or parasitic. But some people do have a higher risk of developing infections and sepsis than others.

Those at the highest risk of developing sepsis include the very young and the very old (infants and seniors), as well as people with chronic or serious illnesses, such as diabetes and cancer, and those who have an impaired immune system.

Sepsis can be caused by any type of infection: bacterial, viral, fungal, or even parasitic. Sepsis can’t always be prevented, but many infections can be avoided with good and consistent hygiene. Others can be prevented through the use of vaccinations. Knowing the sepsis risk factors, you help reduce your chances of developing sepsis. You can also say the words “I’m concerned about sepsis because I have….” to healthcare professionals. Saying these words can make the difference between quick identification and waiting.

Your friends at Coffee Regional Medical Center remind you, if you suspect you or a loved one has developed sepsis, please seek immediate medical attention.