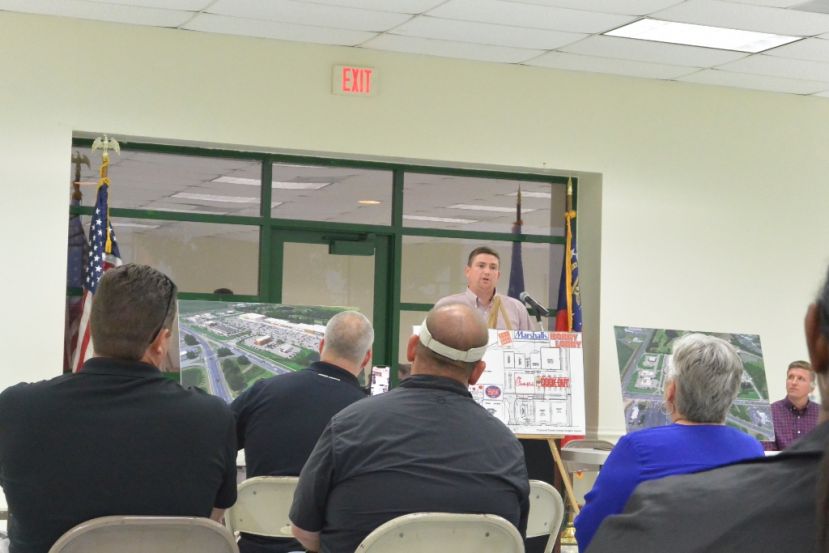 T.A.D. meeting generates discussion with vote less than a month away

At the community meeting on Monday, October 7, 2019, developers held an open discussion to answer questions regarding the redevelopment of the old high school grounds.  The future of Douglas Square, a 120,000 square foot shopping destination that will include Hobby Lobby, Marshalls, Chik-Fil-A, Jersey Mike Subs, Starbucks, Rack Room Shoes, and Cook Out, will be in the hands of Douglas voters beginning with advance voting on Monday, October 14, 2019.

“With Douglas being a smaller market, allowing the City of Douglas to establish its redevelopment powers will help create a T.A.D., which will help offset the cost to bring retail tenants to Douglas,” says Skylar Long with the Perlis Nease Company.  “Using T.A.D. legislation, the City of Douglas, Coffee County and the Coffee County Board of Education can partner with this project to offset the deficiency. This partnership only requires that municipalities agree to share in the tax revenue generated by the new development in order to fund bond issuances. “

If a T.A.D. is established, there is no liability to any tax payer or government entity.  All liability rests on the developer and created T.A.D. District. Property taxes will not go up due to creating the T.A.D.

“Now is our time to make this happen, we need the citizens of Douglas to get behind this vote to make the redevelopment happen,” says Mayor Tony Paulk.   “If citizens vote to grant the City of Douglas Redevelopment Powers, construction on this project could begin as soon as 2020! This redevelopment is our chance to let others know Douglas-Coffee County can sustain national retailers and top restaurants.”

The second phase of this project will be based on the success of the anchor stores and may possibly bring a national grocer, a top restaurant, and more retail stores.  The citizens of Douglas will vote on Election Day, November 5, 2019, whether or not to allow the City of Douglas to exercise its redevelopment powers to establish the tax allocation district.