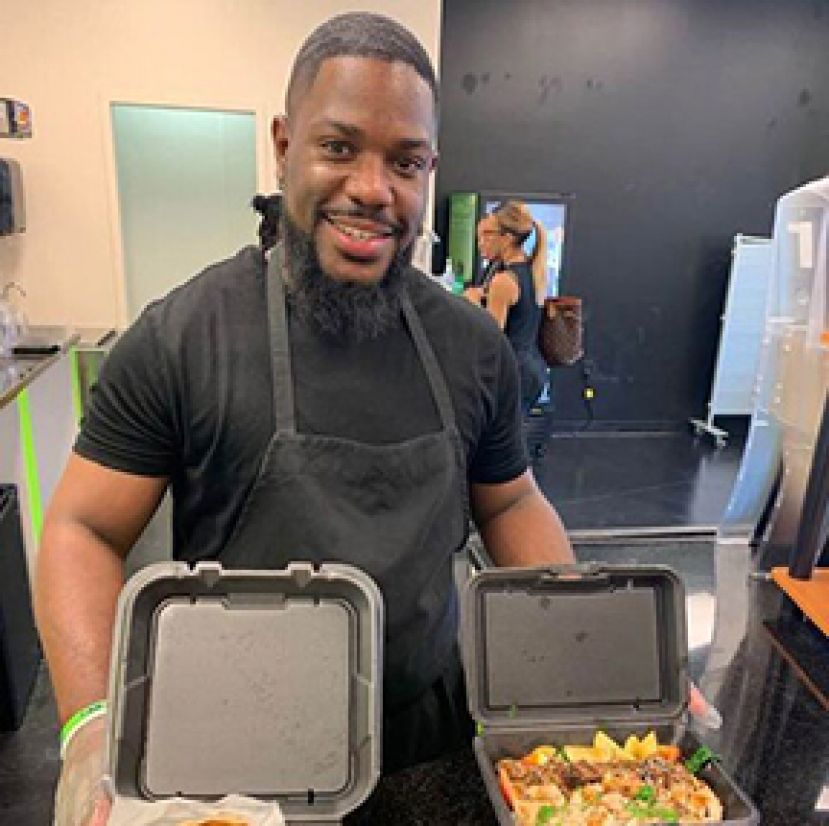 Xavier Thomas, a graduate of Wiregrass Tech’s Culinary Arts program, is the owner of The Fusion Chefs Eatery located in Fayetteville outside of Atlanta.  After graduating from Wiregrass in July 2017, Thomas starting a private catering business in Valdosta while working full-time with a local corporation.  His passion for cooking began as a child in the kitchen with his grandmother; that passion and leap of faith led him to move his family from Valdosta to Atlanta to pursue his passion.  “My wife and I had been talking about moving back to Atlanta, a larger city with more opportunities and made that jump in May 2018,” shared Thomas.

After moving to Atlanta, he was a chef with Fox Films and several other production companies.  “I helped cater for several television series including The Residency, Jumanji II, and Doom Patrol,” shared Thomas.  During that time in Atlanta he met several celebrities.  With the experience he was gaining and new contacts, Thomas decided to take one more leap of faith. In April of 2019, he opened The Fusions Chefs Eatery.  One of his biggest supporters and frequent customers is Lee Haney, former IFBB professional bodybuilder and eight-time Mr. Olympia. The restaurant has also delivered to famous hip-hop artist Rick Ross, former NBA basketball players, film makers, and more.  Starting this month, the restaurant has secured a catering contact with a famous and well-known executive producer in Atlanta.

The restaurant is a unique eatery that specializes in preparing different cuisines from all over the world.  They serve a variety of menu options such as gourmet whole wings, Greek Gyros, Hibachi Style Bowls, Keto Friendly, Vegan Bowls and more.   When asked what advice would he give someone who also has a passion for cooking and considering a career in Culinary Arts he offered, “Connect with a mentor. Someone who has experience in the industry with a passion for cooking and who also loves seeing people’s faces light-up when they cook for them.” Thomas offered this as his keys for success: he puts God first and always seeks Him for guidance and direction.  Thomas feels having a strong support system that encouraged and cheered him on every step of the journey as helped him.  And last, he surrounds himself with people who are smarter than him; this keeps him humble and causes him to always strive to be greater.  Thomas also shared, “Just do it.  If you continue to do the same things, you’ll continue to get the same results.  Things won’t always fall in your lap. You have to make some mistakes and stumble, but you learn from those mistakes and become a better you.”

Thomas credits Wiregrass Tech’s Culinary Arts Instructor Mitchell Pitts for having a huge impact on his culinary arts career and attributes his teaching and mentorship to the reason he was able to finish the program.  “Chef Pitts helped me to put things into perspective, he helped me think beyond the classroom and how to approach the culinary arts industry after graduation,” shared Thomas.  “I feel because of the culinary arts instructors who took a personal interest in the success of their students is the reason why I’ve been able to accomplish what I’ve done.”

Wiregrass offers Culinary Arts as an associates of science degree and diploma.  There are also several certificate programs offered: Food Production Worker, Catering Specialist, and Prep Cook.  The program has a job placement rate of 100 percent and accepts new students any semester.  Wiregrass will be accepting new students for Summer Semester during Free Application Week, March 23 – March 27.  The Summer Semester classes will begin May 28.  For more information about this program, visit the college’s website at wiregrass.edu.