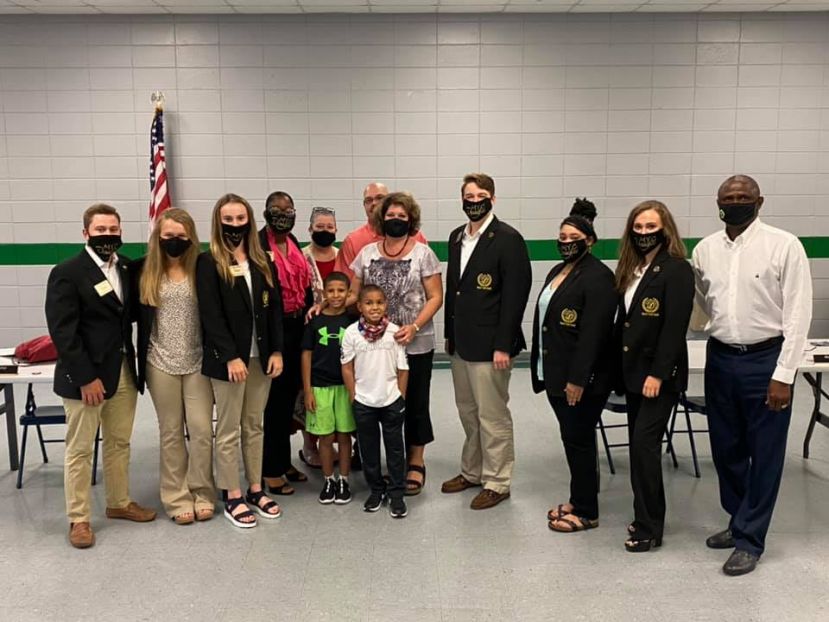 The first order of business on the agenda was to hear Parks and Recreation updates from Parks and Recreation Athletic Coordinator, Landy Gomez.  Landy spoke to the group about the upcoming building projects, the Miracle Field, and new swimming pool.  Gomez also talked about pre-season preparations for ensuring a safe Basketball season for youth participants.

To show their support for Childhood Cancer Awareness Month, the monthly guest speaker was Mrs. Tamara Morgan.  Mrs. Morgan spoke about her son, Ashton, who is fighting cancer, and on behalf of the Childhood Cancer Awareness Group of Coffee County.  Morgan detailed their difficult trials while dealing with Ashton’s cancer diagnosis and how much CCAGCC helps families and children who are dealing with cancer.  Ashton wishes to continue his fight against cancer by becoming a superhero and police officer to help others in the community.

For the month of September, the Youth Council, chose to spotlight Junior Commissioner, Will Waldron.  Will is the son of Billy and Renee Waldron. He is in the 12th grade at Citizens Christian Academy. He plays basketball and baseball. He plans to attend ABAC and obtain a degree in Ag Business. After attending ABAC, he plans to join his family’s business.

The outstanding community youth for September is Ace Harris.  Ace is the son of Jason and Brandi Harris. He has two older sisters Adelyn and Abrah.  Ace is eight years old, and started playing golf around two years old. Since beginning tournament play at age four, Ace has won and placed in several golf tournaments such as the Florida US Kids Golf tour; US Kids Golf tournaments; the Georgia State Championship, the Holiday Classic at the PGA National Golf Club, the Jekyll Island Cup, the Florida State Championship.  Ace qualified and competed in the US Kids Golf World Championship in Pinehurst, North Carolina, which is an invitation only and premier golf event for young aspiring golfers.  Ace placed 10th out of 107 kids, and placed 7th in the world out of the top 95 eight-year olds. With no golf coach and only a handful of golf lessons, Ace has had little formal training in the game of golf – it is his passion.  Ace is in the 3rd grade at Citizens Christian Academy and his name can always be found on Superior Honor Roll. He loves his Patriot family. Ace has made Jesus, Lord of his life, and loves being at his church, The Sanctuary. You can follow Ace’s golf journey on Instagram @aceharrisgolf.

The Douglas Mayor’s Youth Council fosters leadership skills and allows students to be an advisory council to the Mayor and Commission.  The DMYC wants to hear from citizens about youth in our community that are doing exceptional things with their lives.  To submit a youth or youth group to be recognized, please contact Dinitra Williams, Douglas Mayor’s Youth Council Coordinator, at This email address is being protected from spambots. You need JavaScript enabled to view it. or call the City Clerk’s office at (912) 389-3405.