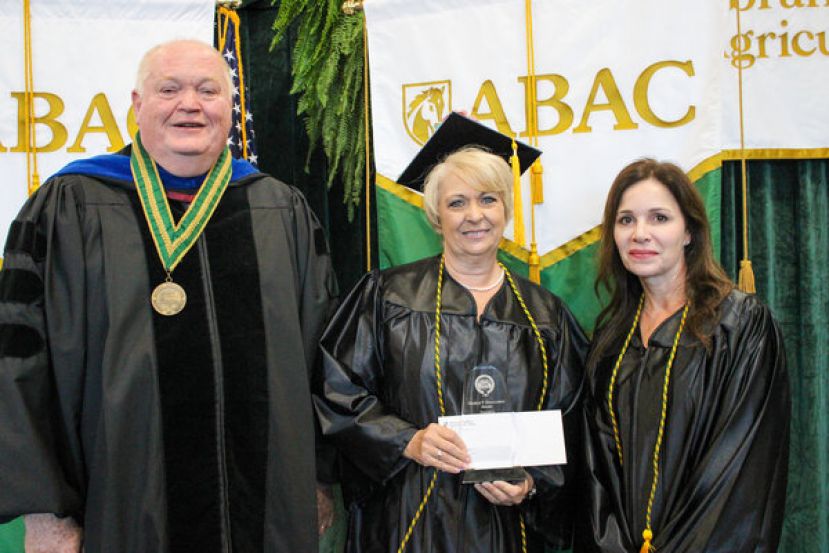 The recipient receives a plaque and a check for $500 from the ABAC Alumni Association, which sponsors the award and conducts the interviews which lead to the selection of the recipient.

George P. Donaldson was president of ABAC from 1947 until 1961.  He is perhaps the most beloved ABAC president of all time because of his love for people and his love for ABAC.  The award recognizes scholarship, leadership, and citizenship.

Married with three children, Butler compiled a grade point average of 3.53 on a 4.00 scale.  She was included on the Distinguished Achievement List every semester she attended ABAC.

Butler has also continued to work as an LPN while attending classes.  She works as a nurse in the Emergency Room and was right there on the front lines when the pandemic was raging.

A volunteer for Friends of the Park, which helps to support the beautification of all of Georgia's state parks, Butler also volunteered in the Run for the Nurses at ABAC.

ABAC President David Bridges said Butler's story is one of perseverance and dedication.

"She was accepted to attend ABAC in 1987," Bridges said.  "It didn't work out financially at the time, so she received her LPN, went to work, got married, raised a family, and sent two of her children to the University of Georgia before finally completing her core curriculum.

"Then she applied to the ABAC Nursing Program, got accepted, and drove 75 minutes one way to take the classes.  Now that's perseverance.  That's dedication."

Butler said, "ABAC has allowed me to complete a goal I have been seeking for 34 years.  It was very hard to be 51 years old and walk into a room filled with students, and in most cases, staff and faculty, younger than me.

"However, not one person ever treated me differently than any other person.  I want to be an example that you are never too old to achieve your goal."

Butler now plans to enter the BSN Program at ABAC.  One instructor said it best, "she is the kind of student that hospitals want to hire."

A total of 228 graduates participated in the two commencement ceremonies on Thursday.  Spring semester classes begin at ABAC on Jan. 12, 2022.