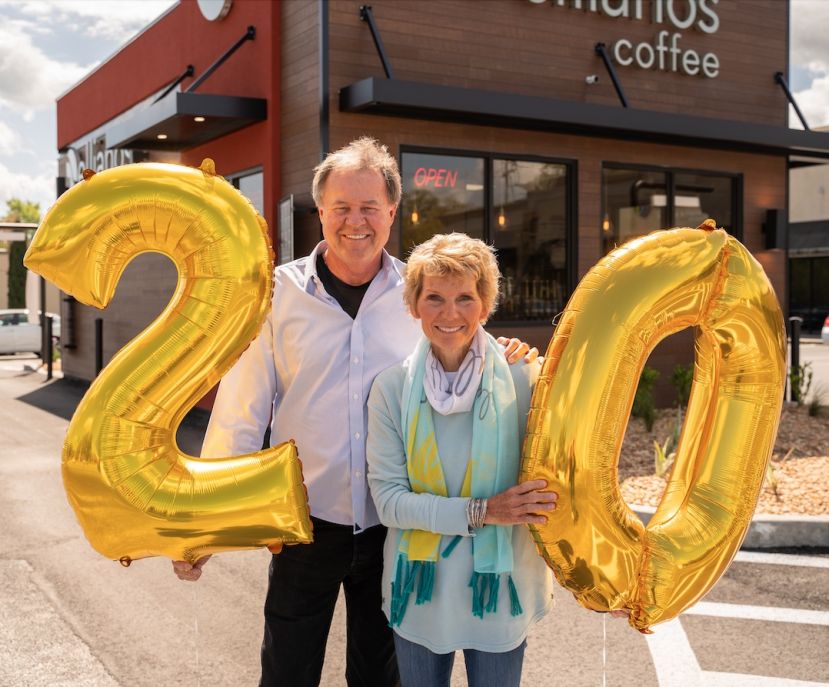 Ellianos Coffee, the dominant specialty-coffee brand in the southeast United States, is celebrating twenty years of serving their incredible customers Italian Quality at America's Pace! To commemorate the special anniversary, Ellianos will be hosting giveaways throughout the month of April and releasing a special anniversary drink.

The Ellianos Coffee story first began 20 years ago when coffee aficionados Scott and Pam Stewart noticed the exploding drive-thru specialty-coffee industry during a trip to the Pacific Northwest. They returned home with the idea of bringing the Northwest coffeehouse tradition to the Southeast and started working to make their vision a reality. After months of planning, hard work, and dedication, Scott and Pam's dream came to fruition - their dream of opening a drive-thru coffeehouse in their town was now standing in front of them. The first Ellianos Coffee store opened on April 5, 2002, in Lake City, Florida, and was well-received. The community's residents fell in love with the coffee, excellent customer service, and the convenient concept. Ellianos Coffee began franchising in 2003, and these simple principles - outstanding quality and exceptional, timely customer service - are still found at the very core of the family-owned business.

Scott reflects with pride over the past 20 years, stating, "Ellianos Coffee didn't happen overnight. It has resulted from an exciting dream, a lot of hard work, determination, and most importantly, a family of great people. Ellianos has always been much more than the stores or coffee - it's always been about the people that make it all possible. From the hardworking baristas in our stores, amazing franchisees, and loyal customers, every face makes Ellianos what it is today. We couldn't celebrate twenty years without saying 'Thank you!'"

There's no better way to celebrate 20 years than with cake! To commemorate such a momentous anniversary, Ellianos is releasing a special drink, The Cake Shake, available at Ellianos Coffee locations starting April 5. The shake boasts notes of sweet vanilla swirled with cupcake flavoring and infused with rainbow sprinkles, available with or without coffee. Make plans to stop by your nearest Ellianos location to try The Cake Shake, and follow Ellianos on Facebook and Instagram to be a part of the giveaways they will be hosting throughout the month.