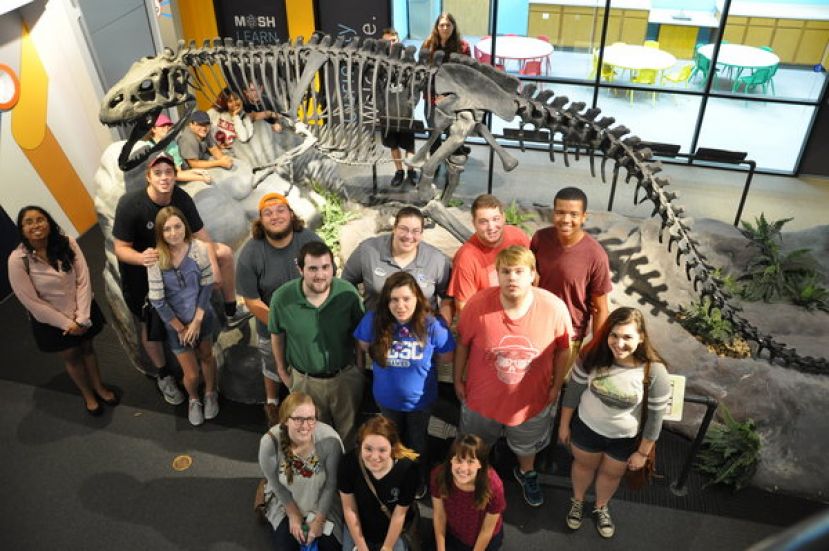 On Saturday, September 23, the Science, Technology, Engineering and Math (STEM) Center of the Waycross campus of South Georgia State College (SGSC) took a large group of students to participate in Museum Day Live! at Jacksonville’s Museum of Science and History (MOSH).

Museum Day Live!, also called National Museum Day, is an annual event hosted by Smithsonian Magazine. On this day, hundreds of museums across the country open their doors to the public free-of-charge. Smithsonian describes its event as a “celebration of boundless curiosity,” and SGSC’s students certainly found much to be curious about as they toured the MOSH.

Students and staff alike enjoyed the many fascinating exhibits, which included a dinosaur, a history of northeastern Florida, an interactive “Power the City” exhibit, and “Ancient Rome,” the museum’s newest installation. Each SGSC participant cited something different as a trip highlight.

Student Sara Williams described a demonstration in which a balloon filled with hydrogen was used to move two 100-pound doors as her stand-out moment. “It was lit!” she said laughing, which was an appropriate response given the balloon was set on fire.

SGSC Academic Advisor Priscilla Price spoke highly of the Ancient Rome exhibit saying, “My favorite part was when we took pictures with the Romans.” She went on to explain that these were interactive statues of famous Ancient Romans such as Caesar, Nero, and Persius. “They had them up on pedestals,” she continued, “and you could take selfies with them. They also had a station where you could dress up as a centurion (Roman soldier) and have your picture taken; several of our students got pictures of themselves dressed up as with the sword, helmet, shield, and everything.”

Other points of interest for many involved include a catapult-building workshop in the Rome exhibit and brain teasers on the top floor of the museum.

The MOSH is a private, non-profit institution that specializes in topics surrounding science and the state history of Florida. Originally housed in a Victorian mansion, construction on the museum’s current location was completed in 1994, and it now features multiple floors of permanent exhibits, as well as a main exhibit that changes quarterly. Core values of the museum are listed as engagement, pride, excellence, collaboration, innovation and trust.

SGSC’s STEM Center’s next planned field trip is to Optima Chemical in Douglas, Georgia. For more information on the STEM Center and other future events, contact Sarah E. Braswell at (912) 449-7501, or This email address is being protected from spambots. You need JavaScript enabled to view it..