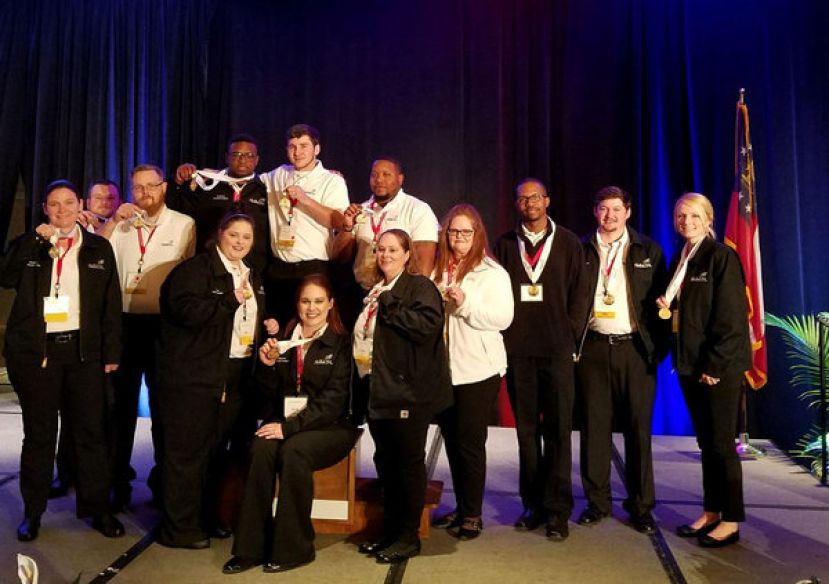 Wiregrass Georgia Technical College had an excellent showing at the SkillsUSA State Championship in Atlanta this past weekend. The college brought back 15 gold, 11 silver and seven bronze medals in the skills competition among other colleges. The college medaled in 21 out of 31 contests for those with Wiregrass competitors. Among the gold medal count is the Chapter of Distinction Gold level award. Wiregrass was one of two colleges in the state recognized at this level which also earned them the privilege of being submitted for consideration of the National Chapter of Excellence award to be announced in June at the SkillsUSA National Competitions in Kentucky. Wiregrass’s SkillsUSA Chapter was also recognized for Largest Member Growth and Largest Chapter.

Kelley Wetherington serves as the college’s Campus Life Coordinator and SkillsUSA Advisor, and has worked hard this year in recruiting students for the organization and helping coordinate the service projects that led them to win the gold level Chapter of Distinction award. “I am beyond proud of the students and advisors for their dedication, sacrifice, and hard work that they put in this year. Not only did the students put in extra time perfecting their skills for competition, but they also put in extra time helping with several community projects in addition to juggling their college and home life.”

Wiregrass Tech had 14 gold medalist who will now compete at the National SkillsUSA competition in Kentucky this June after winning top place at the state-wide competition. SkillsUSA is a partnership of students, teachers and industry representatives working together to ensure America has a skilled work force. It is a national nonprofit organization serving teachers, high school and college students who are preparing for careers in trade, technical and skills service occupations, including health occupations. The SkillsUSA program hosts local, state, and national competition for students to showcase their skills learned through hands-on training in the classroom. Wiregrass also had 11 students who earned silver medals and seven with bronze medals.

This was the first year Wiregrass’ SkillsUSA Chapter was recognized as a Chapter of Distinction. There are several levels of Distinction a chapter can earn. Wiregrass’ Chapter earned recognition for personal skills where the students worked on a project they called, “Colors for a Cause”. The students collected coloring supplies and then donated and delivered what was collected for seven area hospitals. The Workplace Skills level was met with the Tiaras and Ties Project where they students and advisors collected clothing items, provided cosmetology and esthetic services, and helped sponsor two Night to Shine proms through the Tim Tebow Foundation. The third level the Chapter completed was technical skills. The Chapter worked with a community leadership group to design and implement the City of Adel Daylily Display, a metal artwork project. Each project received points giving the Chapter enough points to earn the Gold Chapter of Distinction award “Wiregrass is extremely proud of all our students who participated in the SkillsUSA competition. Our instructors did an excellent job preparing students for state competition,” stated Wiregrass President, Dr. Tina K. Anderson. “We are especially proud to have fifteen gold medals including Gold for Chapter Distinction. Wiregrass will be well represented at the National SkillsUSA Championships in June. We congratulate these students, faculty, and advisors.”