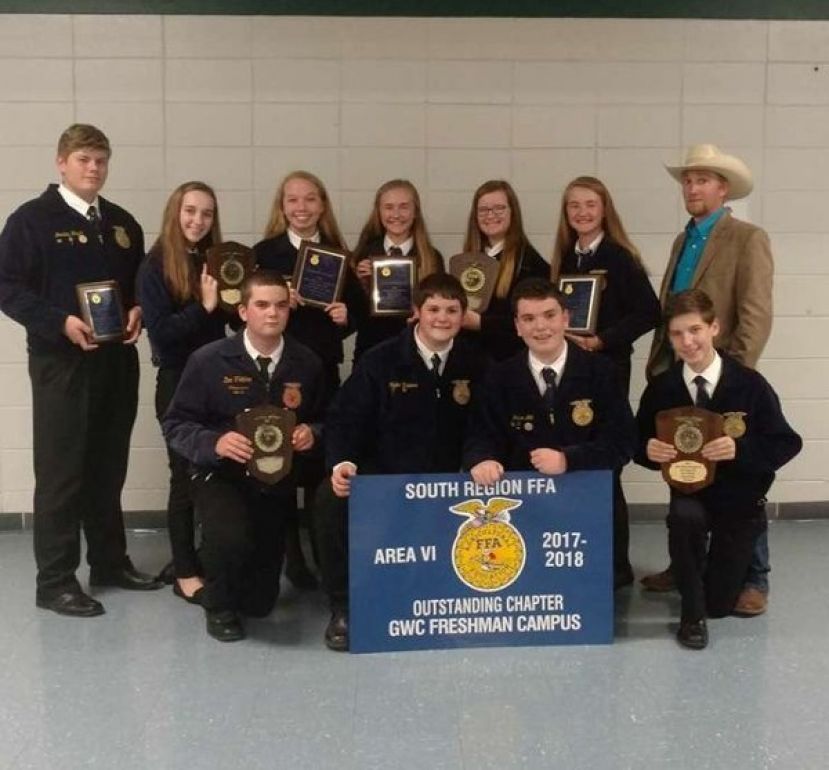 On Thursday, May 10, 2018, Future Farmers of America (FFA) members from around the area traveled to Waycross, Georgia where the annual Area 6 FFA banquet was held. At the banquet, students were fed and honored for their achievements throughout the year. The George Washington Carver Freshman Campus (GWCFC) chapter received several awards throughout the night.

The chapter earned a total of eight plaques throughout the night. The chapter treasurer, Jordan Wright, received an award for his treasure book, which is a detailed record of the chapter's receipts and disbursements. The Horse Judging team was also awarded a plaque for placing second in the Area Horse Judging Career Development Event (CDE), as well as the state contest. This contest requires students to evaluate a variety of horse breeds, place them into the order they believe is best, and give oral reasons to defend their reasoning as to their placings. Alex Vaughn also received a plaque for being the highest individual at the area level. The Junior Agricultural Mechanics team was awarded a plaque for placing second at the area level. This contest requires students to develop their technical skills and their ability to solve problems as a team. The meat judging team was given a plaque for placing first at the area banquet. Also, Jaksen Lott was given a plaque for being the highest individual at the area level of competition. This CDE involves members evaluating various cuts of meat and identifying the type of meat. The chapter has also presented a plaque for their performance at the area Conduct of Chapter Meetings contest, where they placed second. This contest requires students to demonstrate their knowledge of parliamentary procedures. Abbi Vaughn also received an award for her accomplishments in the Floral Design contest, which requires participants to create floral arrangements within a set time period. Vaughn placed first in both the area and the state events.

The GWCFC chapter received many other honors aside from the plaques. The chapter's vice president Jaksen Lott ran for a position on the Area Officer Team. Candidates are required to deliver a one-minute speech that convinces the voting members to vote for them. Lott's speech was very well written, and his slogan was "Take a shot and vote for Lott." He won a position and will serve as the 2018-2019 Area 6 Historian.

The chapter was also rewarded with the title of "Most Outstanding High School Chapter with a single ad." The winner of this title is chosen based on the amount of CDE's and events the chapter attends. The members who attended were very excited and surprised to get this award but they worked very hard to get it. Alex Vaughn stated, "I'm super proud of us. We worked very hard this year and it paid off. I couldn't have asked for a better group to work with."

The members of the GWCFC FFA chapter are honored to be given these awards and would like to thank everyone who helped them throughout the year. This includes their teachers, parents, and their advisor, Mr. Spencer Highsmith. These accomplishments would not have been possible without the help and support of each one of these individuals. The chapter has had a great year and is very proud of their Outstanding Achievement.