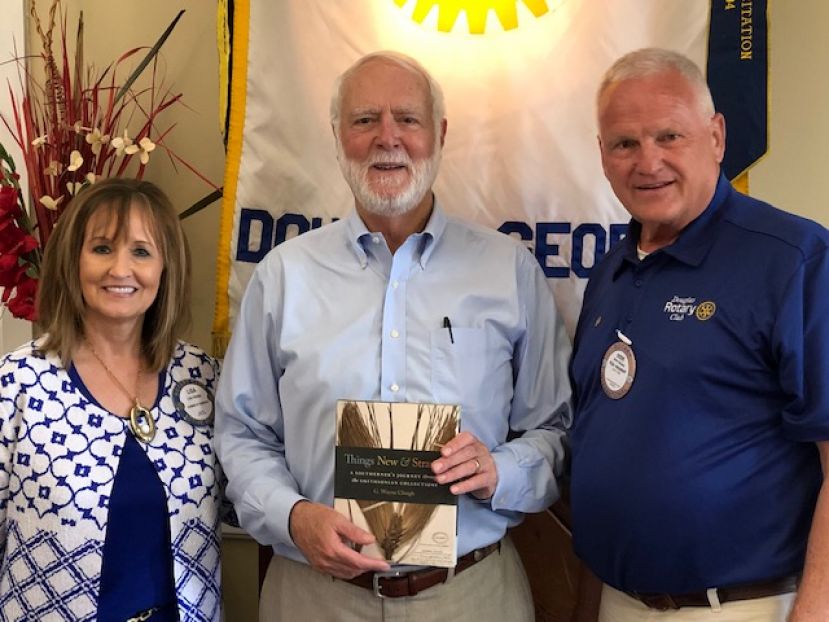 Douglas-Coffee County welcomed native Dr. G. Wayne Clough home as many friends, relatives, and community members gathered to hear about his latest book, Things New and Strange: A Southerner's Journey Through the Smithsonian Collections.  Dr. Clough was the featured speaker at Douglas Rotary Club and at South Georgia State College's William S. Smith Library where books were available and an opportunity to be signed by the author.

During his presentations, Dr. Clough shared that he recognized he had been given an unique opportunity as the former Secretary of the Smithsonian Institute and decided to begin researching what "the Smithsonian collections could tell him about South Georgia, where he had spent most of his childhood in the 1940s and 1950s."  His book provides a very engaging account of his research and the discovery of more extensive findings than he ever imagined possible.  He also shared how non-specialists can use the museum's archives.  Dr.  Clough is also the author of Seeing the Universe from Here:  Field Notes from My Smithsonian Travels and all proceeds from Dr. Clough's books go to the Smithsonian Institute.

Dr. Clough served as the 10th president of the Georgia Institute of Technology from 1994 to 2008 and as the 12th Secretary of the Smithsonian from 2008 to 2014.  A native of Georgia he earned his BS and MS degrees from Georgia Tech and a PhD from the University of California at Berkeley.  He has taught at Duke, Stanford, and Virginia Tech, where he served as the Chair of the Department of Civil and Environmental Engineering and Dean of the College of Engineering.  In 1992 he was named Provost at the University of Washington.  Clough was elected to the National Academy of Engineering in 1990 and the American Academy of Arts and Sciences in 2010.  He was appointed to the National Science Board and the President's Council of Advisors on Science and Technology by President George W. Bush.  He has received honorary doctorates from twelve universities.

During his tenure at Georgia Tech the university rose into the top 10 among public universities, hosted the 1996 Olympics, extended the campus into Midtown Atlanta, expanded overseas, initiated the Tech Promise program for financially disadvantaged students, and improved student retention and graduation rates.

His tenure at the Smithsonian was marked by improved relations with Congress, a growth in museum visitation from 25 million to 32 million, a commitment to digital outreach and education, a focus on sustainability and interdisciplinary activities, and enhanced private support.   The new $570 million National Museum of African American History and Culture was funded and major renovations were completed at seven of the Smithsonian's 19 museums and galleries.

Dr. Clough now lives in Atlanta where he is active as a lecturer and author.  He teaches part-time at Georgia Tech with a focus on leadership, climate change, and is working to create access to a university education for students from low-income families.

For his book cover Dr. Clough chose one of his findings among the National Museum of National History, a longleaf pine specimen collected during the winter of 1903-04 by Roland Harper.

More in this category: « Wiregrass to host Guardian Bank Entrepreneurship Academy in September Most degrees conferred at South Georgia State College since 2013 »
Login to post comments