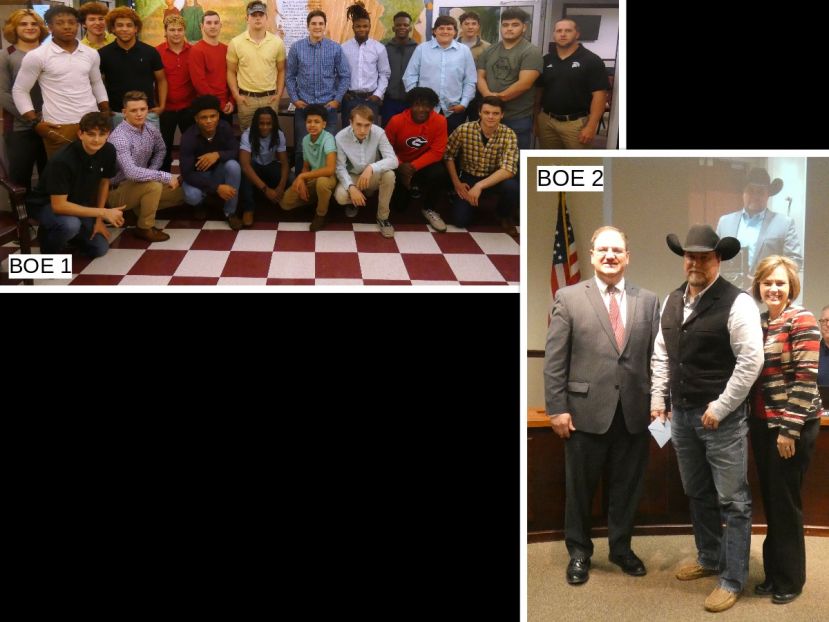 The swim team, along with their coach, Barbara Joiner, were also recognized for their achievements from the season. The boys won their 9th region title and the girls won their 5th. They had five girls and ten boys qualify for the state swim meet. In the 6A region, the boys finished 32nd, 34th, and 46th, and the girls finished 43rd and 46th. Congratulations to the swim team for their hard-earned success this year.

Mr. Berry grew up in an agriculture rich community in Moultrie, graduating from Colquitt County High School in 1983.  He began his post-secondary education at South Georgia State College on a baseball scholarship. He then transferred to the University of Georgia and completed his agricultural education degree in 1987.  He began his career at Coffee High School in the fall of 1987, as an in school agriculture teacher. During the course of his 33 year career in agricultural education Mr. Berry has served the majority of those years as the Young Farmer Adviser.

Over the course of his career, Mr. Berry’s philosophy of teaching did not change but grew to encompass the changes within our culture.  His beliefs are founded on the fact that agriculture plays a significant role in the existence of our society and that it is extremely difficult to find anything that is not directly or indirectly tied to agriculture or an agri-business.  Throughout his years as an educator, working with high school students and young adults has been both challenging and rewarding. The relationships that have been made with former students have created friendships that have transcended decades.

As both FFA and Young Farmer Adviser, Mr. Berry has worked in all areas of agriculture but his greatest passion is working with youth livestock projects, livestock judging, event coordinator for livestock shows, as well as serving as the livestock consultant for the Billy Walker Agriculture Center at Coffee Middle School.  During his time at Coffee High, the number of students participating in livestock projects has tripled. He is known throughout the state for his knowledge and expertise in the selection of, feeding, and breeding of quality show livestock.

Mr. Berry has made a difference in the lives of many students and has taught them many lessons that go beyond the classroom. Congratulations to him for his outstanding achievement. Mr. Berry has been married to his wife, Sherri for over 33 years.  They have two sons, Kody and Dake.