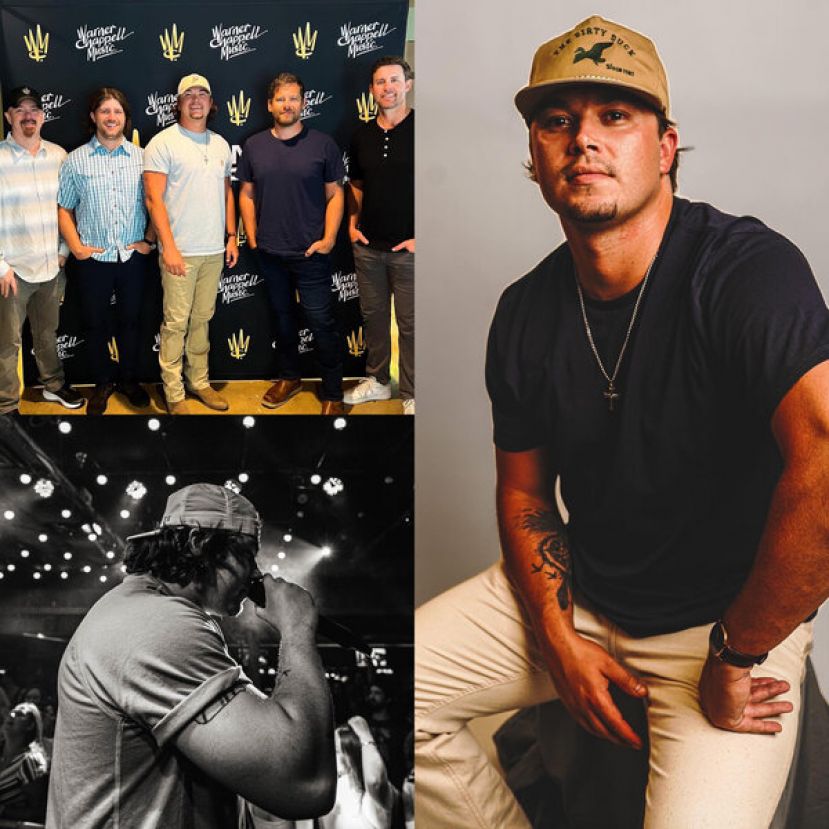 In 2016, Douglas native Tyler Chambers moved 8 hours away from his hometown to Nashville with only one dream in mind - doing whatever it took to make a name for himself in Music City as a songwriter/singer. This week, Chambers' hard work paid off six years later when he signed a global publishing deal with Warner Chappell Music.

While Chambers has always loved writing music, his passion for songwriting and singing deepened when he moved to Wyoming to work as a ranch hand after attending college. While in Wyoming, Chambers began picking up his guitar more often, which led to him considering pursuing a lifelong career in music.

"It was always something I had in the back of my mind, but never really something I had taken seriously until that move to Wyoming. It wasn't realistic to me until I began to really perform in front of people or let them read my lyrics, and they were really encouraging, so I went for it," Chambers said.

After working on the ranch for the summer, Chambers booked a one-way trip to Nashville, a town where he knew no one but would be the best place to jump-start his career. Chambers said any self-doubt or nervousness he felt quickly faded when he arrived in Nashville.

"I fell in love with this city, and I knew I was finally doing what I love and was meant to do," Chambers said.

Chambers took small part-time jobs, with his last career before pursuing music full-time, being a tour guide on a John Deere tractor through downtown Nashville, to make a living, but continued working on his passion. "If I wasn't working, I was writing a song in my apartment or performing at any bar or event center that I could," Chambers told DouglasNow.

In April 2019, Chambers won a raffle of 60-75 artists to have a song recorded by producers of Nashville's well-known recording studio, The Ruckkus Room. The song he chose to record, “Kiss Me Like That,” received more positive feedback than he expected and was the turning point in his career.

Since 2018, Chambers has written over 400 songs, including released hits like "I Saw Your Car" and "See That Summer," and has over 27,400 monthly subscribers on Spotify. He has also co-written songs with well-known writers, including Adam Sanders, Muscadine Bloodline, Noah Hicks, and Bryce Mauldin.

After years of chasing his dream all over Nashville, the moment Chambers "waited on for a long time" recently came. On Monday, publishers with Warner Chappell Music, the global music publishing arm of Warner Music Group, announced that Chambers had signed a global publishing deal with the company.

In a press release, A&R Director, WCM Nashville, Will Overton praised Chambers by commenting, "Tyler has such a unique perspective in his songwriting

that brings his story to life. It has been so fulfilling to watch his talent evolve and grow since we first met!"

Randy Montana of Six Ways to Sunday Music publishing company, who has been working in the studio with Chambers, followed, "Tyler is such a great talent. He really puts in the work to take his writing and singing to the next level. Watching his career take shape has been a pleasure to be a part of."

According to its website, Warner Chappell Music has offices in more than 20 counties and is the home to a "wide array" of songwriters of various genres. The company also shows an impressive list of artists and songwriters they currently work with, including Thomas Rhett, Katy Perry, Grateful Dead, Led Zepplin, Madonna, and Cardi B.

Chambers told DouglasNow he is currently "recording a lot and just trying to push as much music out as possible." He continued, "I've known for a long time that this is what I wanted to do with my life. Growing up in and around Douglas made me the writer and musician I am today. I will forever be thankful for my hometown and the people in it. Never be scared to chase your dreams. South Georgia will forever hold a special place in my heart."

More in this category: « Brawl breaks in jail after inmate sprays others with feces, urine Police, code enforcement mobilize to stop spike in illegal activities »
Login to post comments