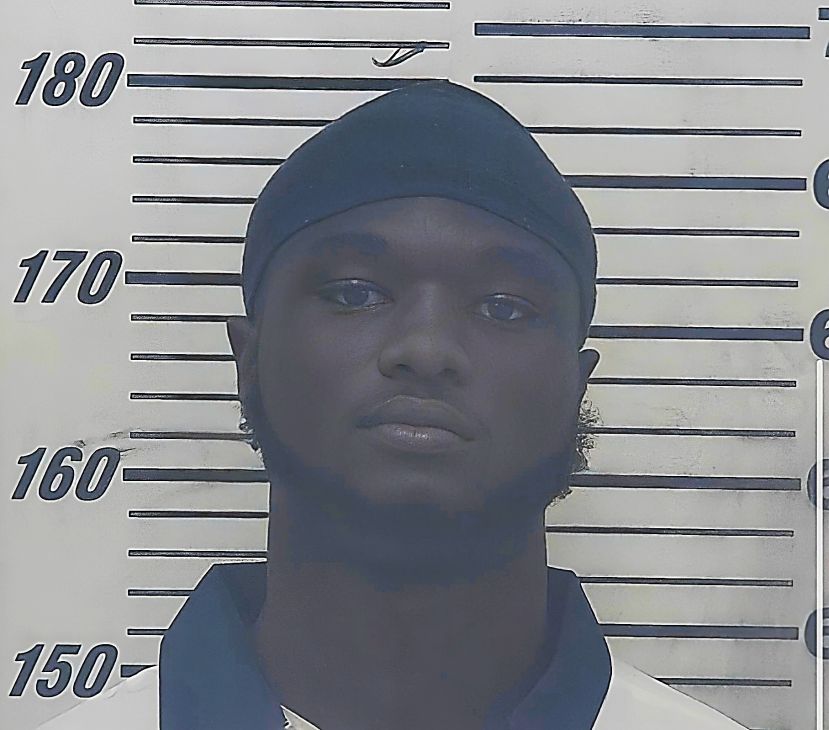 Kwame Preston will now spend the rest of his life in prison after being convicted of assaulting, sodomizing, and robbing a 93-year-old woman in 2018. The judge handed down the maximum sentence on Preston's charges, which added up to more than two life sentences.

Prior to the trial, Preston fired his defense counsel with the public defender's office after alleging that he hired a private attorney. However, an attorney did not appear Tuesday morning and Preston represented himself. Assistant District Attorney John Rumker prosecuted the case, with Judge Andy Spivey presiding.

The hearing began with John Rumker giving brief facts of the case to the jury. Rumker argued that Preston broke into the home of the victim, who now resides in a nursing home, in Nicholls on October 22, 2018. The statements continued, with the prosecutor accusing Preston of assaulting, robbing, and sodomizing her before leaving in her vehicle. When Preston was arrested on charges of aggravated sodomy, aggravated assault, theft by taking, and armed robbery, deputies discovered, the victim's cellphone and car key in his pocket. Although the evidence was circumstantial, Rumker said it was "powerful."

Preston followed with his statements, however, they were cut short soon after. While speaking to the jury just a few moments into his opening, Preston claimed he was "forced" to defend himself against the charges. Rumker quickly stood to object to the comment, with Judge Andy Spivey then removing the jury from the courtroom.

Rumker argued that Preston was not forced into representing himself, and was "trying to gain sympathy from the jury by misquoting what happened."

Preston told the judge, "I'm just trying to defend myself. I don't know what I'm doing, and all I know is that I am innocent. I know it's his [Rumker] job to prosecute the charges, but he doesn't know if I did this crime. My mama said my attorney, and I don't know why he isn't here, filed motions asking for a continuance. Everyone keeps looking at me crazy because I don't have a lawyer, but I've been in jail and can't handle all this stuff."

Judge Spivey told Preston an attorney had not filed a motion on his behalf as of that morning and reminded Preston that he had representation, who he chose to release.  "You had an attorney, but you voluntarily released him, and we went over this yesterday, exhaustedly." The judge also warned Preston that if he made another "improper" statement or "turned this into a spectacle," he had the power to remove him from the courtroom. "I don't want to do that, and you've behaved yourself well during these proceedings, but I'm just telling you," Spivey said.

After the judge's comments, Preston chose to not continue giving an opening statement and asked only one question to a witness during the entire trial.

Rumker and Assistant District Attorney Morgan Kirkland read a deposition given by the victim to the jury, as the woman was not in attendance. Rumker informed the jury that the deposition was taken earlier this year after she suffered a stroke.

Despite the victim's medical issues, she was able to give a detailed narrative of what occurred the day she was assaulted and robbed. The victim told Rumker that the morning the crime occurred, a man knocked on her door asking for a key to one of the homes she rented. She stated that she gave the man, her tenant's boyfriend, the key, and he quickly brought it back.

About 5 to 15 minutes later, according to the victim's testimony, she heard another knock at the door. When she answered, she recalled seeing a young, black male with a grey jacket on that a hood, which was pulled over his face. The man asked the victim if he could use her bathroom and she responded, "You are a stranger and that wouldn't be sensible of me." She said she told the man he could use the bathroom in her pool house in the backyard, but was not allowing him to enter into her home.

The man then walked in the door, despite the victim telling him that he was not welcome inside the residence. She said when he entered, the man told her to give him $10, to which she obliged. He then asked her for "big money" and she gave him two $100 bills that were inside her billfold in her kitchen.

The victim testified that the man told her to go to the other side of the house and then said, "I have a gun." When Rumker asked the victim if the man had a gun, she said she could not recall.

The victim continued, saying the man ripped out the landline telephone cord from the wall. After that, she stated, the man assaulted her, which included grabbing a "heavy glass ashtray" that was on the dresser, and he hit her multiple times in her head, causing her to bleed. He said the man told her he was "going to get the other boy" and left the residence. She then called 911 and gave statements to local law enforcement and GBI investigators.

As the victim walked into the kitchen to close the door, she said she noticed her vehicle from her carport was missing.

Several officers and investigators took the stand, including current Nicholls Police Chief Jamie Merritt, Douglas Police Department Corporal Fred Crowder, and current Coffee County Board of Education Police Chief Chris Elrod (who worked the case and was one of the officers that located the victim's car), and GBI Crime Scene Specialist Chad Lott.

Merritt told the jury he knew the victim before the assault and was the first to arrive at the scene. He reiterated many of the same statements the victim gave during her deposition, and said when he spoke to her, she was "shaken up and scared." While the victim couldn't recall at the time of her deposition if she saw the man holding a gun, during her 2018 interview with Merritt, she reported seeing a firearm in his hand but did not describe the weapon.

After speaking to the victim, Merritt said he went next door to the rental property the victim owned and was able to get in contact with the tenant, who was at work at the time. She confirmed to Merritt that a "younger, black male" was living with them, and identified him as Kwame Preston. Testimony revealed that the investigation continued throughout the day, with the car being located that afternoon on Brantley Boulevard on the side of the road near a wooded area.

According to Crowder, when the car was discovered the GBI was notified and agent Chad Lott arrived on the scene shortly after. Lott told the jury that when he arrived, the vehicle was locked, with the passenger window down. He said he reached in and "popped the lock" and conducted a search. Nearby, not far from the car in the wooded area, Lott discovered a BB gun "wrapped up in a pair of boxers." A few clothing items were also located close by in the same area.

Preston, according to the testimony, was apprehended at a convenience store the following day. When the deputies searched Preston prior to transporting him to the Coffee County Jail, they discovered a Samsung cell phone and a Ford key FOB, both later confirmed to belong to the victim.

Rumker showed the jury photos of the woman's phone screen, which showed that Preston's Facebook account had been logged into on the victim's phone. Several messages on the device from the Facebook Messenger app were also presented as evidence, including individuals reaching out to Preston via Facebook after a BOLO had been released for his location. Many of the messages were sent from people telling Preston to "turn himself in" and "to stop doing stuff like this."

In one of the messages, Preston reached out to a person asking for help, saying he was "cold" and "needed a ride."

The GBI specialist who performed the recovery on the victim's phone explained that the messages shown from Preston's Facebook account were all sent and received after the assault and robbery occurred.

Preston asked the specialist, Chad Lott, about a text message that was documented in discovery, but not presented to the jury by the prosecution. The image of the message was then presented to the jury, which showed Preston responding to an individual stating law enforcement was "looking for him because they thought he had something to do with a robbery. Preston responded to the person, "I ain't do it."

The tenant who was residing in the victim's home next door testified that Preston had been living with her and her boyfriend, after being asked if he could "stay for a few weeks." She was working at Sonic at the time and left for work early that morning, with her boyfriend driving her. When she left, she recalled Preston sitting on a love seat.

Although the tenant's shift at work didn't end until 5:00 that afternoon, she said she was informed that "something" had happened with the victim later that day. She left work early and when she arrived at her home, she met with several individuals about the crime that had occurred.

According to the witness, she went inside to look for the BB gun that belonged to her son, and couldn't locate it, along with a few of her boyfriend's clothing items and a pair of black and white gloves.

The BB gun recovered near the victim's vehicle was later identified by the witness, and confirmed to be the gun that was missing from her home. She also identified the glove discovered to be hers as well.

Another individual who lived near the victim told the jury that on that same day, he observed a black male he didn't know driving the victim's vehicle at a high speed heading toward Douglas. The vehicle was picked up on his home surveillance cameras and presented to the jury. He said when he saw the vehicle, he called Nicholls Police Chief Jamie Merritt to let him know what he had seen.

Kellyn Wilkes, GBI Crime Scene Specialist, also testified and went through photos of the crime scene with Rumker. The evidence showed many images of the home, including blood drops on the bed and carpet. Photos of the victim's injury on her head were also presented to the jury, along with a photo of the ashtray that was used as a weapon.

After the evidence was presented, Preston declined to take the stand and did not give closing arguments. Rumker however did give a closing, asking the jury to find Preston guilty on all charges.

The deliberations took approximately 15 minutes, with the jury finding Preston guilty on all four counts.

Before sentencing, Rumker told Judge Spivey, "Kwame Preston was found guilty on all charges, two that carry life, one that carries a 10-year sentence, and one with a maximum of 20 years. The victim was 93 when this happened. I can't imagine anything else more awful in her life happening to her, except maybe that her son died waiting on this case to go to trial. Mr. Preston only cares about what Mr. Preston wants. He will take whatever he wants from anyone if he can take it from this victim. It doesn't matter if they're 93 years old, or 3 years old. The only way to prevent this from happening is to give him two life sentences consecutive to each other, 10 years on count 3, and 20 on count 4. I don't think there is anything redeeming about him."

The judge appeared to agree with Rumker and sentenced Preston to the maximum penalty, two life sentences to serve consecutively, followed by 10 years and 20 years.

Wednesday, Carlton Speight will stand trial on one count of possession of a firearm by a convicted felon. The trial will begin at 9:00 a.m. in the Superior Court of Coffee County.