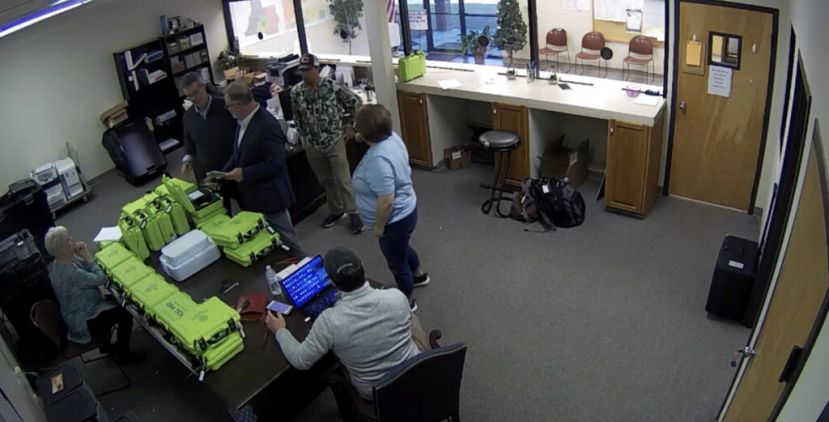 DOUGLAS – Sitting at a back table at Ole Times restaurant, Larry Nesmith was putting a cold drink to his lips when his phone jangled. It was his wife calling. They live out near the high school and kids in their trucks can get a little excitable after school. She said one smacked a fence, then sped off. Blue lights from the sheriff’s car zipped by moments later.

“That’s the kind of news we’re used to, a kid in a truck,” said Nesmith, a Democrat, and a community activist who has run for local office. “This other stuff? Not used to that around here.”

“This other stuff” was the breach of the Coffee County Elections and Registrations office Jan. 7, 2021. Cathy Latham, the chair of the Coffee County Republican party, Misty Hampton, the county elections supervisor, and Eric Chaney, a member of the county elections board, were involved in opening up the elections office on W. Ashley Avenue for cyber sleuths working for the conspiracy-spinning attorney Sidney Powell, whose chief client was President Donald Trump.

The computer guys copied hard drives and peered into the workings of the proprietary software of Dominion Voting, which provides the voting technology used by the state. They claimed to have scanned every vote, according to court documents. They were looking for supposed vulnerabilities in the voting machines that could help explain Trump’s loss in the 2020 election. They also wanted evidence of election fraud, which seemed cockamamie in an election where Trump won 70% of the vote in Coffee County.

Now the Georgia Bureau of Investigation and the Fulton County district attorney are investigating and so is the office of Brad Raffensperger, the Secretary of State, which was first notified by a new election director in spring of 2021 that the password no longer worked for the server and that he  found a notorious Trump supporter’s business card near the computer Hampton used at the Coffee elections office. That led to a state official removing the server the following month.

In response to a subpoena filed by the plaintiffs, Coffee County attorneys turned over video this week that revealed footage of the elections office on January 7, 2021, when the county GOP Chairwoman Latham, election board member Eric Chaney and election director Misty Hampton were joined by Hall, Paul Maggio, chief operating officer of Atlanta-based forensic data firm SullivanStrickler.

The news of an attempted breach in Coffee County became public this spring after Marilyn Marks, executive director of the Coalition for Good Governance, released a recording of a phone call she had in March 2021 in which Atlanta bail bondsman Hall claimed he provided a flight for a team of people to fly to Coffee County to copy voting records to discredit the machines and justify Trump’s efforts to overturn the election results.

Raffensperger publicly launched an investigation into the Coffee County breach episode last March because of pressure from Marks. The spring 2022 revelation of a video showing Hampton ushering in a group that copied voting machine records prompted Raffensperger to take a closer look at events that occurred at the county courthouse in January 2021.

As late as April, interim deputy secretary of state Gabriel Sterling denied the breach allegation. This summer, however, the secretary of state’s office confirmed that an investigation was underway and that the GBI was assisting.

Meanwhile, Coffee County is coping with making national news for all the wrong reasons. There is some national scorn of the south Georgia town and the county of about 43,000 because it is seen as a haven of disgruntled, undemocratic losers.

“I’ve talked to all the county commissioners, all of them Republican, except one, and they were shocked by what happened at the elections office and unhappy about it,” Nesmith said.

On Peterson Street, which is the Main Street here in Douglas, Jill Cravey, the owner of The Crave Boutique on Peterson Avenue, couldn’t contain her disgust.

“I trust none of them now after this, Democrats and Republicans,” she said. “I pay all this money in taxes for this? It is a big mess.”

Three women eating lunch at Sparky’s downtown did not know the details of the attempted breach. Their eyes got wide with interest as they heard of local officials helping outsiders learn more about the inner workings of Coffee County’s voting system.

Others who were stopped and asked about the breach on Peterson Street this week just shrugged and said they had not really followed the episode.

Latham has moved to Texas. Hampton was fired as elections supervisor and is working at the bank. Chaney resigned his seat on the elections board and is working on his family’s used car lot.

It remains to be seen if this costs Coffee County more than just a black eye.

Mike Hassinger, a spokesman for Raffensperger, did not return an email request asking about the costs of the breach and whether they would be passed on to the county.

Wesley Vickers, the county administrator, told the Georgia Recorder in his office Monday he is not aware of the state billing the county for new election equipment, or the cleanup.

Across the street at the Elections Office, Rachel Ann Roberts, who has been the elections supervisor in Coffee County for nine months, said there has been no request by the state for money to replace voting equipment.

“What about attorney’s fees in dealing with Dominion whose software was examined?” Nesmith said. “Do I and other taxpayers have to pay for that? What are all the costs to taxpayers of Coffee County associated with this breach?”

Robert Preston Jr. runs the local online media site DouglasNow. He said he was a neighbor of Hampton, the fired elections supervisor, and she is a friend. Preston said the local officials “honestly believed something happened statewide” as far as election fraud and that is why they opened the elections office to the so-called “cyber ninjas” supporting Trump.

President Joe Biden defeated Trump by 11,779 votes in the state. Trump tried to shake down Raffensperger for votes to overturn Biden’s win and one of the avenues was to challenge the worthiness of the voting machines.

Preston insists there has been no county-wide condemnation of Latham, Hampton, and Chaney.

“I think the majority of the people here in Coffee County feel like the efforts by the individuals who have been named in this event were acting in good faith to try to uncover potential election fraud,” he said. “And when we’ve posted stories to provide some coverage, the comments locally that come in, not all of them, but most of the comments locally, seem to support what happened.”

Nesmith disagrees and said many people in the county are upset with the trio. What’s more, Republican supporters in the county he has talked with are not as vociferous as others around the country about Trump being cheated out of the White House in 2020.

“I don’t hear it about how Trump really won, I really don’t,” Nesmith said.