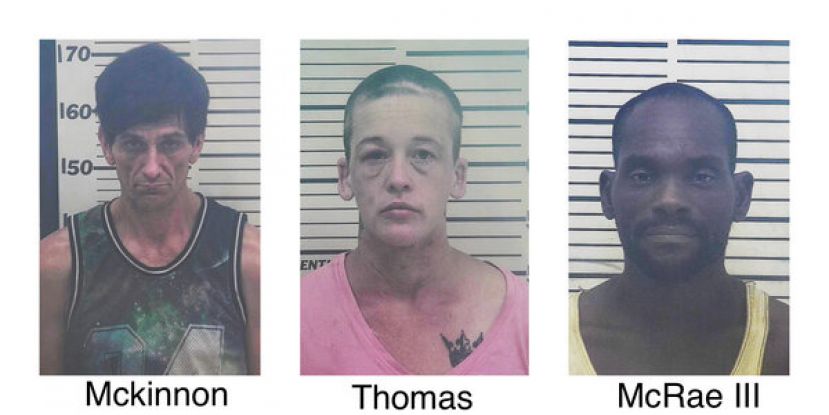 47-year-old Michael McKinnon, 47-year-old Luke McRae III, and 36-year-old Kimberly Thomas were all recently arrested for allegedly trying to break into McKinnon's grandmother's home after she denied giving him a key to the residence. While the suspects were being questioned, law enforcement reportedly discovered a glass pipe and suspected methamphetamine on McRae.

According to a Coffee County Sheriff's Office report, on September 19, around 10:44 a.m., a deputy responded to a residence on Daisy Avenue, listed as the home of an 85-year-old woman. When the deputy pulled up, he allegedly witnessed a man attempting to pry open a window with an unknown object in his hand. He approached the men and observed the object in the individual's hand was a knife, and ordered the suspect to put the knife down. The suspect, identified as McRae, did as the officer said and was handcuffed.

The deputy stated that he asked McRae what he was doing and that he told him he was trying to help his friend get inside the home by using a kitchen knife to unlock the latches on the window and pry it open at the bottom. Prior to the search, the deputy asked McRae if he had anything illegal on him, and McRae admitted to having a glass pipe in his pocket. The report said during the search, the deputy found a pipe containing black residue, several tools, jewelry, and a "small plastic bag that appeared to be busted with a white crystal like substance" discovered in McRae's pocket.

The homeowner's daughter then spoke with the deputy and stated that she saw three individuals on a home surveillance camera attempting to get inside the residence. She told the deputy that her mother, reported as McKinnon's grandmother, had told McKinnon in the past that he could come to her home anymore.

According to the report, the deputy watched the video, which he said showed McKinnon trying to get the door open, then stopping while a female tried. McRae was also allegedly seen attempting to get into the door under the carport in the video around half an hour later and then walking to the side window with a knife in his hand where McKinnon was. He is then seen leaning over and unlocking the window latch from the bottom of the top window pane, followed by trying to pry the bottom window pane with the knife.

The deputy stated, "I also could clearly see the fresh scratches and pry marks on the windows."

As the deputy was speaking to the homeowner's daughter, he reported seeing a female next door who matched the description of the one in the video. He asked the woman, identified as Thomas, if she had been next door earlier that day, and she said she had. According to Thomas, McKinnon was on the phone with the homeowner and she told him he could "go in and just to take a knife and get in." She said she used a watermelon knife trying to get through the door

and that McKinnon had left. Later, he came back with McRae, according to the report.

When the deputy asked the homeowner's daughter if McKinnon had spoken to his grandmother that day, she said he called twice, wanting to get a shower and asking her for a key to the residence. However, McKinnon's grandmother told him he could not have a key and to "not do something he regretted."

McRae, McKinnon, and Thomas were all arrested and taken to the Coffee County Jail.