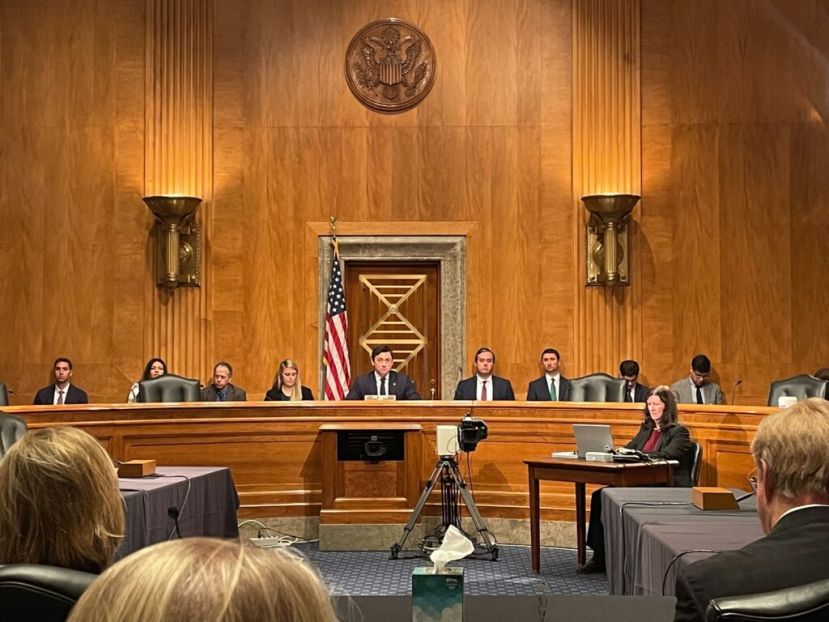 Photo courtesy of Ariana Figueroa/States Newsroom, originally published on www.georgiarecorder.com “It’s hard for me to think of anything that is worse than the federal government subjugating incarcerated women to unnecessary gynecological surgery,” said Democratic Sen. Jon Ossoff of Georgia.

Members of the U.S. Senate on an investigation panel on Tuesday grilled federal immigration officials about a bipartisan report that detailed how migrant women at an immigration detention center in Georgia underwent questionable gynecological procedures.

The U.S. Senate Subcommittee on Permanent Investigations released an 18-month bipartisan report that found migrant women who were detained at Irwin County Detention Center, known as ICDC, in Georgia were subjected to “excessive, invasive, and often unnecessary gynecological procedures,” and many of the women did not consent or understand the procedures they underwent.

Following the release of the report, the panel held a hearing to question Assistant Director Stewart D. Smith of U.S. Immigration and Customs Enforcement Health Service Corps at the U.S. Department of Homeland Security and Pamela Hearn, the medical director at LaSalle Corrections, which has federal contracts to operate detention centers across the country, including one at ICDC.

The report focused on one doctor contracted to treat detainees, Dr. Mahendra Amin, who performed “high rates” of unauthorized hysterectomies on ICDC detainees.

“It’s hard for me to think of anything that is worse than the federal government subjugating incarcerated women to unnecessary gynecological surgery,” Democratic Sen. Jon Ossoff of Georgia, who chairs the panel, said.

Dr. Margaret G. Mueller, an associate professor of obstetrics and gynecology at Northwestern Medicine who testified before senators, said that the women at the detention center underwent aggressive, unnecessary procedures. She said there were instances in which Amin failed to obtain consent.

“This cannot be allowed to happen again,” she said.

One of the witnesses, Karina Cisneros Preciado, detailed to senators how while she was getting a Pap smear at the medical center, Amin diagnosed her with an ovarian cyst. The treatment he conducted included a Depo-Provera injection, which is a type of contraception that suppresses ovulation.

Cisneros Preciado said she had no idea she was given a contraceptive, and said she would have refused because many of the women in her family have had bad reactions to certain types of birth control.

The PSI report found that another doctor who treated Cisneros Preciado did not find any evidence of a cyst.

U.S. Democratic Sen. Maggie Hassan of New Hampshire said she was disturbed that Cisneros Preciado said she never gave consent during her treatment. Hassan asked Cisneros Preciado if Amin had asked about her family medical history before prescribing the shot.

Cisneros Preciado said he never did.

“To this day, I am extremely scared to go to any doctor for myself and for my kids,” she said.

Cisneros Preciado said she was brought into the United States when she was eight. She told senators when she got married at 18, her relationship became abusive and when she called the police to stop one of her children from being abused, she was arrested.

While the charges were dropped, because of her immigration status, she was sent to the detention center, shortly after giving birth to her daughter.

Cisneros Preciado, said she was still breastfeeding when she was sent to the detention center. She said she was away from her daughter for seven months, and when she finally was released, her daughter “was already walking, she didn’t know who I was. She was scared of me.”

In December 2020, a class action lawsuit was filed by former ICDC detainees against ICDC, ICE,  Amin, Irwin County Hospital, and other federal and non-federal parties alleging that patients had undergone non-consensual and unnecessary gynecological procedures.

Cisneros Preciado is one of the plaintiffs in that class action lawsuit.

The subcommittee for its report subpoenaed Amin to testify, but through “his attorney he submitted an affidavit stating that he declined to provide testimony pursuant to his Fifth Amendment privilege against self-incrimination,” the report noted.

Amin has no board certifications, and in 2013 the Department of Justice and state of Georgia sued him, claiming that he committed Medicaid fraud by ordering unnecessary and excessive medical procedures. That lawsuit was settled in 2015, when Amin and his co-defendants had to pay a $520,000 settlement to the federal government while admitting no wrongdoing.

Ossoff grilled Smith, who is responsible for the health care of those incarcerated, on how his agency allowed this to happen and why there was no oversight over Amin.

“We weren’t aware of these complaints,” Smith said. “Until the whistleblower complaints.”

Ossoff continued to press Smith on how Amin was allowed to treat those in custody, despite not being board certified and while he was being sued by the government and state of Georgia for Medicaid fraud.

“It is an abject failure,” Ossoff said to Smith. “What we’ve heard today is that there was no real vetting.”

Congress was alerted in 2019 to the problems at the detention center by a whistleblower, Dawn Wooten, a nurse who worked at the Irwin County Detention Center.

The whistleblower, Dawn Wooten, was a nurse who worked at the Irwin County Detention Center. She alleged women at the facility were sent to an outside medical provider, Amin, who performed gynecological procedures — including but not limited to hysterectomies — without their informed consent.

In May 2021, DHS directed ICE to end its contract with ICDC and as of September 2021, all immigrant detainees were removed from that facility and sent to other detention centers.

And as of October 2021, ICE ended its contract with LaSalle. However, the federal government still has contracts with LaSalle to run other detention centers throughout the U.S.

Hearn, representing LaSalle, clarified that LaSalle is not involved in vetting off-site medical providers, like Amin, “nor could we have done so under the contracts or regulations governing our involvement at ICDC.”

But  ICDC is currently allowed to detain individuals under the custody of the U.S. Marshals Service.

The nearly 100-page report  includes interviews from more than 70 witnesses. Investigators reviewed more than 541,000 pages of records from the detention center, the U.S. government, LaSalle Corrections and Irwin County Hospital.

At the Irwin County Detention Center, roughly 4% of detainees housed there were women, from the years 2017 to 2020. The report found that Amin accounted for about 6.5% of all OB-GYN visits among detainees during that period, and he performed more than 90% of key OB-GYN procedures nationwide on women detainees.

“Dr. Amin was a clear outlier in both the number and types of procedures he performed compared to other OB-GYNs that treated ICE detainees,” according to the report.

All the outside medical experts interviewed in the PSI report found that Amin did not follow current medical guidelines for patient care, and all the medical experts determined that “Dr. Amin followed a pattern of treatment for almost all patients he treated regardless of their specific diagnosis or condition.”

Those medical experts the committee interviewed were part of a medical team tapped by attorneys and advocacy groups involved with the December 2020 suit to review the medical records for 19 ICDC detainees that Amin treated.

“These experts concluded that Dr. Amin subjected women to aggressive and unethical  gynecological care,” according to the report. “They found that Dr. Amin quickly scheduled surgeries when non-surgical options were available, misinterpreted test results, performed unnecessary injections and treatments, and proceeded without informed consent.”

The report interviewed six women who were former detainees and received treatment from Amin.

“These women described feeling confused, afraid, and violated after their treatment by Dr. Amin,” according to the report. “Several reported that they still live with physical pain and uncertainty regarding the effect of his treatments on their fertility.”

The report found that those women were not told what procedures they were undergoing and when they asked for more information, Amin told them he “was not authorized” to give them more information.

The report detailed how a former licensed practical nurse who worked with Amin observed patients signing consent forms as they “were about to drift off to sleep” from anesthesia and “were just coherent enough” to sign the medical forms.

More in this category: « Twelve witnesses take the stand in first day of Anderson trial  Man taken back to jail two days after being released on bond »
Login to post comments