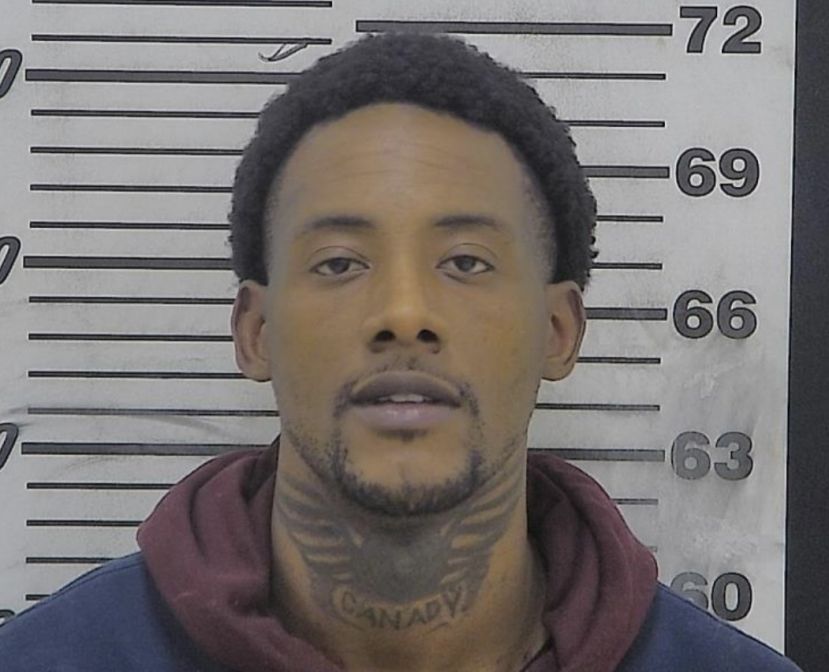 Trent Canady, 28, is facing more than 20 years in prison after he allegedly assaulted a woman by beating her with a pole, ripping her hair extensions out of her scalp, and striking her on the head. In a twist in the case, the victim admitted that she was not supposed to be at the residence due to a court order after she allegedly threatened to kill him in April.

According to a Douglas Police Department incident report, on November 19, around 1:06 a.m. an officer was dispatched to a home on North Pearl Avenue following reports of a domestic dispute occurring in the yard.

When the officer arrived, he noticed two individuals walking from the area and asked if they knew about the incident that had just occurred. One of the women told the officer she saw a male she identified as Canady beating a female with "the pole of a fan." She told the officer that she attempted to get the victim away from Canady but he then struck her in the hand with a pole. The officer noted that he did not observe an injury on the woman's hand.

The report states that the officer then spoke to Canady, who admitted to being in a verbal argument in the bedroom with the woman. Canady stated that the argument stemmed from her wanting to see his phone. He said that they ended up in the bathroom and the dispute continued. Canady claimed that the female turned the dispute into a physical altercation by scratching the front and back of his neck and both of his legs. The officer checked the restroom and noticed the curtain rod and curtain were knocked down into the tub. He also saw a piece of weave on the floor near the toilet.

Canady told the officer that he then went into the kitchen to hide a knife from the woman. She then left the house and attempted to damage his vehicle with a fan. According to the officer, he saw no damage to Canady's vehicle.

Canady claimed that he got the fan away from the woman and put his arm up to prevent her from re-entering the house. He also informed the officer that there was a TPO in place that restricted the woman from being at his home. He also denied getting physical with her.

Just after 2:00 a.m., the officer met with the victim at a house on Wynn Avenue. He stated that when he entered the home, he spoke with a "visibly distraught" female who was crying in a bathrobe. The officer also noted observing multiple signs of an assault on the female's body, including a welt on the right side of her face, several cuts on her face and bottom lip, two spots where her extensions appeared to be pulled out, and a cut on her left leg.

The woman reported that Canady had struck her in the head and grabbed her hair, "ripping out some of her weave." She also told the officer he began beating her with a fan all over her body when she went to the home to pick up her child. She also said  he had taken her phone.  The female added that she could not be at the address, per the court.

EMS arrived on scene and transported her to the hospital to receive treatment for her injuries. The officer went back to Canady's home, placed him under arrest, and transported him to the Coffee County Jail.

Documents filed in the Superior and State Courts of Coffee County show that the victim was arrested in April this year after she allegedly threatened to kill Canady. A stipulation in her bond restricted her from being Canady's home or being around him.

Four months later, she was charged again with a violation of a family violence order after she reportedly was at the residence and had a verbal dispute with Canady.

Canady was booked into the Coffee County Jail following the recent alleged assault on one count of aggravated assault and one count of battery — family violence. He has also faced other felony charges in previous years, including burglary, possession of cocaine with the intent to distribute, marijuana possession less than an ounce, and abandonment of certain dangerous drugs, poisons, or controlled substances.

A copy of Friday’s jail roster shows that Canady has not been released from custody.