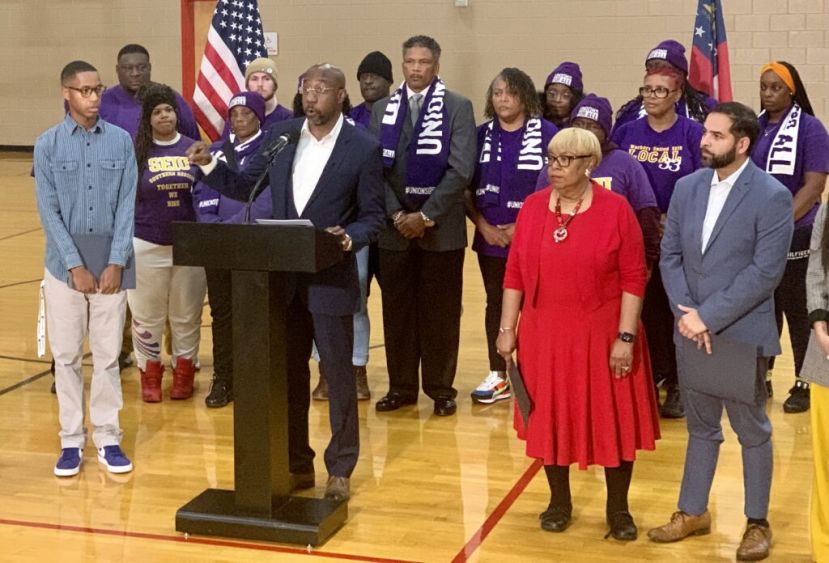 Democratic U.S. Sen. Raphael Warnock will return to Washington to represent Georgia for the next six years after winning his Senate runoff Tuesday, handing Senate Democrats a coveted 51st seat.

The Associated Press called the race at 10:26 p.m. Tuesday. By early Wednesday morning, Warnock had 51.3% of the vote, edging out Republican Herschel Walker by about 90,000 votes, according to unofficial results.

More than 1.8 million people voted in the shortened early voting period, and another 1.6 million voters cast a ballot Tuesday when steady turnout was reported across the state.

Warnock’s win will boost the spirits of Georgia Democrats, who failed to win any other statewide office last month. Warnock led Walker by nearly 38,000 votes last month, but did not achieve 50% of the vote, forcing the runoff.

His victory will also give Senate Democrats 51 seats, cementing their slim majority and giving them more power in committees and in approving federal and judicial appointments. Democrats narrowly lost the House in November’s midterm election.

Warnock greeted hundreds of jubilant supporters at a ballroom in the downtown Atlanta Marriott Marquis, walking on stage to chants of “six more years.” He told stories of being raised in Savannah’s public housing as the son of a mother who as a teenager worked as a sharecropper and a father who was a small business owner and pastor.

Warnock said the fruits of hard work bore out last night as Georgians put faith into action by voting.

“Georgia you have been praying with your lips and your legs, with your hands and with your heads and your heart,” Warnock said. “You’ve put in the hard work and here we are standing together.”

In a concession speech at the College Football Hall of Fame in Atlanta, Walker thanked his supporters and said he was proud of what his team had accomplished.

“Tonight Georgia voters stood up for our democracy, rejected Ultra MAGAism, and most importantly: sent a good man back to the Senate. Here’s to six more years,” Biden said on Twitter.

This is not Warnock’s first runoff win. In 2020, he and fellow Democrat Jon Ossoff went down to the wire against former Sens. Kelly Loeffler and David Perdue, becoming Georgia’s first Black and Jewish senators. Their narrow wins gave Democrats control of the Senate and inspired pundits to label Georgia a purple state.

Senators serve a six-year term, but Warnock’s 2020 win only earned him the right to finish the term of the late Republican Sen. Johnny Isakson, who retired due to his failing health.

Warnock jokes about how often his name has appeared on the ballot in just two years.

“Here’s why you know I want this job: This is the fifth time my name has been on the ballot in less than two years for the same doggone job,” he told supporters at a rally last week.

In response to the 2020 election, which drew unsubstantiated claims of fraud from former President Donald Trump and his backers, GOP lawmakers passed a sweeping election reform bill which, among other changes, shortened the runoff period to four weeks, down from nine in 2020.

The state intended to forego Saturday voting during the runoff, arguing that the available Saturday could not be used because it followed Thanksgiving and a state holiday formerly honoring Confederate General Robert E. Lee. Warnock and his allies successfully sued, and the Saturday vote brought out big numbers among Democratic leaning counties.

Warnock enjoyed a significant lead among early voters, and while Walker’s tally crept up throughout Tuesday night thanks to Election Day voters, he failed to overcome Warnock’s firewall. By 10 p.m., Walker had chipped away at Warnock’s early lead. The results, however, were actually trending against the former University of Georgia running back.

A few minutes prior to 10:30 pm, CNN, NPR and the Associated Press and other national outlets projected Warnock the winner even with thousands of remaining votes left to be counted.

A repudiation of Trump?

Walker’s loss represents a blow to Trump as he prepares for his 2024 presidential run. Walker is close with Trump, and the former executive’s endorsement helped him win the GOP primary in May, but party leaders reportedly discouraged Trump from traveling to Georgia to promote Walker due to his low approval ratings.

Outgoing Lt. Gov. Geoff Duncan, a Republican who has been an outspoken critic of Trump, said on CNN Tuesday night that he hopes Walker’s loss will spark a move away from the former president. Trump endorsed a slate of GOP candidates in Georgia, and only one of his favored candidates, Lt. Gov.-elect Burt Jones, won.

“He’s not picking these candidates because he thinks it’s good for the country or the party. He gave up caring about this country when he lied about the election. He cares about himself. And these candidates that he’s picking are pawns,” Duncan said.

“We need to hold Donald Trump accountable, and I hope sooner than later, he’s in the rearview here. We need to use this as a pivot point for us to move forward with a GOP 2.0 or call it what you want,” he said, adding that Republicans need a “new direction.”

Despite solid Republican turnout in November, the Trump-backed Walker got about 200,000 votes fewer than Republican Gov. Brian Kemp, who won handily over Democrat Stacey Abrams. Kemp tried to transfer some of his success to Walker in the runoff while Warnock stepped up his appeals to those split-ticket voters. After running separate campaigns all year, Kemp campaigned with Walker last month and recorded an ad urging voters to support Walker.

Instead of hewing toward the political center as candidates tend to do, Walker continued to run on cultural conservative issues like restricting transgender athletes from playing on school teams, limiting abortion access and eliminating “wokeism” from the military.

That was too much for voters like Francisca Small, an East Cobb Army veteran who calls herself a lifelong Republican or Libertarian. She was one of the 81,000 voters who backed Libertarian Chase Oliver in the November general election and said the thought of voting for either Walker or Warnock made her stomach churn, but pulling the lever for Warnock made her slightly less queasy.

“I voted for Warnock. I don’t agree with 99% of his platform,” she said. “But it’s the women’s right to choose. It’s the individual’s right to choose their own path, whether you’re trans and you want to choose who you’re supposed to be or you’re a child who doesn’t know what gender you want to be or what sexual orientation you have, that’s important, the ability to choose.”

Others, like Lawrenceville resident Lee Freeman, were proud to cast their vote for Warnock. A lifelong Georgian who has been delighted by Gwinnett County’s shift to the left in recent election cycles, she cast a ballot for Warnock at the Gwinnett County Fairgrounds Tuesday.

Like Small, Freeman said she has been turned off by Republicans’ positions on LGBTQ issues, especially since several of her friends identify as part of that community. The U.S. Supreme Court’s decision to end the federal protection of abortion rights also has her on edge.

“We already lost Roe v. Wade, and I really feel like there are other measures that are on the chopping block if Republicans take the Senate and the House,” Freeman said.

LGBTQ organizations were among the first to congratulate Warnock on his win.

Human Rights Campaign President Kelley Robinson called the senator “one of our strongest partners in advancing the cause of LGBTQ+ equality.”

“It should not be lost on anyone that Senator Warnock’s political opponents spent millions of dollars attacking him for his support for our community. They have failed. Georgians rejected these reckless attacks tonight,” she said in a statement.

Walker’s campaign was beset from the beginning by a host of scandals ranging from accusations of violent behavior toward his family, lies about his past achievements and former girlfriends who said he helped them get abortions despite his current anti-abortion stance.

Some Republicans like Elizabeth Jones, who cast her ballot at Sutallee Baptist Church, admitted Walker was not their first choice.

“The other guy is, as much as they slandered Herschel, is not much better,” she said, adding that she opposed Warnock’s position on abortion. “I don’t think Herschel Walker was our best candidate. I think Trump should have stayed out of it. I really liked (Kelvin) King. He was going to be a wonderful senator. And hopefully he’ll run in the future, but we can’t let our Senate go, so I didn’t have a choice.”

Others said they were proud to vote for Walker, often referencing the economy or their faith as key factors.

Tamekia White, a Snellville resident who is a small business owner and the mother of three, said Walker’s debate performance cemented her decision to vote for him.

A former Democratic voter, White said she has started leaning more toward Republican candidates in the last decade because she says they better represent her Christian views. White said she is frustrated by others’ assumptions that she must be a Democrat because she is Black woman.

“I don’t understand how a Christian pastor, who teaches God’s sheep the Word of God, thinks that abortion is OK,” White said, referring to Warnock. “And this is just one issue of many.

“But a person who believes the Bible, I don’t understand how they cannot believe God when he says, ‘I knew you before you were in your mother’s womb.’”

Warnock, a pastor at Ebenezer Baptist Church in Atlanta, campaigned on his history of public service while seeming to distance himself from Biden and national Democrats as conservative Georgians blamed them for a tumultuous economy. At campaign events, Warnock often touted money-saving measures he pushed like capping insulin costs for seniors on Medicare.

Movie director and producer Spike Lee and Atlanta Mayor Andre Dickens were among the luminaries, union representatives, and elected officials taking the stage at Warnock’s celebration proudly declaring that Warnock would not be denied.

Lee, an Atlanta native and Morehouse College graduate, said the nation is at a pivotal point with “agent orange” – former President Donald Trump – re-emerging to seek another term in office.

“The struggle continues for our people of color today,” Lee said. “Our ancestors are looking down upon us and they’re telling us to continue to do the right thing.”

Dickens said he lived out a “never let them see you sweat” motto like Warnock in a close 2021 mayoral campaign before decisively winning his runoff.

“This is the day,” Dickens said. “We are marching onto victory tonight.”