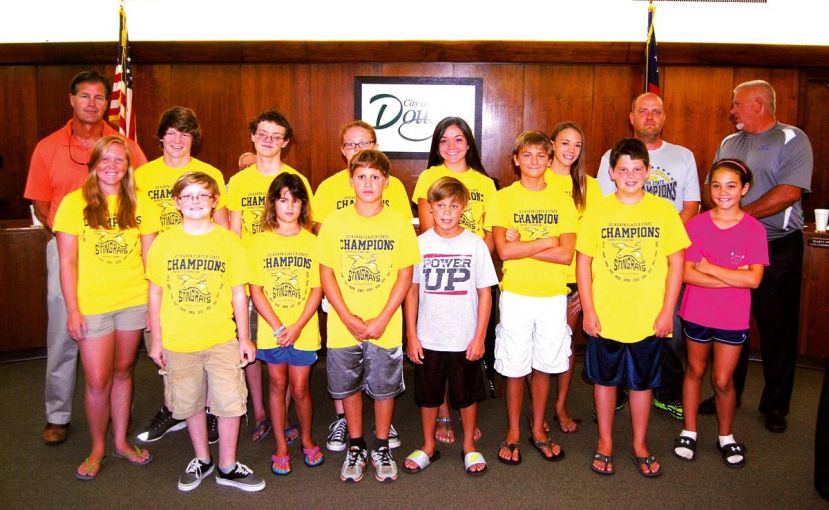 The Douglas City Commission recognized the Douglas Stingrays swim team at the City Commission meeting on Monday evening. Coach C.M. Jenkins spoke about the triumphs his team accomplished at the recent state meet. This year marked the second consecutive year that the team won a state championship and Coach Jenkins said the team is “getting better every year.” The Stingrays are becoming the team to beat in the state level competitions, and this reflects not only the hard work and dedication that the team members and coaches have put forth, but also the massive support that the community and the City of Douglas have shown.

The City Commission approved a proposal to purchase new police cars for the Douglas Police Department. Four patrol cars recently put out of service will be replaced with four 2015 Dodge Chargers purchased from Akins Ford Dodge Jeep Chrysler in Winder. In addition, a new police administrative equipped 2015 Dodge Charger was approved for purchase to replace the current vehicle driven by Chief Gary Casteloes. It will also be purchased at Akins in Winder. Equipment for each of the four patrol cars was approved by the Commission for purchase from West Chatham Warning Devices in Savannah.

There have been complaints from the public about trash not being picked up at their scheduled times. New TransWaste trash trucks have recently been calibrated to more efficiently pick up trash cans, and there have been issues with scheduling due to updates. The city is requesting those who have issues with trash pick up to please call and report the issue, and to always place your can by the road at the appropriate time.

Mayor James Dennis and the City of Douglas is offering to speak with anyone concerned with their light bills as there have been complaints about unexplained increases. Call customer service at 389-3420 to set up a time to meet and discuss your bill.

Georgia Henderson, the Director of Public Information for the City of Douglas, urges all who can to attend the upcoming Outdoor Expo scheduled for Aug. 21-22atthe Central Square Complex. Tickets for admission are $5 for one day or $8 for both days. Children 12 and under receive free admission. There are many events planned for the Expo, including cash and prize giveaways, a magic show, and a reptiles and raptors exhibit from Georgia Southern Center for Wildlife. The Dreadknots of the History Channel’s The Ax Men will appear on Saturday from 11 a.m. to 4 p.m. to meet fans. For more information about the expo call 912-383-0277.