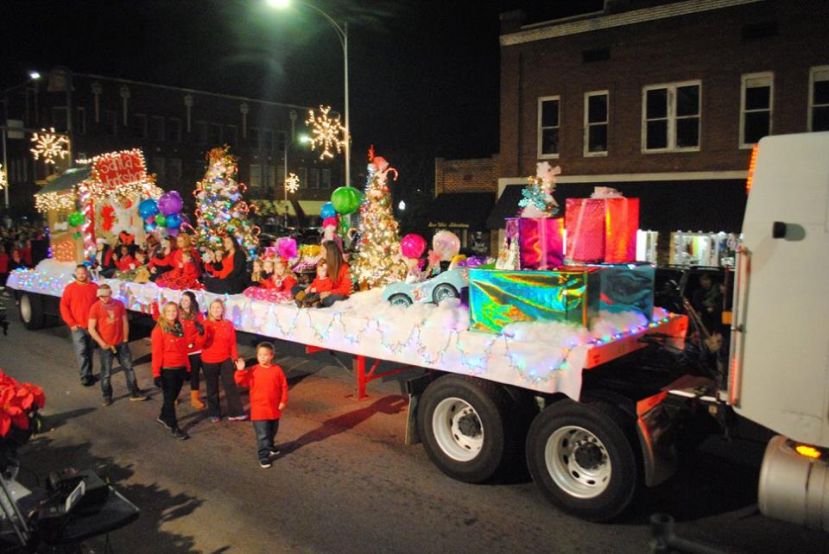 Photo courtesy of the City of Douglas Facebook page Horses have been absent from the Festival of Lights Christmas Parade. This year, they will be back. Pictured is the Studio 8 Dance Academy float from the 2015 Christmas parade.

For many years, horses were a fixture in the annual Festival of Lights Christmas Parade. After a scary incident or two involving the horses a few years ago, city fathers banned the animals from riding in the parade. This year, however, they will be making a return.

At Monday night’s regular commission meeting, commissioners voted to allow horses back in the parade – as long as they register with the city just like all other parade entries must do. According to Georgia Henderson, the city’s public information director, her department conducted an online survey in which they asked the community if people would like to see horses return to the parade. Response to survey indicated that community members wanted to see horses back in the parade. However, riders and/or horse owners must register with the parade and the horse owner and/or rider will be held responsible should any incident involving a horse take place.

Commissioners also voted to authorize city attorney Jerome Adams to begin condemnation proceedings to remove a disabled DC-4 airplane that has been at the airport for quite a while. The plane’s owner purchased the plane in Florida and was flying it home to Alaska when it experienced trouble. The pilot landed the plane in Douglas for repairs but the repairs were never made. The plane has neither been repaired nor removed. Adams has attempted to get the plane’s owner to remove the plane but no avail. After the condemnation process is completed, the city will likely sell the plane for salvage and keep the proceeds.

Funeral homes were also a topic of conversation at the meeting. The commission heard the first reading of an amendment to the Unified Land Development Code to allow funeral homes in the Town Center Commercial District. Currently, several funeral homes – including McIver, Ricketson, and Sims – are considered a legal non-conforming use. That means that they can operate in town but they aren’t allowed to expand or rebuild if they’re destroyed by fire or a natural disaster. This came to the city’s attention when Alvin Ricketson, owner of Ricketson Funeral Home, inquired about expanding his funeral home.

The second reading will be held at the June 6 meeting. A public hearing is not required for this amendment.

Commissioners also approved a request from Jerry Harper and Volunteers of America Southeast to rezone 39.15 acres at 902 North Wheeler Avenue from R-P to Industrial for Heritage Pointe Planned Development; a new contract for W&W Video Production for producing programming for channel 13; the waiving of facility fees for Joanne Lott (dba Southern Home Vintage Market) to host two events a year at Central Square; and a three-year contract with William Minkema (dba Outfront Management) to manage the Martin Center Theater.

More in this category: « Elixir Metals and Doors nominated for Manufacturer of the Year One incumbent loses, another is in a run-off in the aftermath of Tuesday's primary »
Login to post comments