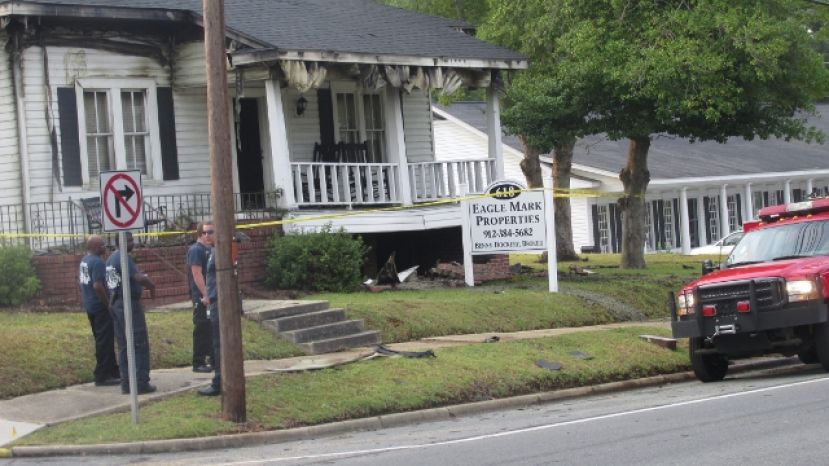 Jerry A. Hudson/DouglasNow.com City of Douglas firefighters were still on the scene of a suspected arson at Eagle Mark Properties, 618 N. Madison Avenue, Tuesday morning. The fire department responded to at least five occurrences overnight, which are suspected to be related.

Several fires which occurred overnight in Douglas are suspected to have been caused at the hands of arsonists, sources close to DouglasNow.com are reporting.

Firefighters responded to at least five incidents, which included four standing buildings and one trash receptacle. DouglasNow.com is currently in the process of gathering information on the exact location of each fire, though one has been confirmed as taking place at Eagle Mark Properties, located at 618 North Madison Avenue. Another was a residence on West Franklin Street located directly across from where another home burned to the ground just last week.

At approximately 11 a.m. this morning, the City of Douglas Public Information Department issued a press release in reference to last night's events, along with mentioning other recent criminal occurrences in the city.

"The Douglas Police Department and Douglas Fire Department are working together to continue their investigation into several residential fires which occurred within the last few weeks," the release says. "The Georgia Arson Control Board is offering a reward for information leading to the arrest of suspects in these fires. Anyone with information that could lead to an arrest should call 1(800) 282-5804. 'We are asking all citizens to stay vigilant and to report any suspicious activity,' says Police Chief Gary Casteloes.'We appreciate everyone who has provided information to aid our investigations in the past and encourage citizens to report tips to our See Something, Say Something Crime Tip line at (912) 260-3600.' The Douglas Police Department is also investigating an increase in damage to buildings, personal property, and criminal activity in the north area of Douglas. At this time, it is unclear if these incidents are related. The Douglas Police Department is soliciting any information in regards to these recent fires and burglaries. Citizens are asked to report tips to Sgt. Robert Sprinkle by email at This email address is being protected from spambots. You need JavaScript enabled to view it. or by calling (912) 260-3624. The following safety tips are being urged for citizens to practice at this time:
1. Report all suspicious activity, contact 911 if the activity is occurring at the moment.
2. Report all fires no matter how small.
3. Homeowners/business owners need to keep a close watch on their property and neighboring property.
4. Put all flammables and containers with hazardous materials out of reach of the public.
5. Trim shrubbery from around homes and businesses.
6. Install motion activated security lights on property.
7. Let neighbors or family members know if you are going to be out of town so they can keep a check on your property while you are away."
City of Douglas Public Information Director Georgia Henderson stated Tuesday morning that no further information will be released at this time regarding the ongoing fire investigations, and it remains unknown  whether any suspects have been detained or sought. Henderson would not comment on the possibility of a serial arsonist in the area or any other details regarding this recent string of fires.
The fires have apparently caused an unforseen problem with the city's water system, as well. Officials issued a second press release today warning citizens of potential water discoloration due to the extensive use of fire hydrants over the last few weeks.
"The fire department has used fire hydrants in the neighborhoods to combat the fires and, as a result, citizens may experience discoloration of their water known as 'red water'," the statement said. "If you turn on water and notice a cloudy, rust colored appearance, please make sure you run water until it runs clear to remove any rust build up in the waterline, especially before using water for washing or cooking."
DouglasNow.com will continue to update this story as information is provided and obtained.
Last modified onTuesday, 08 July 2014 21:21