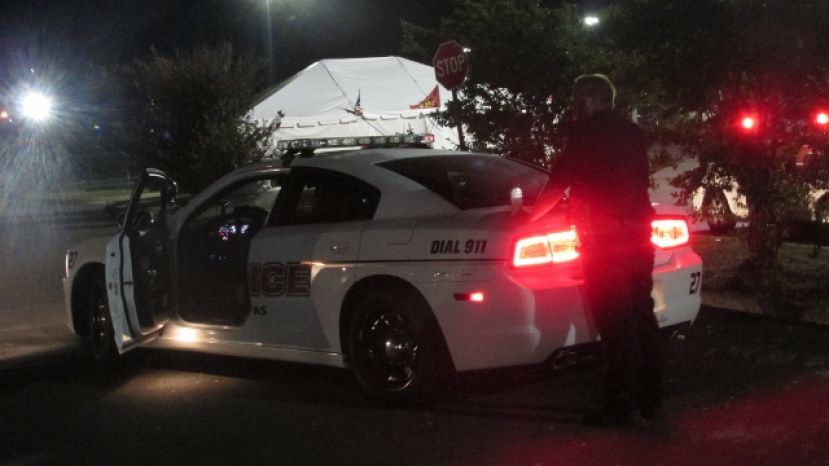 Jerry A. Hudson/DouglasNow.com Law enforcement secures a scene at the Wal-Mart store in Douglas early Thursday morning following the shooting of a City of Douglas police officer.

An officer with the Douglas Police Department was shot in the line of duty early this morning after attempting to initiate a traffic stop on subjects suspected of a robbery which occurred just moments earlier.

According to sources with the DPD, an armed robbery occurred at the Flash Foods store on the north end of Douglas at around 1:00 a.m. A short time later, Officer Larry Carter spotted a Chrysler convertible that matched the description of the robbery suspects travelling at a high rate of speed southbound through the city. When the officer attempted to conduct a stop in the area of the Wal-Mart store off Bowens Mill Rd., a passenger in the vehicle allegedly jumped out and ran. Officer Carter was shot in the leg as he attempted to chase the suspect on foot.

Douglas Police Chief Gary Casteloes states Officer Carter was airlifted to a trauma center in Savannah due to the nature of his injuries, but has since been released from the hospital. Casteloes reported Carter was on his way back to Douglas around noon today.

Casteloes further stated the Georgia Bureau of Investigation was contacted to take control of the shooting investigation since it involved an officer. He added the DPD will still be leading the investigation of the armed robbery at Flash Foods.

The driver of the vehicle was taken into custody at the scene, though his name has not yet been released by authorities.

At approximately 6:50 p.m. Thursday, Chief Casteloes announced the suspect being sought for the alleged shooting of Officer Carter had been located in the county by GBI agents and was arrested. The announcement came during the regular meeting of the Douglas City Commission.

"I have just been informed that the subject is en route to the Coffee County Jail," Casteloes said.

Chief Casteloes did not reveal the name of the suspect at this time.

DouglasNow.com will continue to update this story as more information is obtained and provided.