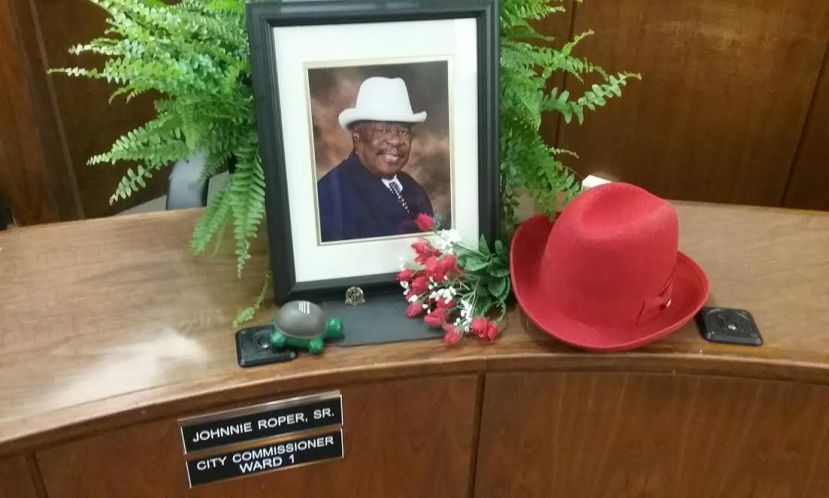 Brad Bennett/DouglasNow.com The city honored the late Johnnie Lee Roper Monday night during the first meeting held since his passing last Monday. The city will hold a special election to fill his seat.

At the regular City Commission meeting on Monday, March 27, City Attorney Jerome Adams stated that a special election to fill the seat of the late City Commissioner Johnnie Lee Roper (Ward 1) was almost a certainty.

The special election was not on the board's agenda, but Mr. Adams gave a statement to Douglasnow.com describing how the election would in all likelihood take place on June 20, 2017.

Mr. Adams stated: "There was a local act sponsored by our local legislative delegation that permits a special election on the city commission when there is more than one year left on a commissioner whose seat has been declared vacant. That bill has passed the house and the senate and it's now awaiting the governor's signature. I would expect the governor to sign that bill any day."

Mr. Adams went on to say that, when the governor signs that bill "the city will be able to announce that the special election will be held June 20. That's the next available date for a special election. There are only four dates during the year on which you can have special elections."

In regular business the Commission approved the Alcoholic Beverage Catering Ordinance. This ordinance allows alcoholic beverages to be served at catered events being held at a location such as the Weir Center or the Chamber of Commerce banquet room. A permit which costs $50 must be obtained by the caterer of any such event.

At the close of the meeting the Mayor and the Commissioners made comments honoring the memory of the late Commissioner Johnnie Lee Roper. They praised Commissioner Roper's long service to his community and lamented his passing. Mayor Paulk spoke movingly of the depth of sorrow felt by the community last week, having suffered such great loss in the passing of school board member Ronnie Johnson as well as that of Commissioner Roper.