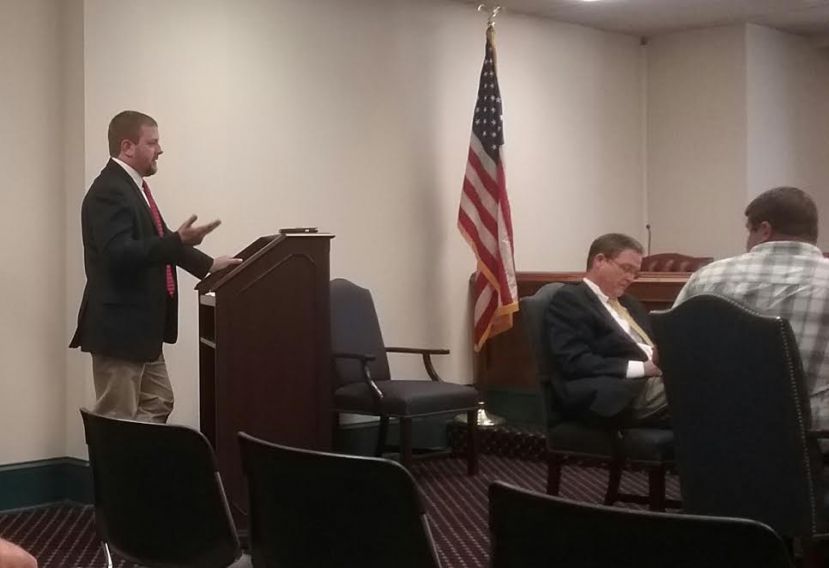 Bradley Bennett/DouglasNow.com Bryan Rumker of the Exchange Club discusses the annual fireworks display with the county commission during the pre-meeting work session earlier this week.

Mr. Rumker went on to say, however, that the 2017 fireworks exhibition had been scheduled and financed, and that planning for 2018, 2019, and 2020 shows was almost complete. He went on to say that those three fireworks shows would cost $10,000 each year and that the Exchange Club was $400 shy of that amount. He asked that the board consider providing that amount annually for the three prospective exhibitions.

Mr. Rumker also announced that the fireworks at this year’s show are being displayed by Freedom Fireworks of Dublin and that the Exchange Club would be partnering with 106.7 “The Buck” radio to provide musical performances and vendors at Jardine Stadium. Together the Exchange Club and 106.7 hope to present an all-day festival akin to those presented on the Fourth of July in days gone by, when there were softball tournaments, hole-in-one competitions, and other activities enough to keep families entertained for the entire day.

The board also approved the purchase of motor grader blades from Iron Peddlers Parts Division, Inc. The price of the blades was $19,579.20. The board then approved a $22,695.00 bid for the installation of an air conditioning system at the courthouse annex. Surrency Heating and Air submitted the bid.