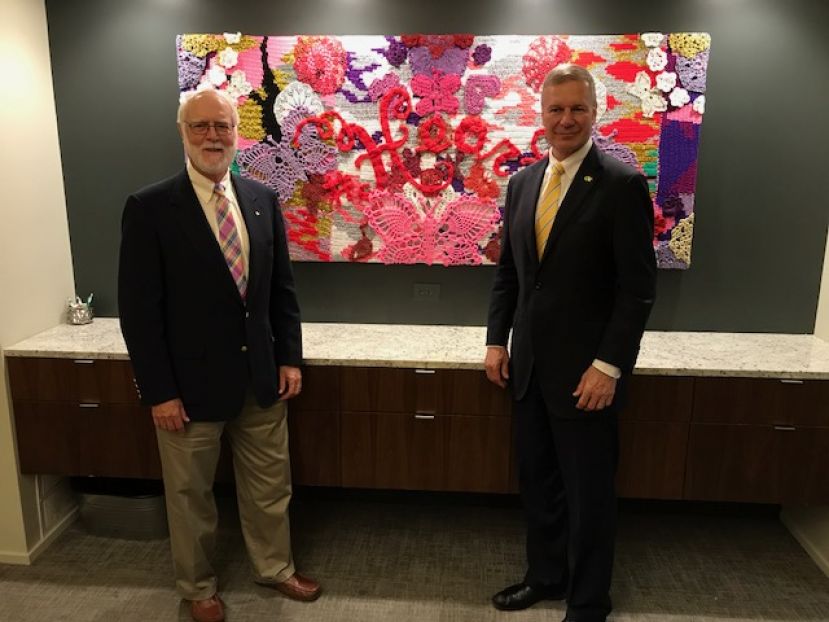 The president of the Georgia Institute of Technology, Dr. G.P. “Bud” Peterson was in Douglas on Tuesday June 20, 2017. He was here on the second stop on the 2017 Georgia Tour. This is the ninth Georgia Tour undertaken by Dr. Peterson. He began the Georgia Tech tradition when he became president in 2009. This year the Georgia Tour will cover 970 miles across South Georgia.

DouglasNow spoke with Dr. Peterson and G. Wayne Clough, PhD, Georgia Tech President Emeritus and Douglas native, at the Douglas Atrium Event Center. Dr. Clough was not only born in Douglas, but his father and grandfather served as mayors of the city. He certainly has his South Georgia bona fides in order. Dr. Bud Peterson grew up in Kansas. He fondly recalls places along Interstate 70 where cornfields stretch as far as the eye can see, and he remarked with wonder at how crop yields have increased since his Midwestern boyhood.

These two men had just come from touring the facilities of Optima Chemical on the Willacoochee Highway and were just about to have lunch at the Douglas Lions Club meeting, where Dr. Peterson would serve as the speaker. Dr. Peterson spoke in glowing terms of the work that Dr. Clough had performed during his tenure as president of Georgia Tech from 1994 to 2008. He said that he hoped to continue building on the progress that Dr. Clough had made.

Dr. Peterson said that the purpose of the Georgia Tour was, “...to let people know we aren’t just some institution that’s not connected to the community.” And indeed, Georgia Tech is much more than just the Atlanta campus, though that campus is the only place from which one may receive a bachelor’s degree.

Dr. Peterson spoke of Tech’s 27 locations throughout the state of Georgia. Through these offices and their personnel Georgia Tech seeks to develop manufacturing throughout the state and to help manufacturers connect with technology. He also made note of the fact that South Georgia State College was a great source of transfer students, and that this can be a cheaper way to attain higher education while giving the smaller schools room to grow and improve.

Dr. Peterson spoke at length about admissions. He said that applications in general have a 23 percent acceptance rate, but applicants from within the state of Georgia are accepted at a rate of 45 percent. When students transferring from smaller schools are taken into consideration the acceptance rate for Georgia native applicants is greater than 50 percent.

Since Dr. Peterson took the helm in 2009, Georgia Tech has seen a great increase in enrollment.  DouglasNow asked Dr. Peterson what he considered the key to boosting enrollment. Dr. Peterson quickly replied that Tech’s reputation had caught up with the school that Dr. Clough had built. And as president, Dr. Clough was indeed a builder. During his tenure, from 1994 to 2008, Dr. Clough oversaw more than $1 billion in new construction and improvements to the Tech campus.

Dr. Clough and Dr. Peterson were both excited about Georgia Tech’s ability to benefit agriculture. They said that soon farmers will use global positioning satellites and drones to map fields and deliver fertilizer and irrigation, not to entire fields but only where needed. This could save farmers a great deal of money, and make less impact on the environment. Dr. Peterson said flatly, “Autonomous tractors are coming.” He seemed genuinely excited when discussing the solar power projects in Jeff Davis County and other communities across the state.