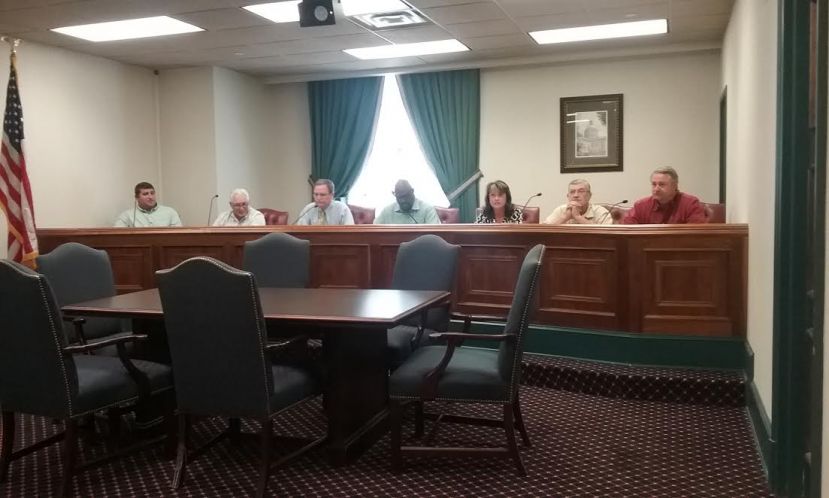 Bradley Bennett/DouglasNow.com The Coffee County Board of Commissioners

At the regular June 19, 2017 Coffee County Board of Commissioners meeting it was announced that there would be a joint City/County CommissionersBoard of Education meeting on June 29, 2017 at the County EOC building at 6:30 p.m.

During the regular meeting the board also heard from Mr. Stephen Pitts, the local director for CSRA probation services. CSRA is a private company and provides its services to misdemeanor probationers. CSRA has a contract with the county to provide these services and that contract expires on July 1, 2017. A renewal contract of the same terms and conditions was approved by the board and signed by Chairman Paulk.

The names of the appointees to county boards and commissions were also announced and approved at the regular meeting. Several positions are expiring June 30. JoAnne Lewis was reappointed to her position on the Unison Behavioral Health Board. Tim Thomason was reappointed to the Douglas-Coffee County Planning Commission, Jimmy Roberts to the Family and Children’s Services Welfare Board, and Will Ellison to the Georgia Forestry Commission.

Bids were reviewed at the pre-meeting work session and at the regular meeting the board approved the purchase of road equipment from Flint Construction & Forestry of Albany instead of Yancey Bros. Flint had offered the lower bid. All three pieces of equipment will cost the county $587,000. The two used motor graders and the backhoe which are being replaced are to be auctioned by Ritchie Bros. Auctioneers. Ritchie Bros. is waving the commission because it is their first time doing business with the county.

The commissioners approved a resolution making July 15, 2017 Joe Farris Day. The resolution honored Mr. Farris and made note of his distinguished volunteer record which includes 58 years as the “St. Judes Santa.”