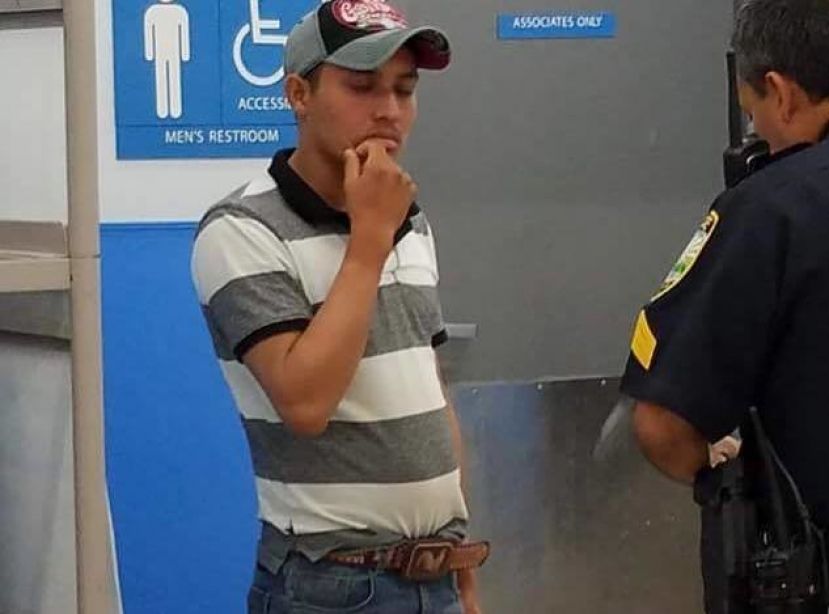 Photo courtesy of the Coffee County Ga Police Scanner Facebook page The unnamed male subject involved in Monday's incident in the women's restroom at Wal-Mart speaks with police. No charges have been filed in the incident.

Monday, a suspicious incident took place inside the women’s bathroom at the Wal-Mart store in Douglas. The incident involved a male who was in the women’s bathroom and a female subject who was armed. Several accounts of the incident have been floating around on social media. Tuesday, the Douglas Police Department issued a statement on its Facebook page explaining, or at least attempting to explain to the best of the department’s ability, exactly what happened.

Here is the police department’s statement in its entirety:

“We have been made aware of a post on Facebook regarding an incident which occurred at Wal-Mart yesterday. There are a lot of comments being made regarding this incident and we would like to clarify what took place, the actions made by officers and what actions are taking place. The post mentions someone being robbed. There was no robbery which took place.

“On Monday September 25, 2017 at around 2:12 p.m., officers responded to Wal-Mart regarding a person holding someone at gunpoint in a bathroom. Upon officers’ arrival, they entered the female restroom and found a female with her purse open and her hand on a pistol which was still in its holster. There was also a male in the restroom. The female was keeping the male from leaving. The male was a non-English speaking Hispanic and he spoke to Sgt. Perez regarding the incident and the female spoke with Officer Rewis.

“There are two different accounts as to what took place, with no known witnesses to verify a crime took place. The officers determined there was no probable cause to make an arrest of the male subject based on the available information. Wal-Mart made a decision to ban the male from their store for a two-year period.

“All information was gathered on the subject with the intent of requesting a probable cause hearing with the magistrate office to determine if there is enough sufficient information for the issuance of a warrant for Peeping Tom. The female will be subpoenaed to testify stating her allegations of what took place and the male individual will be able to testify on his version of events. The magistrate judge will determine if sufficient probable cause exists and if so issue a warrant for the arrest of the male subject.

More in this category: « A darling of South Georgia’s peanut industry struggles to find workers City approves run/walk route, seeks a method of financial assistance for those accused of crimes »
Login to post comments