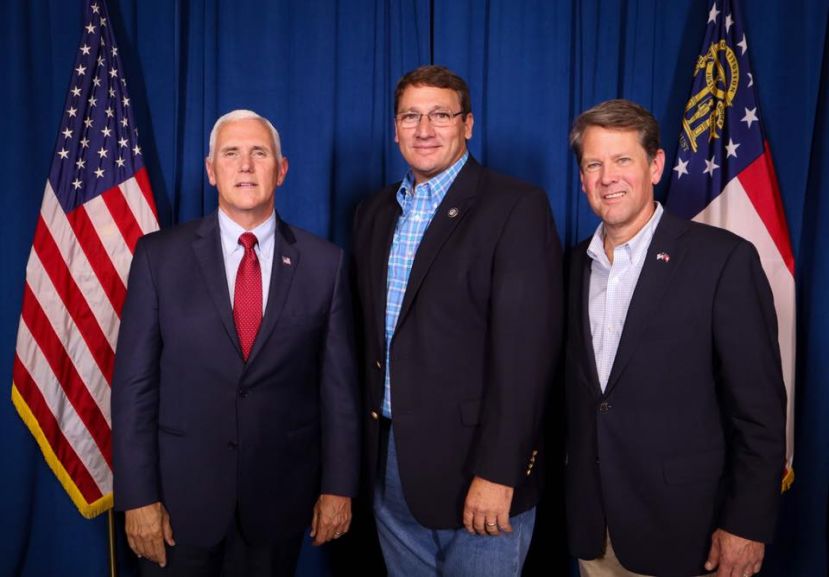 Photo courtesy of Dominic Lariccia's Facebook page From left: Vice President Mike Pence, Rep. Dominic Lariccia, and Brian Kemp
State Rep. Dominic Lariccia, who represents all of Coffee, Bacon, and Jeff Davis counties, has endorsed Brian Kemp for governor of Georgia. Kemp and Lt. Gov. Casey Cagle face off today in a run-off election to decide who will be the Republican candidate for governor. The winner of the race will face Stacy Abrams, the Democratic nominee, in November.
Rep. Lariccia and Kemp, who has served Georgia as a senator and secretary of state, are good friends. Lariccia and Kemp go back 15 years and he calls Kemp "one of the hardest working, honest, and faithful men that I've had the opportunity to work and serve with in Atlanta. I believe that he is absolutely one of those men who wants to be a public servant to the people of Georgia and not a politician."
Kemp's commitment to the citizens of Georgia and his character are why Rep. Lariccia believes that President Donald Trump endorsed Kemp last week. During Trump's presidency, one thing has been clear -- Trump doesn't particularly care for the establishment or the career politicians who put their own interests above those of the people they serve. In Lariccia's mind, that's exactly why President Trump endorsed Kemp -- in Kemp he sees a true public servant instead of a professional politician. "President Trump has very little patience for the status quo and the pay for play politicians like Casey Cagle. Brian's message has been very simple -- to put Georgians first and always do the right thing even when nobody is watching. I believe he has a strategy to do that, whether it's education, healthcare, infrastructure, or economic development," he says. He added that Kemp will keep Georgia conservative in all areas -- in its taxation, its budgeting and appropriations, and in its policy by cutting burdensome regulations and opening up opportunities for small businesses.
Rep. Lariccia encourages everyone to go out and vote today. The polls are open until 7 p.m. at Central Square Complex. "People need to understand how important it is to go and vote," he states. While many people are cynical regarding the importance of their votes, nothing could be further from the truth. The polls are where citizens truly have their voices heard. Run-offs tend to have a lower turnout than primaries or general elections. Rep. Lariccia would like to see this run-off reverse that trend. "When you elect good people at all levels of government, you're putting a barrier in place for you and your family to try and protect and provide for you in government," he says.
Tagged under