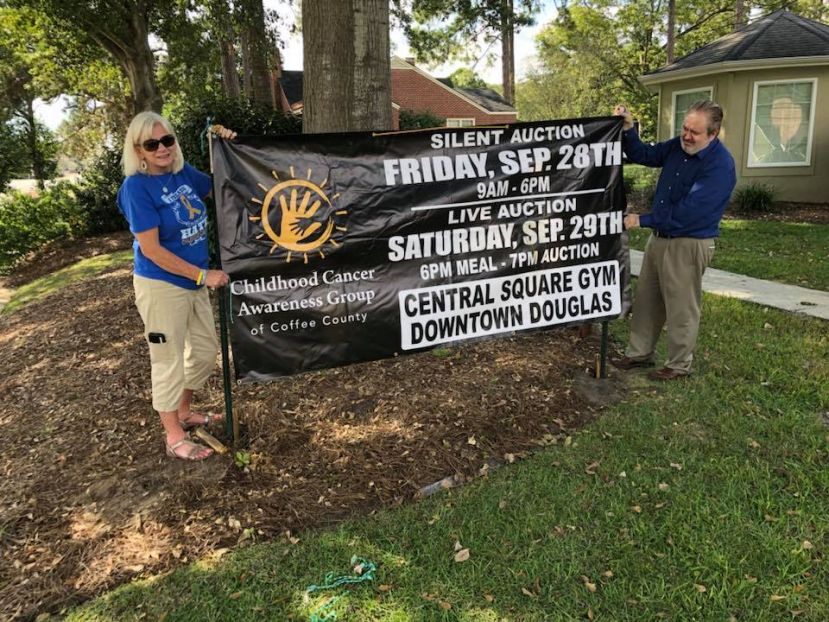 Photo courtesy of Joe Sports's Facebook page Supporters quickly offered private locations for banners after the city removed several banners from rights of way this week. The first one was placed on the lawn of the offices of Tender Care on Ward Street. The CEO of Tender Care, Jonathan Lewis, helped install the sign with one of the founders of CCAGCC, Ronda McNeil-Sports.

Earlier this week, the City of Douglas removed several different banners from the sides of roadways in town. Many of the banners were announcing this weekend’s annual Childhood Cancer Awareness Group of Coffee County’s fundraiser. The CCAGCC is an important local organization that performs a tremendous work throughout the community. The banner removals resulted in a great deal of discussion on social media. To address the issue, the city released the following statement:

The City of Douglas would like to issue an apology to several organizations in the community who were not aware of the roadside banner ordinance. Due to numerous banners/signs causing clutter at intersections and not being removed after events, the Georgia Department of Transportation became concerned with banners becoming a nuisance and causing distractions for drivers.

Earlier in 2018, after several attempts to allow non-profit organizations to place banners at the roadside were not agreed upon by the Georgia Department of Transportation, the city had no choice but to uphold Georgia D.O.T.’s request to remove any roadside banners or signage when placed improperly on right-of-way and city property. It is not the city’s intent to “target or police” any organization’s banner. When banners are removed, the city’s Code Enforcement office receives a complaint and then sends an employee out to remove the banners. If a phone number is on the banner, attempts are made to contact the organization. If no phone number is on the banner, then the banners are placed in storage until the organization retrieves the banners.

The city has plans to install digital signs at the gateway locations, hoping to allow the community an opportunity to share major events though this media. As an option, organizations should seek opportunities to display banners on private properties in locations that do not create a line of sight issue. The City of Douglas supports local events and organizations and the city sincerely apologizes for any inconvenience this enforcement of the banner ordinance has caused  local organizations. For more information about signage within the City of Douglas, https://library.municode.com/ga/douglas/codes/code_of_ordinances?nodeId=PTIIIUNLADE CO_CH10SI_11SPPUSI.