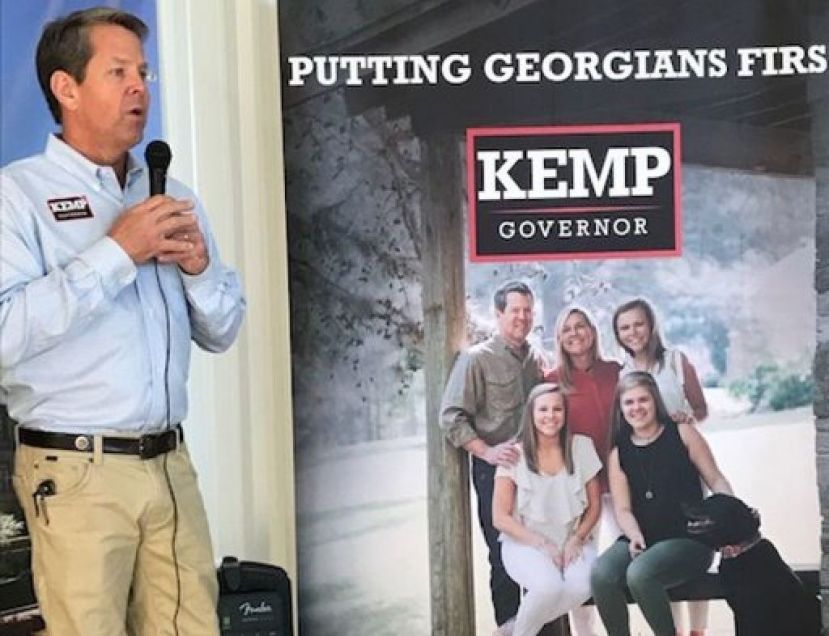 Robert Preston Jr./DouglasNow.com Republican candidate for governor Brian Kemp, pictured above on a campaign stop in Douglas, gained votes in Coffee County after a card was discovered left in a machine Tuesday night.

During the vote tally at the Coffee County elections office Tuesday night, one voting card was left in a machine, which means those votes were not transmitted to the Secretary of State’s office that night. The votes were, however, included in the local returns posted at the elections office in Douglas. Officials discovered the oversight Thursday afternoon -- about the same time as an attorney with the Stacey Abrams campaign called out Coffee County as one of four Georgia counties with alleged voting irregularities.

However, the oversight local officials uncovered and the alleged irregularities mentioned by Abrams’s attorney are two entirely different matters. Abrams’s attorney stated that Coffee County’s election returns showed undervoting, which occurs when voters do not fill out a complete ballot.

All the races were affected by not transmitting the votes. Since the governor’s race is the one everyone is looking at, here is how the updated numbers changed that election. The original vote count that was transmitted was 8,195 votes for Brian Kemp and 3,344 for Abrams. The updated count changes it to 8,920 for Kemp and 3,618 for Abrams. The percentages went from 70.69 and 28.84 to 70.82 and 28.72, respectively.

The issue raised by the Abrams campaign – undervoting – is one that occurs in every election. In many cases, people fill out incomplete ballots. There is nothing on a ballot that requires each voter to fill out a complete ballot. Voters often cast ballots in races they are familiar with and skip others. And not everyone who voted cast a ballot in the governor’s election. There were 12,596 votes cast in the race for governor. However, there were 12,647 voters who participated in the election, meaning 51 local voters did not cast a ballot for governor. In the Secretary of State’s race, 12,320 voters cast ballots, meaning 327 people didn’t vote in that particular race.

The election is not considered complete and official until it is certified, which will take place later on Friday.

It remains unclear how the Abrams’s campaign’s allegations of undervoting in Coffee and other counties will affect the election, if at all.

More in this category: « SGSC to offer a Bachelor of Science in Education degree in collaboration with UNG Here are a few local drug arrests over the last week »
Login to post comments