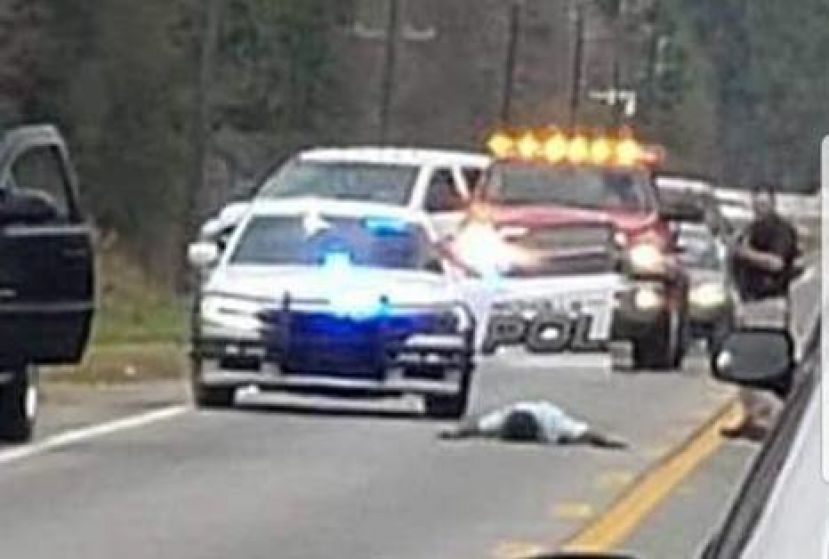 Photo courtesy of the Coffee County Ga. Police Scanner Facebook page Officers detain one of the three individuals in a vehicle stopped outside Nicholls Tuesday afternoon. Willie Robert Wade, who is not pictured, fled the scene during the traffic stop, which led to a multi-agency manhunt. Wade was apprehended fairly quickly.

A multi-agency manhunt took place near Nicholls Tuesday afternoon after an Alma man ran from police during a traffic stop.

According to Nicholls police chief Jamie Merritt, he attempted to stop a black Chevrolet Tahoe speeding through town Tuesday afternoon. The driver, Terrence Brackins, didn’t stop until he was a couple of miles west of Nicholls. Initially, he stopped in the middle of Highway 32. Chief Merritt told Brackins he had to get out of the road; Brackins then pulled off of the road onto the shoulder.

When Brackins pulled over, a passenger, Willie Robert Wade, jumped out of the vehicle with a gun in his hand. He then ran through some old chicken houses and into a wooded area. The Ware County K-9 Unit brought a bloodhound to the scene and followed Wade’s scent, leading officers to him. Wade was apprehended without incident. Officers also found Wade’s gun in one of the chicken houses. Chief Merritt stated that Wade admitted to throwing drugs down as he fled; however, officers were unable to locate any drugs along the path Wade took.