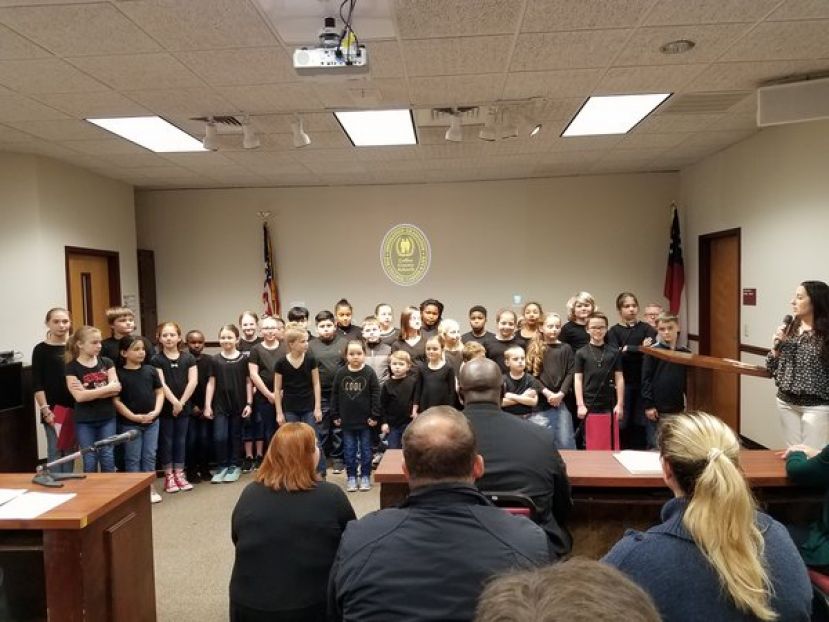 Bradley Bennett/DouglasNow.com The Nicholls Elementary Show Choir sings for the board of education last Thursday night.

At the regular Coffee County Board of Education meeting Thursday night, newly elected District 1 board member Tonya Wilkerson took her seat for her first meeting since voters elected her in July. She replaced Leola Johnson, who had been appointed after Ronnie Johnson passed away.

During the work session the Board took up discussion of finances. The financial report was presented by Mr. Tom Owens of Raymond James. The total expenditures for the year ending December 31, 2018 were given as over $25,000,000. The acceptance of the financial report as presented was placed on the consent agenda.

Next in the work session the Board undertook discussion of out-of-state travel. It was proposed that there would be two elementary school student groups going to a science and history museum. This proposal also was placed on the consent agenda.

In the work session the Board also discussed the purchase of a vehicle for the use of the school safety officer. Officer Chris Elrod addressed the Board and stated that, “My number one goal is to keep our students safe.” He further stated that the Dodge Durango he uses in discharging his duties is on loan from the Sheriff’s Department. Superintendent Dr. Morris Leis recommended that the Board pay for a Chevrolet Tahoe from general funds. This proposal was in turn placed on the consent agenda for the regular meeting.

The Board next considered implementation of a new school calendar, one in which the students return to class on August 9. Discussion of this proposal is slated to continue at next month’s board meeting.

The Board began its regular meeting at 7:30 PM. The Nicholls Elementary School Show Choir, consisting of 3rd, 4th, and 5th graders, was introduced by Nicholls Elementary Principal Lori Bratcher. The choir sang “12 Days of Winter” for the Board, a song of gratitude to the Board and to the people of Coffee County for Nicholls’ new elementary school facilities.

Next the Board recognized School Nutrition Director Betsy Martin with the Golden Radish Award. Ms. Martin and her staff accepted the award. The Board also recognized Premium Peanut. That business has funded an incentive program for advanced placement students which has donated $10,140 to Coffee High School. Premium Peanut Chief Financial Officer Marshall Spivey and Vice President Julee Brooke Lewis were in attendance representing Premium Peanut. Superintendent Leis thanked Premium Peanut President Karl Zimmer for providing the impetus for the donation. Principal Rowland Cummings and Assistant Principal for Instruction Rhonda Dorsey were present on behalf of CHS.

Next the Board approved the consent agenda from the work session and retired from the public meeting room in order to enter into executive session. Returning from executive session Superintendent Leis announced that the Board had accepted the personnel and substitute teacher list as submitted. The Board then adjourned its regular meeting.