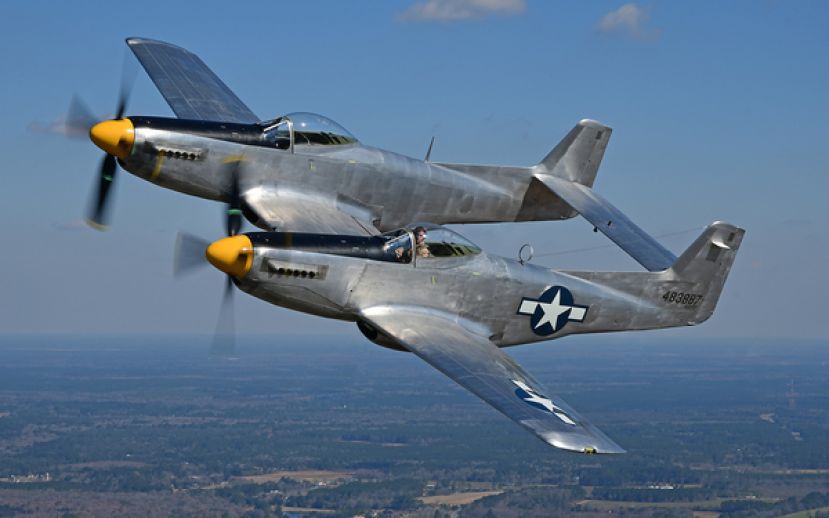 Anyone present in Coffee County over the last few days may have been startled by the sight and sounds of an incredibly rare vintage aircraft. Anyone that has been exposed to the plane is instantly aware that it is a most special artifact of a different time. The plane’s unique pedigree and singular provenance make it truly an object of wonder.

The XP-82 was intended to serve as escort for bombers flying from Saipan to Japan during World War II. Single-engine P-51 Mustangs did not have the range necessary to fulfill that role. A P-51 flying from Saipan to Japan would return to Saipan with only five gallons of fuel left.  General Henry H. “Hap” Arnold was head of the U.S. Army Air Corps during WWII. He approached North American Aviation - the manufacturer of the P-51 Mustang, the B-25 Mitchell, and the F-86 Sabre - in November of 1943. He said he wanted a Mustang with two engines, six hours more range, and 50 mph more speed. All this was required to keep up with the high-flying B-29, a piston-driven bomber capable of cruising speeds of 330 mph and altitudes as high as 35,000 feet. The XP-82 had six .50 caliber Browning machine guns mounted in the center wing. It was a purpose built killing machine that could fire 4,200 rounds at an enemy per minute. At this rate the pilot would be out of ammunition after 24 seconds of steady firing.

On April 15, 1945 the first prototype, built to the specifications of Gen. Hap Arnold, was finished. The XP-82 in Douglas has great historic value as it is the very first prototype XP-82 to fly. The aircraft spent the years between 1945 and 1950 in Cleveland, Ohio at the National Advisory Committee for Aeronautics (NACA). NACA was the precursor to today’s NASA. In 1950, during an icy landing, the XP-82 was bent badly. It was soon thereafter sold for scrap and cut up with a chainsaw. What remained of the plane was parked on a ranch in Newbury, Ohio from 1951 until 2008. Tom Reilly bought what was left of the plane in 2008. It took ten and a half years to restore. It flew again, for the first time in 69 years, on December 31, 2018.

The Rolls Royce engines in the XP-82 were built by Packard Motor Car Company in Indianapolis, Indiana. The heads and blocks are aluminum with steel cylinder sleeves, as well as steel camshafts and crankshafts. Each engine has a gear-driven supercharger and is configured as a V-12. They each displace 1,650 cubic inches, produce 1,860 horsepower, and weigh 3,000 pounds. The Rolls Royce Merlin is widely regarded as one of the best engine designs of World War II.

Tom Reilly is a native of New Jersey. He is the owner of the XP-82. Deeds Simonsen of White Salmon, Oregon is an investor. Both Mr. Reilly and Ms. Simonsen spoke at length with DouglasNow.

According to Mr. Reilly the plane has required 207,000 man and woman hours of labor to become airworthy. Mr. Reilly has been in business for 47 years and formerly operated a plane restoration company in Kissimmee, Florida. Hurricane Charlie dealt his business, Tom Reilly Vintage Aircraft, Inc., a serious blow in 2004 and in 2005 he decided to move to Douglas. He had spent twenty years in Kissimmee, and prior to that he was based in Orlando. The XP-82 is Mr. Reilly’s 35th major restoration.

Ms. Deeds Simonsen has been in love with aviation since eighth grade in Oregon. As a child Ms. Simonsen helped her uncle restore Packards while she spent summers at her grandparents’ home in Redmond. Ms. Simonsen and her husband of five years Josh, a native of Orofino, Idaho, are both here in Douglas to help with preparations for the first flight of the XP-82. But in a larger sense, they are here in service of history itself.

As Mr. Reilly and Ms. Simonsen spoke with DouglasNow they were hooking up the last connections for the original World War II-era radio in the XP-82. The original radio is not for practical use, but to ensure the complete authenticity of the restoration. The XP-82 features modern communications equipment.

Mr. Reilly said that the plane had a nice flight earlier in the week, which makes six total flights so far. The plane will continue to fly in the airspace over Douglas. Mr. Reilly told DouglasNow, “Keeping this plane in the air is about keeping history alive.” Ms. Simonsen told DouglasNow how she came to be involved. It’s all due to Mr. Hucke.

Mr. Hucke was her eighth-grade history teacher in The Dalles, Oregon. Mr. Hucke gave young Deeds Simonsen an assignment: Write a report on the history of the local airport. In writing this report Ms. Simonsen learned of her local airport’s role in the effort to win WWII. The airport was utilized in training B-25 Mitchell pilots. Young Ms. Simonsen told her eighth-grade teacher that she wanted to one day fly a B-25 bomber.

In 2009 Deeds Simonsen flew a B-25 Mitchell with Reilly, a B-25 instructor. Her dream had come true. She was able to contact Mr. Hucke and tell him that the dream he had helped to instill in a young girl all those years before had become a reality.

The upcoming April issue of Air Classics magazine will feature an article about the XP-82. But Douglas residents need only watch the skies in order to see a most remarkable and unique historic aircraft.