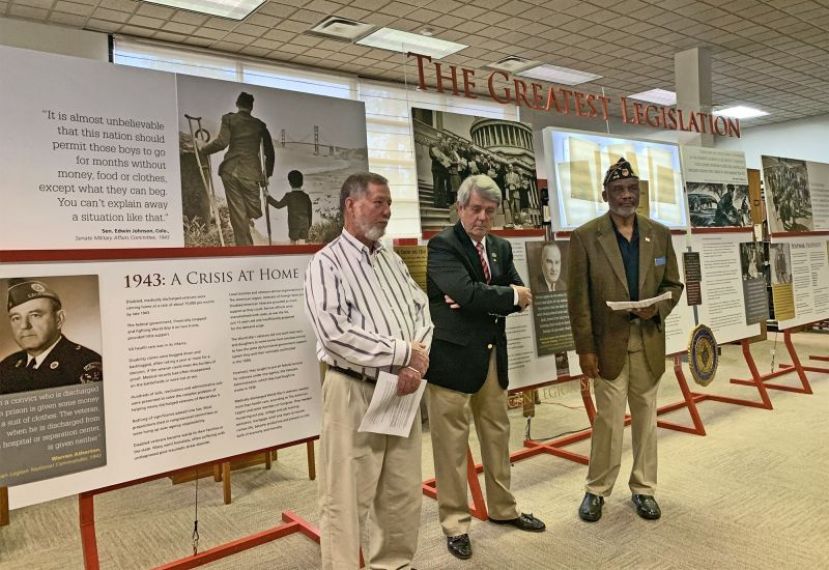 “The Greatest Legislation: An American Legion Salute to the GI Bill” has arrived at the Satilla Regional Library. The display is traveling to multiple sites throughout the country and this is the first stop in Georgia.

U.S. Rep. John Gibson from Douglas saved the GI Bill, formally known as the Servicemen’s Readjustment Act of 1944, from being defeated. The bill, which The American Legion drafted and endorsed, nearly died in committee. To ensure its passage, the bill’s supporters needed one more vote to get it to President Franklin Roosevelt’s desk by June 22, 1944. The final vote was set to take place on June 9, 1944 – right after D Day had taken place.

Rep. Gibson had left Washington but instructed Rep. John Rankin of Mississippi to cast a proxy vote in favor of the bill. Rankin, however, refused, primarily because the GI Bill granted equal access to both whites and African Americans. Without Gibson’s vote, the bill would never make it out of committee.

Gibson needed to get to Washington in a hurry to cast that all-important vote. However, Rep. Gibson was nowhere to be found. What resulted was a statewide search that involved radio announcements, phone calls, and law enforcement notifications to find Gibson. When he was finally located, troopers escorted him at high speeds in the middle of a driving rain to get him to Jacksonville, Fla., where a plane was waiting to fly him to Washington. He made it by the deadline, cast the deciding vote, and President Roosevelt signed the bill into law. It has since been called the most significant piece of legislation Congress passed during the 20th Century. It transformed the middle class and, in turn, transformed the nation.

The display at the library features a number of important documents and an interactive screen that highlights the importance of the bill. The original cover and signature page of the Servicemen’s Readjustment Act of 1944, better known as the GI Bill, will be showcased, among other important papers and photos. The original documents, on loan from the National Archives, along with the typed and hand-edited speech given by President Roosevelt after signing the historic GI Bill of Rights, are on loan from the Franklin D. Roosevelt Library, will be on display through March 12.

More in this category: « CRMC, school system to address cyberbullying on March 5 Fatal In and Out shooting justified, no charges to be filed »
Login to post comments