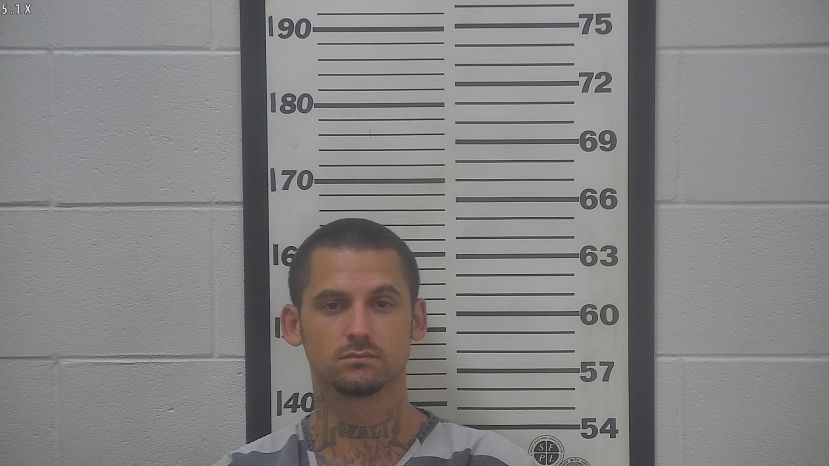 Photo courtesy of the Coffee County Sheriff's Office Rocky Doyle Oliver (above) was arrested twice last week -- once on July 4 and again on July 9.

Officers from the Coffee County Drug Unit and detectives make numerous arrest over the last two weeks that ranged from the possession of drugs and firearms to fugitives from justice.

On Wednesday, June 26, 2019 at approximately 4:30 p.m., Coffee County deputies attempted to conduct a traffic stop on a vehicle for a traffic violation.  The vehicle failed to yield to the officers and continued to travel for a short period of time, during that time it appeared that the passenger of the vehicle attempted to discard unspecified packages out of the window before coming to a stop.  Officers recovered the packages and discovered quantities of suspected cocaine. The driver, identified as Kareem Sharod Blank, and the passenger, Roland Terry Barnes, were arrested.  Ronald Terry Barnes was charged with possession of cocaine and abandonment of a dangerous drug, Kareem Sharod Blank was charged with possession of cocaine, obstruction of a law enforcement officer, and failure to obey a stop sign.

On Thursday, July 4, 2019 at approximately 2:00 a.m. Coffee County deputies conducted a traffic stop on a vehicle for a traffic violation.  During the stop, officers discovered the driver, identified as Rocky Doyle Oliver, was operating the vehicle without a valid license.  After a brief investigation, deputies discovered the other two passengers to be in possession of methamphetamine.  Oliver was arrested and charged with driving without a valid license, no proof of insurance and violation of tail light requirements. A second passenger in the vehicle was identified as Sara Lynn Baldree. She was arrested and charged with possession of methamphetamine and the third passenger, Guillermo Sanchez, was also arrested and charged for possession of methamphetamine.

On Tuesday, July 9, 2019 at approximately 12:52 a.m., the Douglas Police Department conducted a traffic stop on a vehicle for a traffic violation.  During the stop, the driver, identified as Devin Cole Edwards, was found to have an outstanding warrant from Bacon County for probation violation.  The passenger, Rocky Doyle Oliver, was asked to exit the vehicle. As he exited the vehicle, the officers noticed him attempt to discard a package.  The officers retrieved the package from the roadway and discovered quantities of methamphetamine inside. Oliver was arrested and charged with possession of methamphetamine.

On Tuesday, July 9, 2019 detectives with the Coffee County Drug Unit received a request for assistance in locating a fugitive from a Ben Hill County possibly located in the Coffee County area.  Both agencies worked together and located the subject, identified as Markevious Demond Jenkins, of Ocilla.  At approximately 1:30 p.m., agents located and arrested Jenkins with no incident.  A search incident to arrest was conducted and Jenkins was found to be in possession of quantities of ecstasy and a firearm.  Jenkins was arrested on an outstanding probation warrant form Ben Hill County. He also faces charges of possession of ecstasy, possession of a firearm during the commission of a crime and possession of a firearm by a convicted felon.

On Tuesday, July 9, 2019 at approximately 4:22 p.m., the Department of Community Supervision contacted the Coffee County Sheriffs Office to assist in arresting and transporting a subject.  Kelly Marlette Thomas reported to the probation office unaware of having an outstanding warrant for her arrest.  The deputy arrived shortly after and arrested Thomas.  A search was conducted and cocaine was discovered in Thomas’s pocket.  Kelly Marlette Thomas was arrested on a probation warrant and faces an additional charge of possession of cocaine.