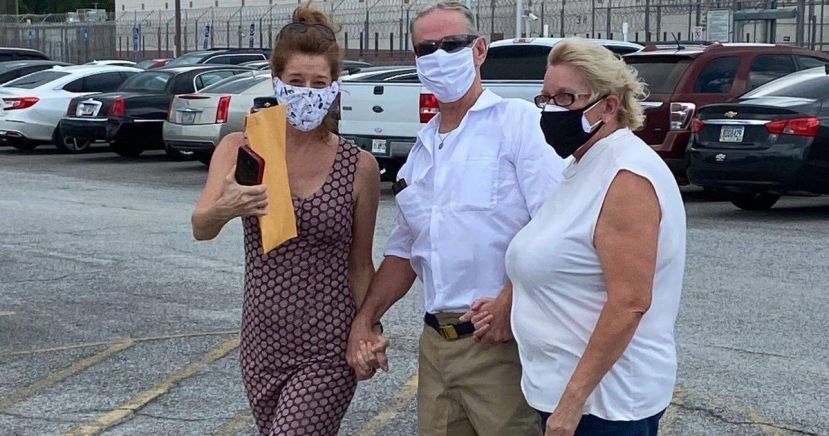 Photo courtesy of the Georgia Innocence Project Dennis Perry walks free from Coffee Correctional Facility Thursday after his murder conviction was overturned. He served 20 years in prison after being convicted of two murders he did not commit.

For the second time this year, an inmate at Coffee Correctional Facility in Nicholls has been released because his conviction was overturned. Thursday, July 24, 2020, Dennis Perry, who had been in prison for 20 years after a jury convicted him of killing two people in Camden County, walked free after a judge overturned his conviction.

Because Perry was being held in Nicholls, several motions were filed in Coffee County. According to documents obtained from the Coffee County Courthouse, Perry was convicted because “the State lost, withheld, and actively suppressed critical exculpatory, impeachment, and other favorable evidence in violation of his constitutional rights and then wielded the threat of the death penalty in an effort to try and shield the prosecutor’s misconduct from appellate review.”

On March 11, 1985, someone shot and killed Harold and Thelma Swain inside Rising Daughter Baptist Church in Waverly, Ga. The Swains, who were African-American, were killed by a white man. For almost 15 years, the murders went unsolved. Then, on Jan. 13, 2000, Perry was arrested. Despite having an airtight alibi (Perry was in Atlanta working the night of the murders) and being excluded because of DNA evidence (investigators found a pair of glasses at the scene believed to belong to the killer that contained two hairs; DNA could not connect Perry to the glasses), Perry was convicted. The conviction came primarily from the testimony of one witness, Jane Beaver, the mother of Perry’s ex-girlfriend. Beaver identified Perry from a composite drawing of the shooter. She also said she heard Perry say that he was going to kill Harold Swain because he attempted to borrow money from Swain but Swain refused. As a result, Perry said, according to Beaver, that he was going to kill him.

During the investigation, officers keyed in on Donnie Barrentine, a convicted drug dealer who had allegedly bragged about killing the Swains at a party. A church member who was at the scene on the night of the murder picked Barrentine out of a line-up and Barrentine failed a polygraph test. Investigators presented a warrant for Barrentine’s arrest to District Attorney Glenn Thomas; however, Thomas wouldn’t sign it.

In 1998, a new investigator re-opened the case. Much of the evidence had been lost, including information related to Perry’s alibi. As a result, Perry was arrested and charged with two counts of malice murder. During the trial, prosecutors relied on Beaver’s testimony; they refused to let the defense know that Beaver was seeking a reward for information that led to a conviction in the case. Beaver eventually received $12,000 for her testimony.

After being convicted, Perry agreed to waive his right to appeal in exchange for two life sentences if the State wouldn’t seek the death penalty. Throughout the entire ordeal, Perry always maintained his innocence.

According to the Georgia Innocence Project, in April, DNA collected from another suspect (the GIP site didn’t name him specifically) proved to be a 99.6 percent match with the DNA on the glasses.

As a result of the new developments, last week, Superior Court Judge Stephen Scarlett granted Perry a new trial. He also agreed to release Perry from prison and Thursday, Perry walked free for the first time in nearly 20 years. His ordeal isn’t over yet but at least he can work through the rest of the process from home with his family instead of in a jail cell.